Q&A: Craig Ferguson on late-night TV and its latest shifts

As Stephen Colbert and Trevor Noah prepare for their spin on the late-night carousel, an ex-host discusses the tricks of the trade 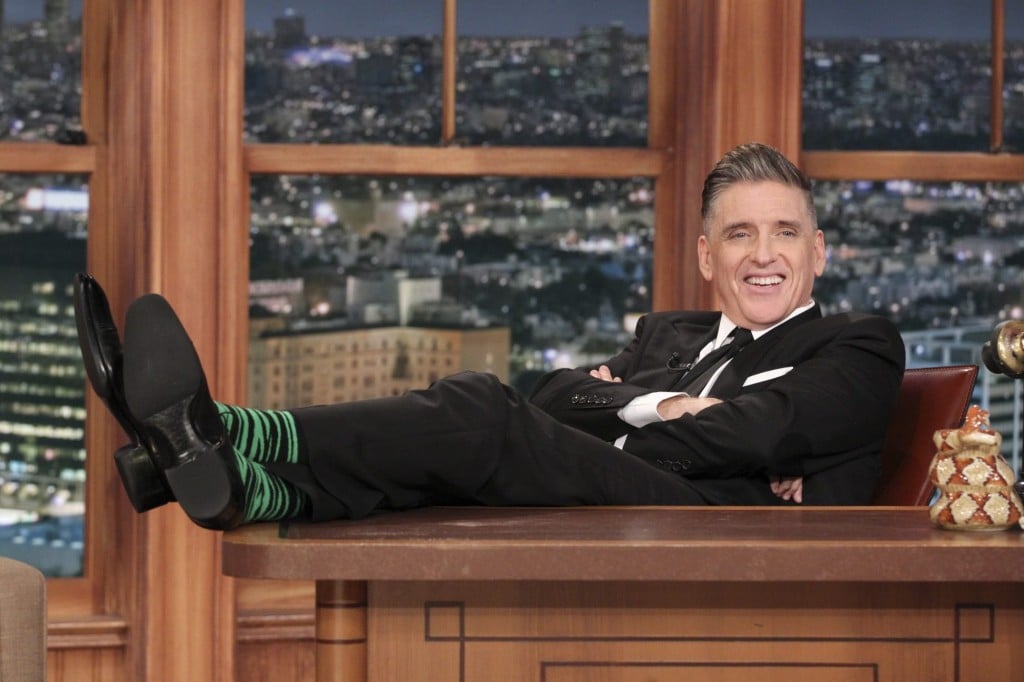 In this image released by CBS, Craig Ferguson, host of “The Late Late Show with Craig Ferguson,” appears at the taping of his final episode airing Friday, Dec. 19, on CBS. (AP Photo/CBS, Sonja Flemming)

For nearly a decade, it was one of the best late-night shows that no one was talking about. The Late Late Show with Craig Ferguson was a zany, heartfelt show that would bounce between theatre of the absurd (Ferguson’s regular sidekicks were an animatronic skeleton and a pantomime horse) to the emotional (improvised on-air tributes to his late mother, his late father, the victims of the Boston Marathon bombing). Then again, late-night is essentially absurd—Ferguson just played with that to its very limits. Airing each night on CBS after the once-subversive Late Show with David Letterman, his show was like a refreshing tonic; with his trademark free-wheeling riffs, he would rip up his producers’ prepared cue cards and engage his celebrity guests in honest dialogue. The show even won a Peabody Award for his incredible interview with Archbishop Desmond Tutu—a perfect encapsulation of the kind of brilliant yet unheralded talk-show host he was before the show ended in December 2014.

These days, though, late-night TV is again in the zeitgeist. Stephen Colbert is set to take over Dave Letterman’s Late Show on Sept. 8, and Trevor Noah will take the helm of The Daily Show from Jon Stewart on Sept. 28. So who better to give insight into what it takes to be a host on late-night than someone who’s spent years behind such a desk?

Related: Why Trevor Noah is the right pick for The Daily Show

When Maclean’s reached Ferguson, who is now hosting Celebrity Name Game, it was on a sweltering day in Los Angeles, where he said it was so hot, he was afraid to get out of the car. “This, in Scotland, would be a fire,” he said in his marbled Scottish brogue. “You can bake potatoes in the air.” He spoke to us about what he would tell any new late-night host, the hardest part of the job, and why he doesn’t miss the high-profile gig.

You have a rather unique perspective on the late-night scene—and when you think about it, there aren’t many people who can say they’ve been a late-night show host on network TV. It’s a hard job to get, and there are only a handful of such jobs at one time—it’s a kind of fraternity, in a way.

A: I guess, although I’d say—not really, because I never really socialized or was part of—I know it looks like a group when you’re working on TV, but it’s not really a group of people. All these people work individually from each other. So it’s not like you’re in a band going from town to town doing gigs. So I think it looks more like a coterie of people than it actually is.

It’s been eight months since the show ended. You sort of have to think you’d miss it even a little bit?

A: No—here’s the thing, you have to think I miss it, but you didn’t have to do it for 10 f–king years! I’m telling you, I don’t miss it. And it’s very hard to explain to people. People want you to miss it. I’m glad I did it, don’t get me wrong. I loved it, I’m very grateful that I had the job, it was great fun. But I don’t miss it. I don’t kind of pine for it. I don’t think I would ever do it again, but it was great. I don’t think I’m in any way, shape or form desperate to do it again.

What people don’t understand about your decision to quit, to not seek the Letterman show job, is that late-night is this prestigious thing, and the sort of human, natural thing is to seek a promotion, to keep doing the prestigious thing.

A: I think you hit the nail on the head with “the natural thing.” I don’t know how much of a natural human I am. Y’know, the truth is, I never set out to do that, and I don’t think of myself like that. I don’t think like that. It’s not really about promotion—I don’t really understand the idea of promotion, talking to a camera for more money. That’s just money. And I like money, don’t get me wrong. I don’t know. I don’t get it. I don’t understand it as much as you don’t understand me, I think.

What was the hardest part of the job?

A: Doing it every day. Or doing it when something terrible happened in the world, which of course happens with alarming frequency. And there are times when you see the news, and you go, “How the hell am I meant to do anything tonight?” I’m not good at compartmentalizing myself and not being affected by the world around me, so it was very difficult for me when atrocious news stories would pop up. And I would think, “How the hell am I supposed to talk to the skeleton about the horse tonight?”

That was the kind of thing you did so well. And for whatever reason, people do come to late-night for a debriefing from the day, potentially for healing—it’s at night, after the events of a day, and you’re one of the last people that many are coming to. Did you feel a responsibility to entertain and do that kind of healing, as well?

A: Yeah, a little bit. I also felt that, as time went on, an audience gets to know you and in a weird way, you kind of feel like you get to know the audience a little bit. When I’m doing stand-up gigs now, I feel like I’m doing gigs in front of people I know. I think that’s the result of doing late-night shows for so long. I think that everything looks a little scarier at night, when the sun goes down. And I know I kind of want a sense of reassurance or a community. Late-night is a rare place because that’s what we do. Increasingly, I felt like I didn’t want to be that guy. I didn’t want to do that. It wasn’t the only reason that I stopped doing it, but it was a consideration—I didn’t know how to process tragedy after tragedy and then … it just got too much, I think.

That may be what it does best. But there is the question: Does the late-night format still matter?

A: I don’t know. I never watched my own show or anybody else’s when I was doing late-night. It’s someone else’s problem. I understand you want me to feel a deep connection to it, but I don’t. I don’t feel a connection. I did my show and I feel like what we did with that show, that was unique, that was our thing, and then I dropped the mic, and I moved on.

Do you have any advice for the new guys—Stephen Colbert, Trevor Noah?

A: I wouldn’t dream of [doing that]—these guys don’t need my advice. They’re talented, clever individuals, they’ll be fine. The only thing that I would say to anyone doing it is—it took me a couple years then—but when you leave the studio, it’s over. That’s what you really have to do. After a long time, I would be like, “Maybe I shouldn’t have said this,” or “Maybe I shouldn’t have shown this.” But eventually, I got to, “Ah, f–k it.” That’s what it was that night, tomorrow’s the next night.

So, just to be clear—there’s nothing you miss about late night.

A: I think what it is is—look. I think maybe there’s a mystique about it. You know, what Bono said about music. He said, ‘If you love music, it’s kind of like you love sausages. You probably shouldn’t know how it’s made.’ And I think that’s kind of late night and a bit movies and everything. I love movies a lot more before I was in a bunch of them.

I don’t want to come across as ungrateful—I loved it. But it’s over. And it’s okay for it to be over. And I think sometimes people get fixated on it. It fascinated me maybe a little more than it does now because I’ve done it for so long. Garry Shandling said it: “there’s only one thing crazier than being on TV every day, and that’s wanting to be on TV every day.”

Ferguson’s “New Deal Tour” will be stopping at five Ontario cities between Sept. 30 and Oct. 4, including at the JFL42 Festival in Toronto. His stand-up special, “Just Being Honest,” premieres on Sept. 10 on EPIX.