The Real Housewives of Vancouver: More booze than brains

In our episode 8 recap: what you need to know about 'glamping' 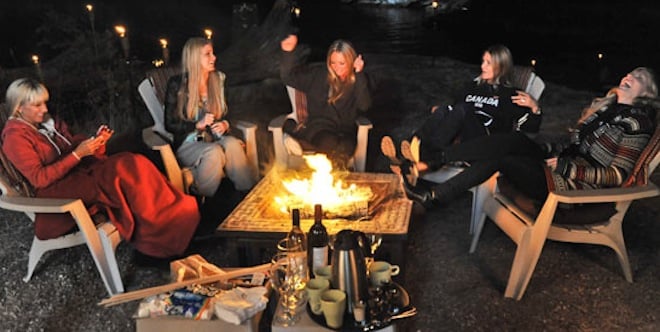 Thankfully, for all of Toronto at least, the Housewives are back on the West Coast this week where we’re taken straight to matriarch from hell, Jody’s house.

Jody has Robin over and immediately starts to dig into Robin’s alliance with Mary. “I’m not going to stand here and pretend I’m unintelligent,” she says (I didn’t realize it was an act). “Mary is Lucifer, she’s a terrorist.”

Unable to convince Robin, Jody writes her off. Interestingly, she also rants about how Mary has tried to mess with her business. This week, Vancouver media reported that the Animal Liberation Front vandalized Jody’s fur-selling West Vancouver boutique (Karma: 1, Jody: 0). She blamed the attack on Mary for publicizing the fact that she sells fur, though perhaps the giant mink coats, Russian trapper hats and feather boas she sports around town are also a giveaway.

Mary, meanwhile, bids farewell to her son Cole, who is moving to New York to pursue an internship with former President Bill Clinton. She’s sad that he’s leaving but it’s nice to see her cry about something other than Housewives-related rubbish.

Speaking of rubbish — over at Ronnie’s place, a psychic named Char is invited to do readings on Ronnie and Amanda.

Char asks Ronnie if there’s an “R” person that might be present — Robert or Rose maybe? Ronnie assumes it’s her grandmother’s sister, Rose, whose spirit is present. Char then mentions a female with an “M” name — “like a Mary?”

“I feel she doesn’t get you,” the psychic advises, at which point I momentarily stopped watching because my eyes rolled into the back of my head.

There wasn’t a single piece of information gleaned that this woman couldn’t have picked up from watching any of the many episodes of Housewives, or frankly even doing a quick Google search on the car ride over. But Char does mention sensing that “someone” is “chemically imbalanced or alcoholic” — traits that Ronnie has on full display later in the episode.

Amanda, next in line for a reading, bursts into tears when Char tells her that she is “one of God’s children.” Again, with the specifics.

Anyway, with a new lease on life, Ronnie decides to have a drama-free birthday party and takes her friends, less Mary and Jody, on a glamping trip — that’s glamour camping for all you 99 per centers.

They head to the Rockwater Resort at Halfmoon Bay, B.C. On the way, Ronnie lets it slip that she and Mary had some kind of one-night stand, but she doesn’t elaborate further, leaving viewers to imagine what horrors took place.

The ladies are greeted by Champagne and snacks, including pineapple, which Ronnie claims has lots of digestive enzymes. 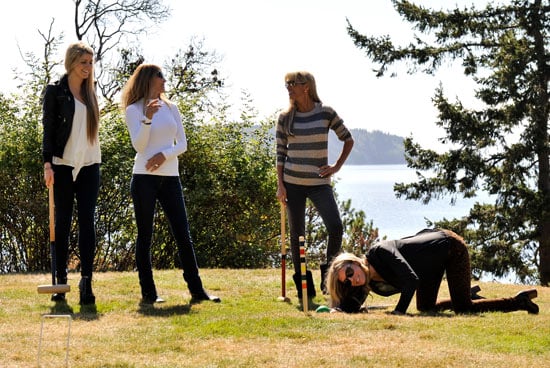 The ladies make their way to their “tents,” which are virtually indistinguishable from a cabin at a four-star hotel, and there’s a lame attempt to play croquet before they settle down for their favourite activity: drinking. Ironically, most of the Housewives have been divorced and that’s exactly what they discuss over more bubbly, with Amanda calling out Robin for being too dense to know when she is being played for a fool.

This is the woman who sobbed when someone told her she’s a child of God.

During a pre-dinner siesta, Robin seizes the opportunity to call Mary from her bubble bath in order to relay the day’s gossip, including the aforementioned tryst with Ronnie.

Mary spouts off her classic denial response but it’s still kind of funny to hear her say, “Ronnie and I have never, ever, ever been intimate.”

The group gathers to eat by the pool and things are pleasant until Robin opens up about her conversation with Mary.

I don’t often agree with Ronnie, but when she says, “Nobody hired you to do this job,” in reference to Robin’s middleman ways, I found myself nodding along.

Still, the mood is peaceful overall. Almost as if she senses this, Jody phones Ronnie and makes a couple of digs at Robin, calling her a traitor and implying that she’s an idiot.

Then things get heavy as Amanda opens up about her troubled youth and being sexually abused as a child and a teenager.

“It’s times like this that we as women come together and become open,” she says, a remarkably wise observation from someone who so relishes stirring the pot.

The trip goes so smoothly that Ronnie wants to keep the celebration going. So, she arranges for herself, Robin and Amanda to take a yacht trip from her beachfront property to Granville Island, where Jody and Ioulia await at Dockside Restaurant.

The trip, in Robin’s words, “is about 40 ounces of vodka long.” She and Ronnie, to whom the proverbial wagon is now a distant dot on the horizon, are completely sauced and Jody is less than impressed. Even Ioulia sticks to drinking coffee. When Ronnie orders shots, Ioulia protests that the vodka at Dockside is no good.

“To an alcoholic, baby, the vodka doesn’t matter,” retorts Robin. And I’m sure she wishes she’d kept her mouth shut because suddenly, Ronnie releases all of her pent-up rage concerning Robin’s friendship with Mary in a manic fit, not unlike what we’ve seen from her in the past.

There’s the rhetorical question, “What did you just say to me?”; the threat, “You f–k with me and I’ll f–k with you,”; rounded out by the nonsensical conclusion, “At the end of the day we’re all here and we’re all alive.”

And that brings us to the end of yet another 60 minutes that we will never get back.