Rick Mercer on Poilievre vs. Trudeau, his new comedy showcase and more

Mercer returns to prime time with Comedy Night With Rick Mercer. “This is a golden age of stand-up comedy. But it's a completely insane occupation.” 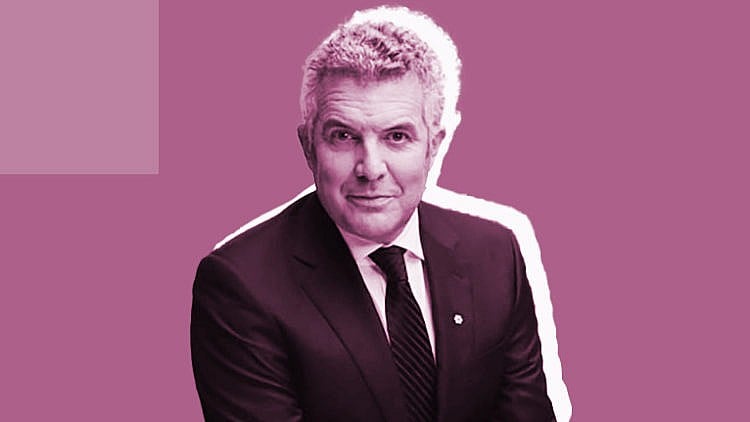 Rick Mercer is back on prime-time Canadian television to showcase top-notch, home-grown comedic talent. Mercer’s Twitter bio—“Anger is my cardio”—is a reminder of his infamous political rants on CBC’s The Rick Mercer Report and This Hour Has 22 Minutes, but Mercer is returning to television in a less heated role: as host of CBC’s new stand-up comedy special, Comedy Night with Rick Mercer. The Tuesday-night series features sets from a stellar lineup of Canadian comics. Juno Award winners Sophie Buddle, Ivan Decker and Dave Merheje are a few of the names who take the stage.

We recently caught up with Mercer to find out what he’s ranting about today, his take on the inevitable Trudeau-Poilievre election battle, his memoir, Talking to Canadians, the new show and more:

Like many industries, the stand-up comedy scene was affected by the pandemic. How important was it for you to create a platform for these breakout comics?

Rick Mercer: When I was a young person in comedy, I was never in stand-up. But there was a CBC TV series called Comics! that gave comedians a chance to showcase their talents in prime time, and it led to a giant comedy boom. It had a huge impact on so many careers, so I think it’s time that that happens again. There’s never been a better time. This is a golden age of stand-up comedy. If you love comedy, there’s so much talent out there right now.

I consider stand-up an art form. I consider all of these individuals to be really hard-working, creative artists. There’s nothing purer. But it’s a completely insane occupation. Who in their right mind would walk out on stage with a microphone and a glass of water and decide to entertain either 30 people in a club or 2,000 people in a theatre? They don’t have a guitar or backup singers, they just have themselves. It’s inherently exciting.

What are you most excited about for people to see in the new series?

The idea of introducing comedians to a broad, prime-time, Canadian audience was really exciting. Now, I want to say, many of these comedians are very well known to lovers of comedy—I’m not suggesting that I’m introducing unknowns. You have people like Sophie Buddle, who is in the premiere episode and is killing it and playing all the big comedy clubs. She’s doing all the big theatres in North America, doing Jimmy Kimmel Live!, killing it at Just For Laughs, and she has a Crave special. Comedian Dave Merheje, same thing—he is killing it everywhere he goes.

Ivan Decker, I believe, is the greatest stand-up comic working today. I mean, he’s literally my favourite comic. Then we have comedians like Derek Edwards and Sean Colin, who travel non-stop in this country and sell out huge rooms. They need no introduction. But it’s great to see them doing what they do best in this format.

In each episode, you sit down for one-on-one conversations with the comedians. What was the intention behind that format?

I like to treat them like stars. People are used to seeing stars getting interviewed that way. So it’s a bit of fun, it’s a bit of a nod to that. It’s also getting to know them on another level. Sophie Buddle was a perfect example. You see Sophie on stage and she has such an incredible story: she started doing comedy at 14 or 15 years of age—her mother would bring her to the open mics and sit there and stand guard over her. So many of these comics have fascinating stories. Abby Roberge does material about growing up in a cult. He was in a cult until he was 16, then he left and decided to go to New York and become a stand-up comic. Here’s a guy you want to sit next to on the plane.

They all have stories, so the small interview segment is a chance to scrape the surface a little bit.

Many people know you for your rants on This Hour Has 22 Minutes and The Rick Mercer Report. What you might rant about today?

Oh, there’d be all sorts of things. I’d be giving kudos to Pierre Poilievre, for such a decisive victory. I think the fact that he won didn’t surprise anyone. The manner in which he won shows an incredibly skilled political operative who’s certainly going to have a huge impact on the next couple of years in Canada. Talk about a person who can manage reputations.

With Poilievre’s recent appointment as leader of the Conservative Party of Canada, there will likely be an election battle between Poilievre and Trudeau in our future. What’s your take on that?

It does seem inevitable: Trudeau is saying that he’s not going anywhere, but of course he has to say that. Trudeau is no fool. He also knows people in his position lose all the time. So while he might relish the fight, he has to know the odds are stacked against him. But Poilievre has to introduce himself to the Canadian public.

For people like myself, who lived and breathed Parliament Hill for a very long time, well, Poilievre was a constant presence. Because, you know, he was elected in junior high. But the average person on the street, they’ve got better things to do. So they’re going to be kicking the tires on Pierre Poilievre over the next couple of months, and we’ll see how that works out.

They’re not kicking the tires on Trudeau, they’re exhausted with him. They’re sick of looking at that car in the driveway.

Since the final airing of The Rick Mercer Report in 2018, have there been any other big Canadian events that you’d wanted to comment on?

Of course, and I do. I just call up my friends, or I rant at my television instead of ranting on television. That said, I feel like my timing worked out very well. I don’t miss it. It’s a very strange time to be in the opinion business. It’s an exciting time too, but I’m glad to be taking a break from it.

In your opening set in episode one of Comedy Night with Rick Mercer, you reference the pandemic. So, how did Rick Mercer spend his time in isolation?

Most people in show business couldn’t work from home—they were out-of-work-from-home. But the thing about being out of work is you can do it from anywhere. So I went to Newfoundland and I went to my cabin and wrote a book. I was eternally grateful for the project, because I’ve never achieved anything in my life without a deadline. And it’s got to be a real deadline. It can’t be a self-imposed deadline—there’s got to be some man or woman on the phone calling me going, “Where is it?” And so that was the case, and I wrote a book. Literally every day I went into my shed at 9:30 a.m., came out for lunch, went back in and would stay until quitting time. It kept me sane.

As the new series continues over the coming weeks, what can viewers look forward to seeing?

Well, I don’t want to say more of the same… except it’s more great comics. I think they’ll be pleasantly surprised week after week. It’s a very funny show and that’s all that matters. I mean, there are so many discussions about comedy these days, what you can and cannot do. The most important thing is, are you funny?

Everyone on this show fits the bill.