Seth MacFarlane and the Oscars

A Star is probably not born

Well, the most important news out of the Oscars is that Ben Affleck thanked Canada. This obviously makes up for everything, including our inability to make our own movies about our stories.

But, I suppose, some non-Canadian stories need to be dealt with. I wrote a piece about whether Seth MacFarlane’s stint as host of the Oscars would establish him as the live-action, onscreen star he clearly wants to be. And after his opening monologue, someone snarked that that piece was instantly dated. Well, the art of predicting the future won’t be perfected until the robots take over. Now, for all I know, the wide reaction to his performance might not have been as negative as it was among people I know – after all, in a world where Identity Thief is a hit, there is no consensus on what’s funny. But if the question was whether MacFarlane could translate his behind-the-scenes popularity into onscreen popularity, then it seems at first blush like the answer was “no.” Even before he held up the ending of a show that was running late to perform yet another musical number. 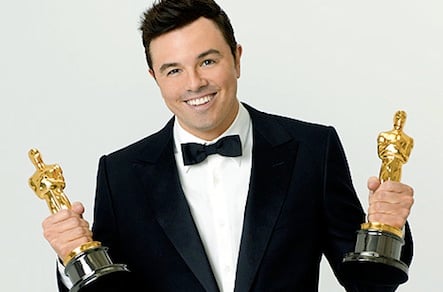 The overall theme of the Oscars, as James Poniewozik noticed when he linked to the promo below, was that it was supposed to be “an Oscars that guys can enjoy.” MacFarlane is known for his guy appeal, and ABC, the network that broadcast the Oscars this year, is known for having the most heavily female audience on TV. Unfortunately, this wound up coming off as pandering, with the network desperately trying to load the show up with what they consider “guy” stuff like breast jokes and Star Trek. And what was supposed to be their biggest coup, a reunion of all six James Bonds, fell through when one or two of the Bonds refused to do it (and I don’t mean Lazenby). It might be that the desperation to attract men to ABC accounts for some of the mean-spiritedness of the evening, apart from the famous Family Guy tendency toward that type of joke.

But back to that opening, the one that made a lot of us long for Rob Lowe and Snow White and Allan Carr. The problems most people seem to agree on were that it was too long, it began too abruptly, and that smirking a bit about your material being bad and tasteless does not actually make it any less bad and tasteless. (Besides which, “We Saw Your Boobs” isn’t even edgy, it’s just another crummy Huffington Post headline.) But the overall conceptual problem was that it was all about him. It makes sense for us media types to speculate on how Seth MacFarlane will do as the host. But as media types also noted, the average viewer doesn’t even know Seth MacFarlane as more than a disembodied voice. The host’s performance can do a lot to raise or lower the level of the show, but the host isn’t usually the draw for the Academy Awards. The movies are, and the shows that get the best ratings tend to be the ones where the favourite is a big movie like Titanic that a lot of young moviegoers went to see. The successful hosts are often the ones who figure out how to show off while calling attention to the more movies on the slate.

Maybe MacFarlane and the producers and writers were too obsessed with the question of how he’d fare as a performer, or whether he could properly balance his edgy and retro sides (both of which probably terrify TV networks: I picture ABC sending them notes not to get too offensive and not to have too many references to movies before 2002). But the theme of the show was “how is Seth MacFarlane doing?” The opening was mostly about him and whether his jokes were too tasteless or edgy. First of all, a lot of those jokes just made him sound like the new Bob Hope, which is no surprise since nearly all Oscar hosts wind up sounding like Bob Hope whether they try to be “mainstream” or “edgy.” (After all, boob jokes were a longtime Hope specialty.) But apart from that, it focused attention away from the movies and the stars, and drew all the attention to this guy most of the home audience wasn’t even familiar with. This was his opportunity to introduce himself to a huge audience, but it seemed to be predicated on the idea that we already knew who he was and were dying to see how he’d make out.

So unless this is an Identity Thief situation where the reviews and the public reaction are wildly out of sync, This night might not wind up helping MacFarlane’s rise to stardom the way he wanted it to. If the ratings aren’t too bad – and since the movies this year are more popular than they have been in some of the previous years – he might emerge looking OK, but it’s certainly not going to change the perception of him as a smug performer. He’s improved so little between Saturday Night Live and this that it suggests he couldn’t or wouldn’t work to improve his live performance skills.

But then the sense of smugness was all over the Oscars tonight. Every Oscar show disappoints for different reasons (let’s face it, the disappointing shows far outweigh the pleasantly surprising ones), but the particular problems of this one were symbolized for me by the way the producers, Zadan and Meron, went out of their way to plug their movie version of Chicago. First they had a re-creation of a number from that movie. Then they had a presentation that paid tribute to the fact that it’s the 10th anniversary of Chicago winning Best Picture. They somehow managed to turn a tribute to film musicals into a tribute to themselves and their foresight in helping to revive the film musical. Even if Chicago were now considered the greatest Best Picture winner of all time, it would still come off as smug. They are, in other words, very much the same guys who produce Smash. The whole show had that same air of assuming we’ll think they’re wonderful and that they don’t need to do much to prove it. Certainly for a producing team that was hired for their showmanship and connections to the world of musical theatre, the show seemed short on the glamour and production values that other producers have brought to it.

There’ll be more about the show and the awards later, but near the end of a long, long night, there was a certain pleasure in seeing Quentin Tarantino’s short, egomaniacal speech. On a night of self-promotion, he was the biggest self-promoter and self-regarder of all, and in a strange way you almost had to admire him for pulling that off. Or maybe it’s just that we sort of know deep down that he’s right: it is all about him.