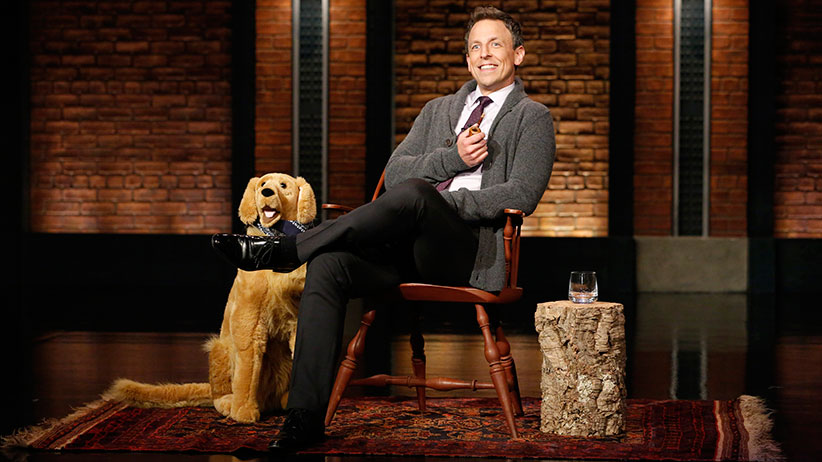 LATE NIGHT WITH SETH MEYERS — Episode 521 — Pictured: Host Seth Meyers during “Back In My Day” sketch on May 2, 2017 — (Lloyd Bishop/NBC/Getty Images)

Along with the likes of John Oliver, Bill Maher, and Stephen Colbert, the 43-year-old Seth Meyers is leading political comedy’s lively, surging pack. Late Night with Seth Meyers runs weeknights on NBC has earned plaudits for its former Saturday Night Live head-writer host, with Vanity Fair even calling him an heir to Jon Stewart. He is—as anyone who’s seen Late Night and his excellent Documentary Now! parody docs like Globesman and Juan Likes Rice and Chicken knows—seriously funny, and seriously smart.

Meyers’s reliable A Closer Look feature scored on the Canadian front recently, as Donald Trump threatened Canadian softwood lumber with a big tariff, while musing about pulling out of NAFTA, all around the 100-day mark of his presidency. “There have been a lot of polls lately suggesting Americans aren’t exactly thrilled with Trump’s performance so far,” Meyers opened in that segment. “I get the feeling this isn’t the first time Trump has had to pull out because of some softwood.”

Q: Trump’s got beef with Canada! You had that very funny segment on “softwood lumber tariffs”—a segment that felt very Monty Python, which you’ve said before is a formative influence on you.

Q: Your interview with George Saunders as guest host of the Charlie Rose Show was stimulating. Saunders told me that the Republicans’ proposed gutting of the National Endowment for the Arts is an urgent symbol of their ridiculous notion of the need for a businessman as president.

A: Yeah. George Saunders is so lovely, and it would be so heart-breaking if George Saunders wasn’t lovely. If it turned out in real life he was this bitter, awful man, it would colour all of the beautiful writing he had done over the years. So that was a great takeaway.

Q: Yes, his belief in empathy is powerful when one interviews him.

A: Yeah, and I thought that was what was so wonderful about his New Yorker piece on covering Trump. He writes with empathy on all things and that was no exception.

Q: Saunders added that he feels America is on the cusp of being the best, most progressive country it’s ever been; he sees Trumpism as this last-ditch throwback. There is a lot to be down about currently. But there are some positive things: over at Fox News, as a topical example, guys like Roger Ailes and Bill O’Reilly are being shown the door, suggesting that some gross behaviour that was acceptable or tolerated in the past is no longer.

A: I’m happy to see that. But, of course, none of the effectiveness of Fox was because people like Roger Ailes or people like Bill O’Reilly were also groping women. That was just what they were doing. That had nothing to do with the effectiveness of Fox News. So Fox News doesn’t really suffer by getting rid of people who can’t live by basic rules of decency. Not to be pessimistic, but I think they will just be exactly as effective by being smarter about the kinds of people they hire.

So I think the more optimistic thing is, obviously, you have a real engagement with people right now who are resisting a lot of the steps that the current administration is taking. I think the question is: can you take that resistance? Can you take the sort of people who will show up in droves for marches? Can you make a difference to the ballot box? I think that’ll be the most interesting thing to see in two years and in four.

Q: How are Amsterdam and Albuquerque influences on you?

A: Well, Albuquerque is just where my wife’s from, so I’ve only learned to look for strong-willed women there [laughs]. Amsterdam was great for me. I got offered a job to go do improv comedy in Amsterdam and my reaction to it was: “Yeah, why not?” [Laughs] I’m waiting tables, couldn’t be less interesting than that.

I left the States; I left the country for the first time in my life. I got a passport because I got hired to work at a comedy theatre in Amsterdam and I got to spend two years performing for a mostly international audience. There were some Americans there, but more often than not you had an audience of Dutch people. It was nice to have to do comedy for an audience that had a slightly different world view than you, different perspective on how things work. In a weird way, you then learn a lot from them, more so than you would I think just doing comedy for the kind of people you grew up with. Even today, when I meet people who are about to go live abroad, I’m jealous because it’s an experience everybody should have.

Q: You and I both have parents who are great, overworked public-school teachers. What do you think when often-wealthy politicians on the right disrespect teachers?

A: I feel as though anytime you can blame societal problems on a group of people, particularly a group of people who aren’t likely to vote for you, it’s going to be something that you will do quickly and easily, dismissing the ethical concerns with something like that. I’ve always been frustrated by the fact that the problems of public schools are blamed on teachers who are often working in really bad conditions and often dealing with students who have a home life that makes learning really hard for them. With that said, I think it’s important to state there are bad teachers. As always, in all walks of life.

A: Yeah, and I think good teachers probably dislike bad teachers more than anyone else. But I think when you use that big brush, and you paint teachers as the problem, that’s not a way to go about it. And I would say, I feel like it speaks to the country to a degree and how it is split, which is Republicans would say that teachers are a problem but would never admit there’s a problem with police. Sometimes that can go in the opposite direction. I think police are essential to society in the same way public school teachers are essential to society. But I don’t think by saying that I’m saying that there aren’t ways in which to make them better.

Q: Is there anything that might surprise people about you?

A: [Laughs] I don’t know. It’s very hard because there’s nothing about me that’s surprising because I’m very familiar with myself, so I would have to put myself in other people’s heads as far as what their expectation is of me.