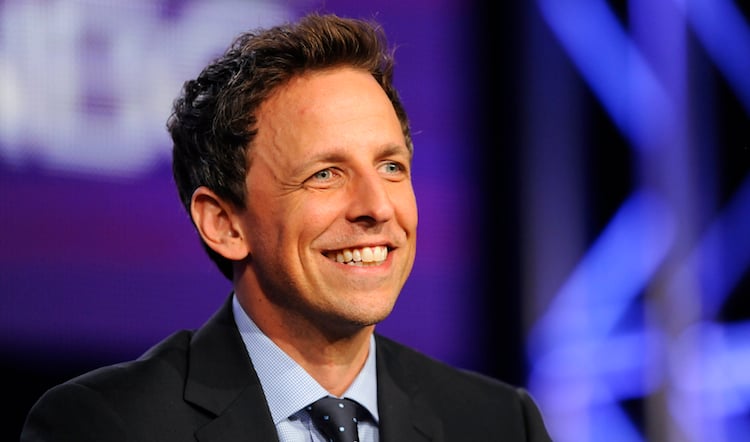 As a sort of postscript to my recent column about talk shows… Am I the only one who was disappointed with, almost to the point of being alarmed at, the first episode of Seth Meyers’ Late Night incarnation? I cannot be alone in feeling that I need Meyers to do well, owing to my limited appetite for the giddy, calculatedly naïve Jimmy Fallon. But Meyers’ premiere seemed, in several respects, undercooked and generic.

Meyers opened with a long version of the classic talk-show host monologue, but did not establish much of a connection with the audience. The one time the camera cut to the crowd, to depict Meyers’ brother, it might as well have been showing a roomful of people on the other coast. And the set is sterile and plastic-looking. This shouldn’t be important, but…the Late Night franchise is, metaphorically, the court of an 18th-century crown prince, a place at which the loyal opposition congregates to play whist and test-drive radical ideas and have a good time on the cheap. The setting ought to be cozy and full of personal touches; ideally, pub-like. It would be a waste for Late Night to wither and become an inferior Hour Two of the Tonight Show.

Meyers came out so understated and dry that it almost seemed as though someone had hit a cosmic mute button. The theme song, performed by Fred Armisen’s band, had a canned power-pop/punk feel, light on the bass. It did not feel as though the octet was performing for anyone. Meyers had pretty much just the one awkward, scripted interaction with Armisen, and as much as I loved the idea of having Armisen as bandleader when I heard about it, I already hate the idea of him being just a bandleader, just a face for camera three to cut to occasionally.

There were no big digital production numbers, no sketches, none of the anarchy characteristic of Jimmy Kimmel’s show. Frankly, one possible effect of Meyers’ debut is to highlight the popular success Kimmel has had at creating a complete comic world slightly off to the side of the mainstream (and on the fringes of the Late Night Talk Wars). Kimmel has famously been tamed since he kicked off his run having his guests drink booze on the set—although I’m a little ashamed to mention that, since Kimmel’s probably tired of hearing about it 2,000 shows later, and it wasn’t bad television. But he still likes elaborate, semi-cruel pranks, preferably ones with the television industry as the implicit target, and he keeps his (secretly brilliant) cousin Sal Iacono and a few other ne’er-do-wells around to serve as unpredictable, antic alter egos.

Meanwhile Meyers is giving us laborious internet humour about Venn diagrams. Things obviously got a lot peppier when America’s sweetheart Amy Poehler showed up with the Vice-President in tow. (So it’s simple. Just have Poehler on every night.) And Lord knows talk shows need time—even more than sitcoms and big-cast dramas, which are always said to “need time”, need time.

But this is a discouraging, half-assed start. “Talk shows need time” is not inconsistent with “the first show is the most important”. Especially when the audience for your lead-in show is as large as it’s ever going to be.