With The Tonight Show moving to NYC, the city emerges as victor in an age-old comedy war 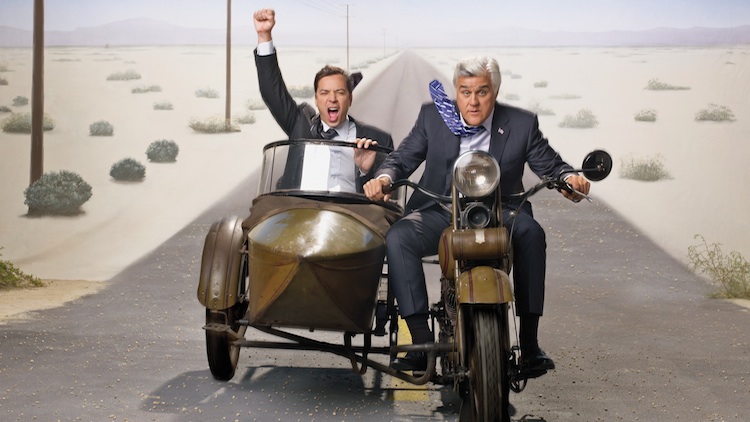 On Feb. 17, Jimmy Fallon will take over as the host of The Tonight Show. But the bigger news may be that a whole new city is taking over the world’s most famous late-night talk show. After more than 40 years broadcasting from Los Angeles, the show is moving to New York, thanks to Fallon and his producer, Lorne Michaels. Less than five years ago, Conan O’Brien reluctantly left New York and moved to a studio in L.A. to take over The Tonight Show, albeit for a short run that ended with him returning the host’s chair to Jay Leno. Now that Leno has been pushed out by NBC for the second time, Fallon may have chosen to reignite a war of the coasts that’s as old as television itself.

“The L.A. vs. N.Y. thing predated TV and tapped into existing highbrow vs. lowbrow cultural assumptions about New York as a city of culture, and Los Angeles as synonymous with Tinseltown and movies,” says television historian Stephen Bowie, creator of the Classic TV History Blog. But the two cities’ clash of sensibilities has been particularly strong since the early days of television. “The people who worked in television in New York and, to a lesser extent, in Chicago had a very clear sense of themselves as inventing a new medium,” Bowie says. That contrast played out in the types of programming the two coasts produced: New York had live television drama and comedy, written by acclaimed playwrights and performed by Broadway trainees; Los Angeles was where sitcoms, Westerns and mysteries were filmed. New York TV was considered classy, while L.A. shows were looked down on as lowbrow.

Still, when Johnny Carson moved The Tonight Show to Los Angeles in 1972 after it had spent a decade in New York, it seemed to be the final proof that L.A. had won the battle for TV supremacy. “Carson preferred life on the West Coast, and the host has the clout to make that happen,” says Richard Wirth, manager of post-production at the University of Southern California’s school of cinematic arts. And L.A. was where the movie and TV stars lived: A talk show “could mine the wider-ranging talent pool available in the Los Angeles area.”

When O’Brien took over The Tonight Show, one of the conditions was that he had to take advantage of that bigger talent pool and, accordingly, he moved his family and writers to L.A. Which is why Fallon’s move came as a surprise to many people, and was cheered by New York celebrities, who might have a better chance at getting invited on the show now. “It’s huge,” comedian Nate Bargatze, who has opened for Fallon, told the Tampa Bay Times. “It’s going to change everything. I think it’s going to put a lot more focus on New York.”

Of course, the reason for the move may have less to do with putting New York in the spotlight and more to do with corporate synergy. Michaels also produces the New York-based Saturday Night Live and Fallon’s former show, Late Night, which is being taken over by SNL star Seth Meyers. By keeping all three shows in the same city, Michaels can consolidate his control over NBC’s late-night franchises and do more crossovers of guests and crew from one show to another.

But whatever the reason, with the move of The Tonight Show, New York will almost completely dominate the world of late-night comedy: Not only Fallon and Meyers, but Letterman, Jon Stewart and Stephen Colbert all tape their shows there. Aside from O’Brien, who has stayed in California, looking uncomfortable on his TBS show and getting nowhere near the buzz he used to get when he was in New York, the most popular major-network late-night comic working in Los Angeles is Jimmy Kimmel of ABC’s Jimmy Kimmel Live.

That means the sensibility and style of late night is New York’s, and so, overall, is the sensibility of TV comedy. With traditional L.A.-based sitcoms in decline, influential TV comedies include Louis C.K.’s Louie, a celebration of location shooting in New York; entertainment reporter Ray Richmond wrote that C.K. is particularly proud “to have shot in every borough and in parts of the city rarely seen onscreen.” New York likewise gets a starring role in comedian Mindy Kaling’s The Mindy Project (though much of it is actually shot in L.A.).

That kind of celebration of a city has become rare in Los Angeles comedy, particularly in late-night TV, where New York’s brand of humour has been considered a little cooler and hipper. Leno, broadcasting from Burbank, Calif., presented himself as a cheerfully unhip guy with Middle-American appeal, while Letterman, for instance, was edgy, prickly and urban in his style. Bill Carter’s book The War for Late Night even has a sequence where Leno goes to a meeting in New York and completely bombs with his routine, and NBC then-president Jeff Zucker blames it on the city: “Zucker simply thought Jay hated New York, the idea of New York, Dave’s town. Somehow, psychologically, New York had become screwed up for Jay.”

Even O’Brien, a younger and hipper comic than Leno, couldn’t shake the feeling The Tonight Show had of being bloated, old-fashioned and too connected to Hollywood. That could be one reason why Fallon is not only staying in New York, he’s playing up the city Louis C.K.-style in his promos and interviews, filming himself on the streets and telling the New York Times that he likes New York because “it’s exciting in New York. It makes more sense in general.” By moving the show, Fallon may be able to do what O’Brien couldn’t: make it cool.

The trade-off for that extra coolness might be a war for guests. Even with New York-based stars such as C.K. or Tina Fey, or people like Amy Poehler, who film their shows in L.A. but make their homes in New York, sunny California is still ahead in the number of celebrities who choose to live there full-time. Fallon insisted to the Times this would not be an issue: “We’ve had no problems booking our show. I had the President of the United States on.” But the new late-night geography could leave shows competing furiously over whichever star happens to be in New York on a promotional tour: Letterman and Fallon would have to split the big names instead of sharing them between cities the way Letterman and Leno often did.

One person who could benefit from the geographic shift is Kimmel, whose humour is very much based on Los Angeles showbiz-insider comedy, with running gags about Matt Damon and Ben Affleck and features such as “Celebrities Read Mean Tweets.” Deadline.com wrote that Kimmel will “have a huge advantage” on Oscar night, when winners and losers will be able to walk right across town to visit his show. If Fallon is just one of many comics talking about the weather in New York and making local city references, The Tonight Show may blend in with all the other shows; even as L.A. appears to be losing out in the late-night wars, it could triumph simply by having the only late-night show that stands out from the crowd.

Still, even if Kimmel comes out on top, New York will have won its place as the centre of the late-night world—and it might also be an indication that L.A. is no longer the centre of the TV world as a whole. A lot has changed in TV—and in New York, since Carson left the city. New York is now a clean, low-crime place where stars don’t mind living. Meanwhile, L.A. shows signs of losing its grip. More and more production is done elsewhere; other states, not to mention Canadian cities such as Vancouver and Toronto, are sometimes preferred for economic reasons, when it comes to making scripted TV. Two years ago, Deadline.com reported that New York had surpassed Los Angeles in the number of drama pilots shot there; last year, the same site announced that New York was “a comedy-pilot magnet,” thanks to the influence of shows like Louie and Girls.

That leaves L.A. dwellers feeling like the city’s moment could be passing, or at least changing. Wirth, who wrote an essay, “A requiem for NBC Burbank,” lamenting the end of a lot of L.A.-based programming, says the loss to the city of Tonight’s departure “will be about 100 jobs,” but adds that they’re there’s a bigger problem, a “blow to pride and ego.” In 1972, when Carson left, it was New York that suffered that loss of civic pride; now it’s cool for hosts to love the city and dump on its California rival: “When I think of L.A., I think of sunshine and people rollerblading and eating sushi,” Fallon told Carter, explaining why he doesn’t want to work there. Bowie says that, back in the early days of television, many New York executives “became very invested in the idea of NYC as the home, or at least the origin point, of quality TV.” Today, people like Fallon and Michaels may be equally invested in an even bigger goal: making New York the home of TV, period.