ESPN president: 'He was one of the most significant and influential members of the ESPN family ... and he will be sorely missed' 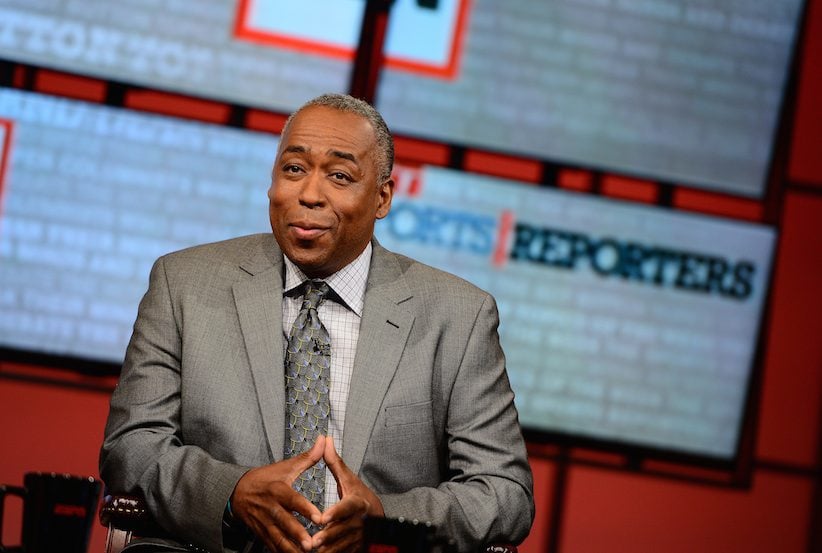 John Saunders on the set of ‘The Sports Reporters.’ (Joe Faraoni/ESPN Images via AP, 2013)

NEW YORK — Canadian-born ESPN sportscaster John Saunders, who has hosted The Sports Reporters for the past 15 years, has died, the network announced Wednesday. He was 61.

The Toronto native, who grew up in Montreal, did play-by-play for the Toronto Raptors from 1995 to 2001 and worked as a sports anchor at several Canadian outlets.

Saunders took over as host of “The Sports Reporters,” a Sunday morning staple of ESPN programming, after Dick Schaap died in 2001. Saunders played the role of calm traffic cop on the panel show that features three sports journalists volleying opinions on the top sports news of the day.

“John was an extraordinary talent and his friendly, informative style has been a warm welcome to sports fans for decades. His wide range of accomplishments across numerous sports and championship events is among the most impressive this industry has ever seen,” ESPN president John Skipper said in a statement.

Saunders was also a founding member of the board of directors for The V Foundation for Cancer Research, a charity started by the network after former college basketball coach and ESPN announcer Jim Valvano died of cancer in 1993.

“He was one of the most significant and influential members of the ESPN family, as a colleague and mentor, and he will be sorely missed,” Skipper said.

No cause of death was given by the network.

A book Saunders co-authored with John U. Bacon on his life and struggles with depression is scheduled for publication by Da Capo Press in April 2017. A summary on Amazon.ca of Playing Hurt: My Journey From Despair To Hope said the book was about “a leading figure in the sports world — the quintessential ‘man’s man’ who seems to have it all — confesses his constant battle with depression and how it nearly cost him his life. John Saunders — stellar athlete and respected sportscaster — welcomes readers into the heart of his desperate struggle against depression.”

Saunders earned a scholarship from Western Michigan University, where he was a hockey defenceman from 1974-76, before transferring to Ryerson in Toronto, where he was an OUAA all-star. His younger brother, Bernie, played 10 NHL games for the Quebec Nordiques from 1979 to 1981.

He lived in Hastings-on-Hudson, N.Y. with his wife, Wanda. They had two daughters, Aleah and Jenna.