The Colbert Report star moves to the Late Show in 2015 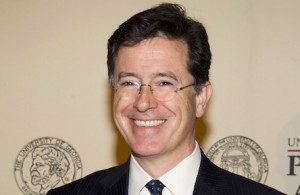 The rumours and speculation were correct. Stephen Colbert will replace David Letterman when the late-night talk-show host retires in 2015.

The new gig gives Colbert the opportunity to move away from his current persona on Comedy Central’s The Colbert Report, where he currently plays a hyper-conservative pundit.

“Stephen Colbert is one of the most inventive and respected forces on television,” CBS chairman and CEO Les Moonves said in a statement. “David Letterman’s legacy and accomplishments are an incredible source of pride for all of us here, and today’s announcement speaks to our commitment of upholding what he established for CBS in late night.”

Having Colbert as host of the Late Show is the latest move in a reorganization of the late-night landscape. Also this year, Jimmy Fallon replaced Jay Leno on The Tonight Show and Seth Meyers moved into Fallon’s spot on NBC’s Late Night.