The late-night innovator steps into the most innovation-resistant format in TV. Jaime Weinman on Stephen Colbert's first Late Show 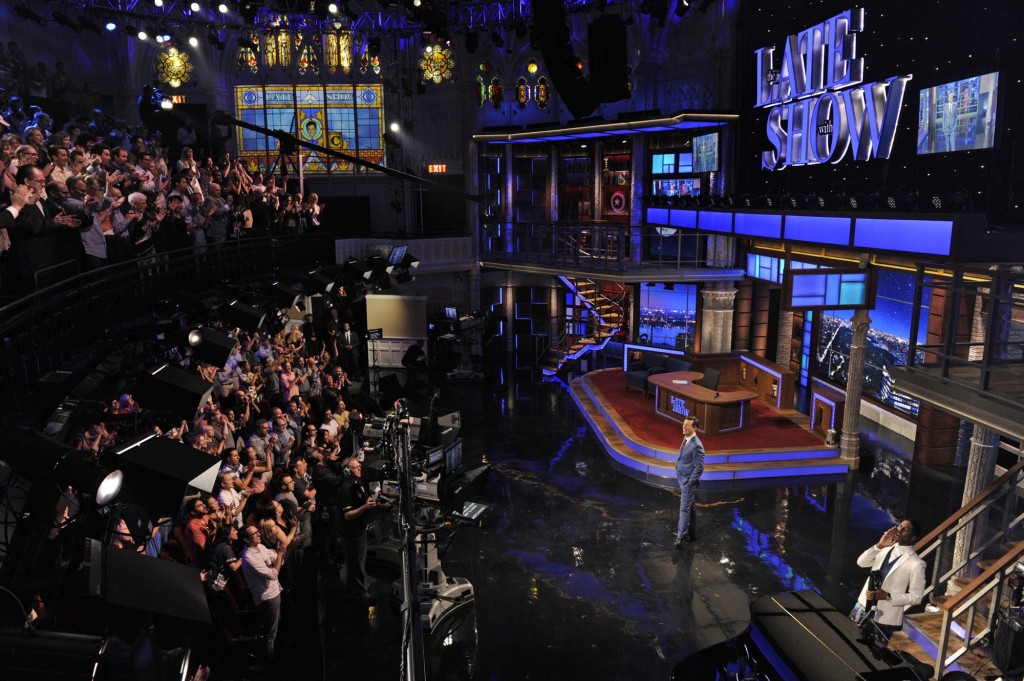 Stephen Colbert hosts the premiere episode of The Late Show on Sept. 8, 2015, in New York (Jeffrey R. Staab/CBS via AP)

For one moment, it seemed as though The Late Show with Stephen Colbert would be doing something revolutionary. There was no announcement of his name at the beginning and, for a moment, it seemed as if he might be breaking a rule of late-night television. The rule is that an announcer must always tell us who we’re going to see and what the name of the show is, even though this is one of those TV conventions that seems to have been unthinkingly carried over from radio, where it was actually necessary. If Colbert had dared to go without the announcement, that would have seemed like what they call a seismic shift in the form.

Of course, he did have the announcement; it just came a few minutes into the show. Instead of an announcer, it was Colbert, using his announcer voice, but the title sequence did have the obligatory name-dropping of the show, the host, and the guests. That’s because the U.S. late-night talk show is a form even more rigid than the James Bond movies: Daniel Craig can get away with moving the gun-barrel opening all the way to the end, but Stephen Colbert can’t go five minutes without the announcement.

This is all just a way of saying what’s been said before: that Colbert is walking into the most ritualistic form in TV, where everyone does more or less what’s been done since the days of Steve Allen. The format is announcement, monologue, comedy bit, first guest, second guest, musical act, and woe unto you if you leave any of those things out. All you can really do is vary them, or mix them up, or put them in slightly different places: Colbert’s first show switched the position of the announcement and kept the monologue short, but they were still there, and may well get more conventional as time goes on. (If you see something unconventional on an hour-long late-night comedy show, you can assume they’ll eventually be dropped, such as the Quinn Martin-style episode titles on Conan.)

The only thing the host can really bring that is different is his own persona, whether it’s Letterman’s cranky outsider or Jay Leno’s barely concealed contempt for regular people. Colbert’s schtick, at the moment, is still close to what he developed on his own show. Even though he’s no longer playing a right-wing pundit, he’s still playing—as he said—”a narcissist,” a parody of show-business people who think everything revolves around them. Virtually everything he said tonight revolved around him; even his Donald Trump jokes were about how he, Stephen Colbert, can’t quit Donald Trump.

This could work, or it could be something that wears thin and has to be abandoned in favour of something more normal; I don’t pretend to know after only one show. But it does have potential to set him apart from the others working this particular beat. All topical jokes are pretty much identical to one another; nobody’s Trump joke is particularly brilliant, and many of the hosts could trade jokes without anyone noticing. We don’t watch for the jokes, we watch for the attitude, and Colbert could offer an attitude—and a sense of character development, in contrast to the rather impersonal Jimmy Fallon—that holds our attention. But it’s too soon to tell, as I said; he didn’t seem to have a problem abandoning part of his Colbert Report persona, but he still seemed less than completely sure of himself. It’s entirely possible that even fake narcissism will be a turn-off to the broadcast audience, and he’ll have to throw in some more obvious self-deprecation. This is not the place for subtlety. 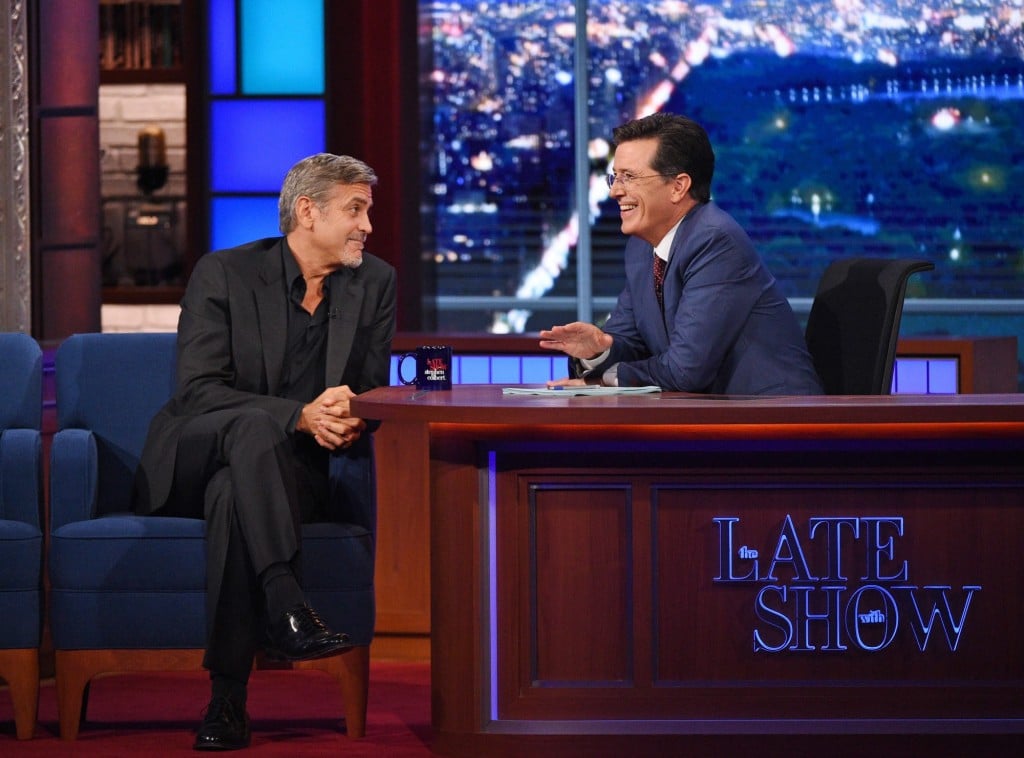 Stephen Colbert, right, talks with actor George Clooney during the premiere episode of The Late Show on Sept. 8, 2015, in New York. Clooney and Republican presidential candidate Jeb Bush were the guests for Colbert’s debut. (Jeffrey R. Staab/CBS via AP)

Everyone knew, going in, that this format would be a limitation on Colbert. But it’s still understandable that he wanted to leave his innovative cable show and take his act to a more conventional hour-long show. What the rigid format gives the host is a sense of authority rooted in tradition. The hosts of newscasts, another very old-fashioned format, also have that kind of authority: People pay attention to what they have to say. On cable, hosting a spinoff of Jon Stewart’s Daily Show, Colbert was really an outsider to the cultural conversation; he couldn’t reach a very large or demographically broad audience and, because of the unusual format, he could never talk with a guest as himself.

Part of Colbert’s objective in doing this new show is the chance to drop the mask occasionally and talk seriously with people. He tried it tonight with Jeb Bush, though I think he suffered from his lack of experience as a “serious” interviewer; the trick is not to let a candidate turn his talk-show appearance into a commercial, and I think Colbert let Bush do his campaign spiel too much. (Colbert seemed to reveal a Jon Stewart-style yearning for centrist, non-vicious politics here, and it felt awkward.)

But mostly it’s the format and the network that give him the gravitas (to use a word he made fun of on an early Colbert Report). Being on a 22-year-old show on one of America’s oldest broadcast networks, he can be part of the broader conversation. I think the opening sequence, where he visited various tourist destinations and hangouts of “Middle America” (the bowling alley, the factory) is a hint at why he wants to be on CBS. On CBS, he can get beyond the young, relatively homogenous audience of cable, and reach the types of people who might consider voting for Jeb Bush or watching The Mentalist.

The Donald Trump segment, naturally the most effective part of the show (the extended bit about the cursed amulet seemed like something that was funnier in rehearsal), may indicate what he’s going for. It’s attempting to be just a little bit above the usual late-night coverage of Trump. Most shows just treat him as a godsend and an irresistible source of material, and that’s how Colbert treats him, too. But he also tried to make the point that it’s humiliating, and probably wrong, for the media to give Trump this kind of attention. If Colbert is successful, he’ll elevate the material and the format just a little bit, just enough to reach a few people he might not otherwise have reached. If he’s not, well, he’ll lose the politically minded viewers to cable, and the escapist viewers to Fallon. It’ll be interesting to see if he can get the balance right, challenge viewers just enough and no more. Knowing just how far you can take an audience is the key to success on broadcast television.

Colbert suffered a bit from a rather underwhelming guest lineup for a first show. Clooney is a good guest, but he’s not particularly big box office as a movie star if the film doesn’t have the word “Ocean’s” in it; for a CBS audience, he’s that guy from the movies you didn’t go to see, and a more populist star would have done more to ease Colbert into this new world. Jeb Bush is just a guy who’s incapable of exciting anyone. Colbert seems to want to have one showbiz guest and one “serious” guest most nights, but this particular lineup didn’t do much to sell it as a great combination, especially since Colbert didn’t get Trump (Fallon did).

So there we are: It could have been a better first episode, and we don’t know yet how much—or in what direction—Colbert will have to adjust his act. But he’s a gifted performer who clearly wants to become that rare thing in this age: a broadcaster, someone who can entertain and “raise the bar” of television just a little bit. Can he do it? Ask me again in a few months. The one thing I will bet on now: The announcement of the title and the guests will wind up coming in the same place every night. Maybe not right away, but soon. There are some things you don’t mess with in the late-night format.