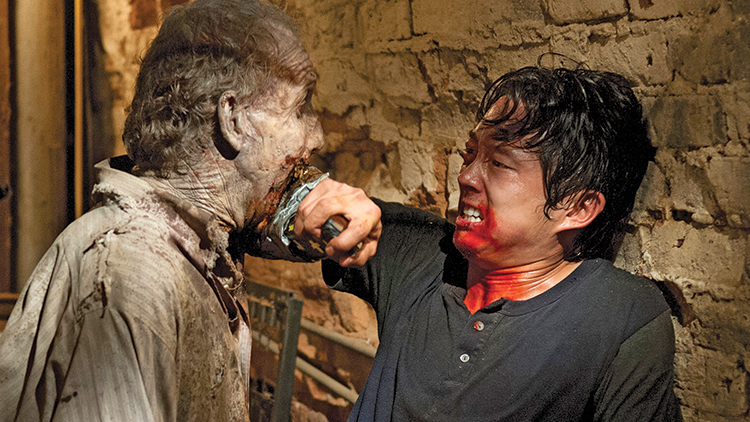 When film mogul Harvey Weinstein recently came out against violence in the movies, it was treated by the press as a revolutionary statement. But even though Weinstein talked about choosing to make films “that aren’t violent, or as violent as they used to be,” there isn’t much blood at the multiplex today—not compared to traditional ad-sponsored television. Hannibal, which returns for a second season on Feb. 27, is a prime-time adaptation of Thomas Harris’s gruesome Hannibal Lecter novels that features cannibalism, torture and copious amounts of viscera–and it’s not even the goriest show on commercial TV. If you want family-friendly content, you go to the movies; if you want gore, turn on the TV.

TV has been testing the limits of the amount of violence it can show for more than a decade, ever since CSI introduced the concept of graphic autopsies. But, unlike sex—with nudity still avoided on broadcast and basic cable—crime and horror is more explicit than ever before, thanks to technology. “TV producers can go far beyond just showing a gun discharging and a victim lying on the sidewalk,” laments Melissa Henson, director of grassroots advocacy and education for the Parents Television Council, a U.S. group famous for its campaigns against explicit TV content. “They are now able to show the bullet impact the body, the blood spurting out, the bullet tearing through muscle and bone and tissue. None of this was possible before.”

Meanwhile, though Weinstein has said he’s tired of making “crazy action movies just to blow up people and exploit people,” mainstream movies are less violent than they’ve been in some time. With studios increasingly dependent on younger audiences, big-screen content is often toned down for those who might have trouble getting into R-rated movies: 1987’s Robocop was just remade with softer violence as a PG-13 film.

On cable, the most popular show is AMC’s The Walking Dead, which is as gory as the zombie movies to which it pays tribute. And broadcast TV, traditionally more censored, is catching up with cable. Fox’s Kevin Bacon crime drama The Following, now in its second season, features eye-gougings and people set on fire. TV executive Robert Greenblatt, who greenlit Dexter on the cable network Showtime, noted last year that CBS’s Criminal Minds is “worse than Dexter ever was,” in terms of violence, and Hannibal showrunner Bryan Fuller told Empire magazine that his show would be “a hard R” if it were a movie.

But unlike past eras of TV, there’s been little outcry from anyone over the carnage. In the 1970s, violence on television was all over the news, and led the U.S. Federal Communications Commission (FCC) to impose a “family hour” of violence-free viewing—even though TV violence in that period was bloodless. Broadcast networks still can’t say certain words or show nudity, but CSI never got in trouble for showing Justin Bieber getting shot full of holes.

This may be because TV watchdogs aren’t equipped for campaigns against violence. Henson says the Parents Television Council, the leading source of complaints in the U.S. about sex and language on TV, has its hands tied when it comes to violence, because the FCC can’t fine networks over it: “Indecency findings are limited to sexual or excretory functions, so a complaint about a scene of extreme violence wouldn’t get very far.” In the U.S., blood is not considered “indecent,” so networks push the envelope without fear of reprisal.

It might also be that viewers simply don’t worry much about violence compared to nudity. In Canada, broadcasters have standards that prohibit “gratuitous violence,” but City, the Canadian broadcaster of Hannibal, has received few complaints about the show’s content. The surreal, poetic violence on a show like Hannibal clearly has an artistic purpose and, unlike Janet Jackson’s nipple, dead bodies don’t seem to bother modern viewers, as long as there’s a reason for them. That indifference makes this a golden age of TV for producers who want to explore the meaning of violence, no matter what channel they’re on: “You can’t do nudity and you can’t say f–k,” Fuller said, “but you can do everything else that you want to do.”