The Amazing Race Canada: The show gets underway 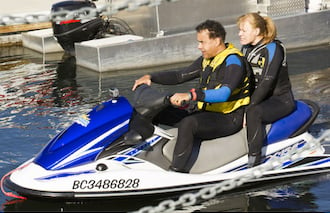 The following sequence unfolds each and every time a Canadian broadcaster announces it will reproduce an American reality TV series: there’s buzz and build-up and vows to submit an application, followed by lameness and let-down and a national handwringing.

However. This time, there’s something new. Something never before seen in Canada or the U.S. It’s Hal Johnson, driving a jet ski full-throttle across Okanagan Lake, screaming, “Woooohoooo!” There is no American equivalent to the Body Break stars. CTV’s much-hyped The Amazing Race Canada premiered on Monday night, with several factors working against it. First: Canada consistently fails at the seemingly simple task of creating sensational reality television. Without any Kardashians to guide us, we just have a lot of room to grow, unplanned pregnancy–wise.

Second: CTV’s format restricts its version of the competition to within Canada’s borders. What has made the long-running Amazing Race franchise so addicting, so nail-biting, is the thrill of contestants flying to far-flung lands and the stress of them encountering cultural and linguistic barriers when they get there. The Amazing Race Canada, by contrast, will be set entirely in a country governed by Stephen Harper. In case it still isn’t clear how boring this makes things: the premiere episode was split between Niagara Falls, Ont., and Kelowna, B.C. The first challenge took place at the Niagara Butterfly Conservatory, which features “more than 2,000 exotic butterflies.” That’s exactly the kind of place you can skip when you have a passport and/or an American network’s budget.

As the nine teams drive their sedans towards that first challenge in a perfect line, no one so much as passing, you’ll wonder why you’re paying for cable at all.

Your reward comes when Joanne McLeod leaps off a narrow plank in the woods and calls out, “Until next time, keep fit and have fun!”

Hands down, CTV’s best decision was casting “married fitness icons” Hal Johnson and Joanne McLeod on the show. Even the other contestants think so. While waiting around at Toronto’s Pearson airport, one of the other racers informs the duo, “My cousin has been you for Halloween many, many a year.”

The show actually suits the couple, too. The Amazing Race is much different from the type of reality TV that distresses your mom. Bob Barker could host this thing. It’s an actual competition, largely physical, that keeps contestants on the move every episode. When night falls, the cameras turn off and the contestants go to bed. There are no hot tub scenes. Not a bar fight to speak of.

Perhaps the other teams will come into their own. For now, it’s enough to know that the diverse casting choices include a pair of hippies from B.C. and a pair of cowboys from Alberta. (Mysteriously, there is no team from Atlantic Canada—perhaps they were all out fishing.)

Joanne wondered aloud to the cameras on Monday night’s episode if being Body Break stars would put a target on their backs. If Canadians can be that mean, it hasn’t surfaced yet—by the end of this first leg of the race, Hal and Joanne finished a proud third, having already agreed to an alliance with the other top teams.

Americans have their Kardashians. But they will never know what it means to watch Hal and Joanne cross that finish line together, reaffirming everything we learned in childhood. Those two can do anything. And so can you.