'The Crown' on Netflix is riveting. And not completely true.

Netflix unleashes a lavish 10-part series on the Queen. Our royal watcher separates fact from fiction.

Queen Elizabeth II is the most photographed woman in the world. Yet even after nine decades of constant scrutiny, she is enigmatic, even mysterious. Today’s popular image of the monarch as a reserved, dutiful sovereign is formed, in part, through the award-winning creations of writer Peter Morgan: The Queen, a movie about her reaction to Diana’s death, as well as the hit play The Audience, about Elizabeth’s relationships with her prime ministers.

Now Morgan’s fascination with the Queen and her role has reached its apex: a monumental TV series, The Crown, focuses on Elizabeth, her family and the 13 prime ministers (to date) who have served during her reign. Netflix has reportedly sunk US$100 million into the 10-part first season, available Nov. 4. It is a lavish, lush and remarkably perceptive peek behind palace walls. “We all imagine it’s a fairy tale but it’s anything but,” Morgan told TV critics in July. The royal family enjoys stupendous grandeur and luxury, but also endures harsh rules, pressures and expectations.

As the series reveals, Elizabeth II may be a young, glamorous hope for postwar Britain, but she must also be politically and socially neutral. “People will always want you to smile, or agree or frown. The minute you do, you will have declared a position, a point of view. And that is the one thing as sovereign that you are not entitled to do,” Elizabeth’s grandmother, Queen Mary warns in The Crown. “To do nothing is the hardest job of all, and it will take every ounce of energy you have. To be impartial is not natural, not human.” 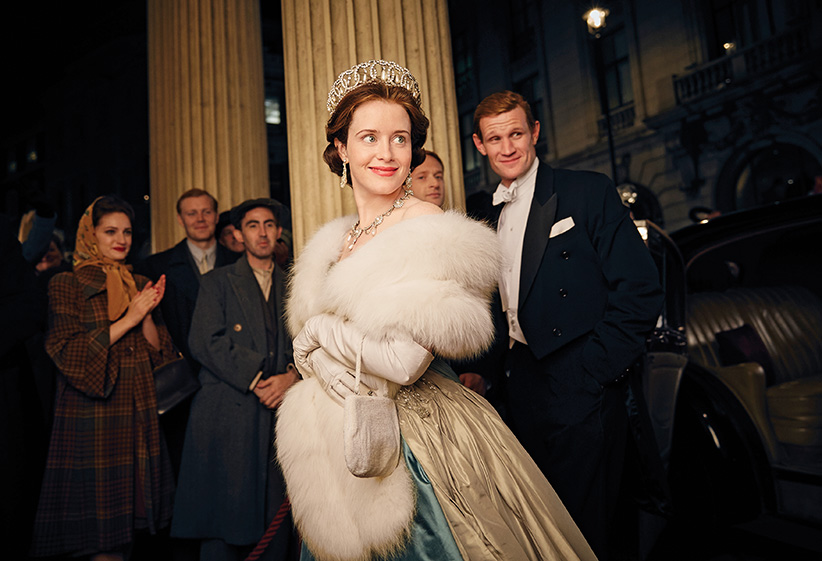 Claire Foy, centre, and Matt Smith are in a still image from The Crown. (Robert Viglasky/Netflix)

As the human embodiment of the state, Elizabeth is constantly reminded that duty must always come first, even at the cost of pain to herself and her family. In the series as well as real life, her husband struggles in his new, undefined role as prince consort. “You’ve taken my career me from me, you’ve taken my home, you’ve taken my name,” explodes Philip, after being told by Elizabeth that their children will bear the Windsor surname, not his, Mountbatten, and they have to leave comfortable Clarence House for Buckingham Palace. “I thought we were in this together.”

The main events are no secret to history buffs, but they will be unknown to the vast majority of viewers. Unlike many so-called documentaries that are little more than rehashed tittle tattle and gossip, The Crown’s fact-heavy fiction puts dramatic meat on much more substantial and accurate bones. Small details add to the air of authenticity: media photographers who refrain from taking pictures of the grieving 25-year-old Queen as she leaves Kenya after her father dies; the machinations of the monarch’s private secretary, Tommy Lascelles; her voice, higher and more clipped than it is now; even her affection for two-strand pearl necklaces.

However, real events don’t slot neatly into 10 episodes. Some are conflated for greater emotional impact. In the series, a grieving Queen Mother flees the 1953 London unveiling of a statue of her husband for northern Scotland. In fact, the statue was installed in 1955, and that Scottish trip occurred in 1952.

Other events have been ignored, or invented, to add needed tension. In The Crown, Philip is portrayed as a foreign outsider—from a “family of parvenues and carpetbaggers,” Mary sniffs—rather than a distant relation whose mother and grandmother were born in Windsor Castle. He’s seen resisting having to pledge allegiance to Elizabeth at her coronation, something not hinted at by biographers. Royal historian Hugo Vickers blasted in the Daily Mail, “It is marred by a series of sensationalist errors and some quite remarkable lapses into vulgarity, including historically inaccurate scenes of confrontation.”

The royal family’s reaction to Morgan’s largely sympathetic creation is anyone’s guess. After Helen Mirren won an Oscar for her portrayal of Elizabeth II in The Queen, its creators were reportedly told by couriers that while details were wrong, the story was essentially accurate. The Crown casts daylight upon the magic of the monarchy. Left unanswered is: where does fact stop and fiction start?