The moments, misspeaks and make-outs that everyone's talking about from TV's big night

It may have been a Monday evening, but television’s big night was just as glitzy as ever, powered by the rakish Hollywood charm of True Detective‘s lead duo of Matthew McConaughey and Woody Harrelson, and further buoyed by a partisan crowd for Orange Is The New Black, House of Cards, and Breaking Bad (only one of those sets of fans would go home happy–and how). Here are the five buzziest talking points from the show that was: 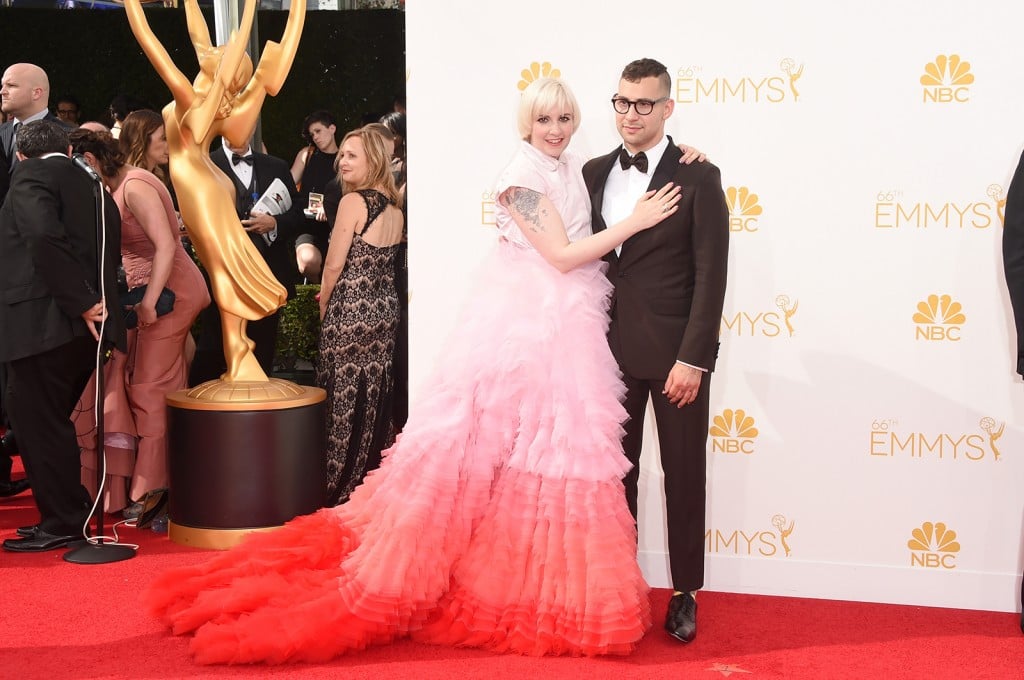 Assessing the red carpet is the favoured pastime for most at these award shows, and for the most part, it was good. The trend? Fresh reds, worn to the hilt by Uzo Aduba in an elegant strapless, Julia Louis-Dreyfus in a rich ruby number, and by Kaley Cuoco-Sweeting with her raspberry-sorbet ballgown, and popping colours, like Kerry Washington’s orange number. Of course, fans of classy simplicity this year had plenty to ogle at: Taylor Schilling opted against the pop-colour orange of her typical fare in her dark jailhouse comedy Orange Is The New Black by wearing a beaded nude gown. Taking the colour trend perhaps too far, though, was Lena Dunham–owning her new platinum bob with aplomb, but perhaps going too far with a dress that looked like an burst and bleeding flamingo. 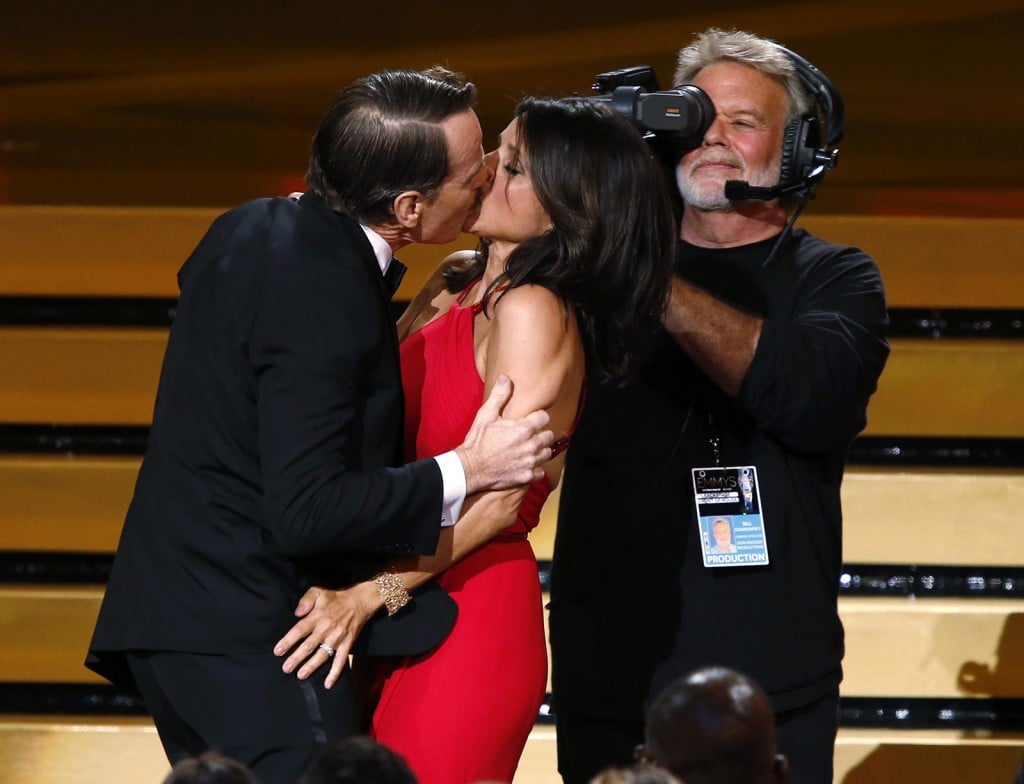 Actor Bryan Cranston engages Julia Louis-Dreyfus in a prolonged kiss as she takes the stage to accept the award for for Outstanding Lead Actress In A Comedy Series for her role in HBO’s “Veep” onstage during the 66th Primetime Emmy Awards. (Mario Anzuoni/Reuters)

It began with a funny onstage bit: Louis-Dreyfus and Cranston introducing an award, with Louis-Dreyfus taking a minute to mention how much Cranston looked like Seinfeld dentist Tim Whatley (once played by Cranston). So when Louis-Dreyfus won her second consecutive (and well-earned) award for best lead actress in a comedy for her star turn in Veep, Cranston intercepted her, giving her a long, heavy kiss that ran over the announcer listing Louis-Dreyfus’s lengthy credits. “Yeah, he was on Seinfeld,” she said, ravished on stage, as Cranston wiped his lips coyly. A fairly perfect moment, early on. 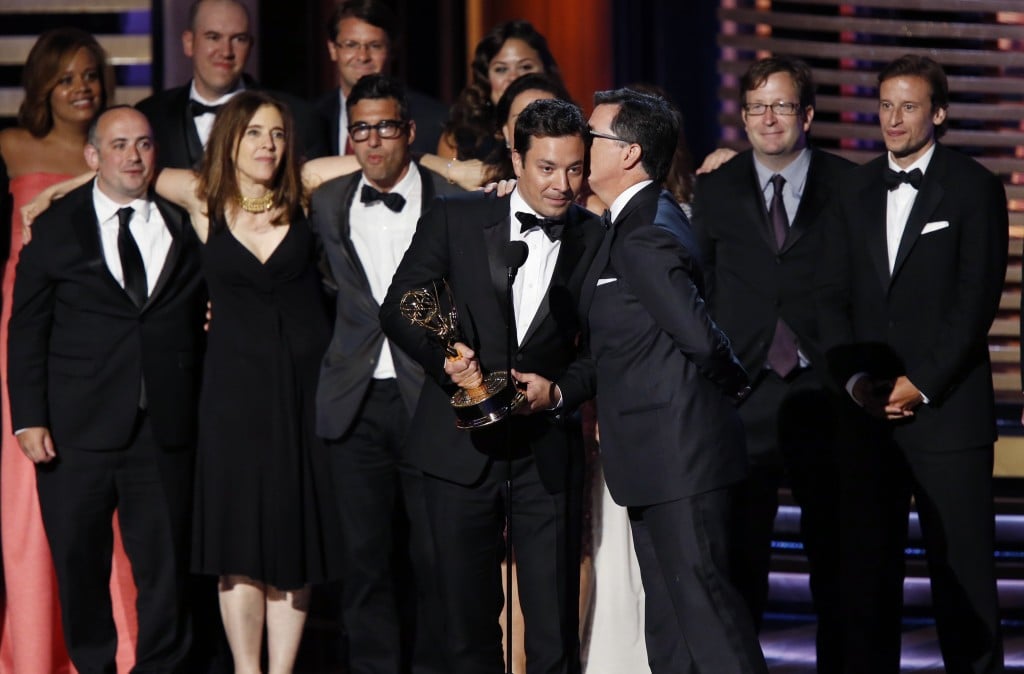 It’s fairly standard for award-winners to claim that they didn’t expect the victory, but it’s pretty easy to see through (a halting Cary Fukunaga, insisting repeatedly that his award for directing True Detective was “awesome”—we believe you; the large staff and crew of The Amazing Race massing too-quickly on stage with a terse “I can assure you we didn’t expect this at all” by the showrunner—less so). But it certainly took Modern Family director Gail Mancuso by surprise—when she won, she very clearly mouthed a curse word, perhaps terrified of the speech she had not written. Jimmy Fallon, too, eluded the censors with an unbleeped “bulls–t” while Stephen Colbert whispered his speech into his ear. For a show that continues to aspire to the venerability of its big-brother Oscars—it advertised this year the “longest red carpet ever,” which feels like more a triumph in textiles and rulers than in remarkable pageantry—it’s nice to see a touch of the human. 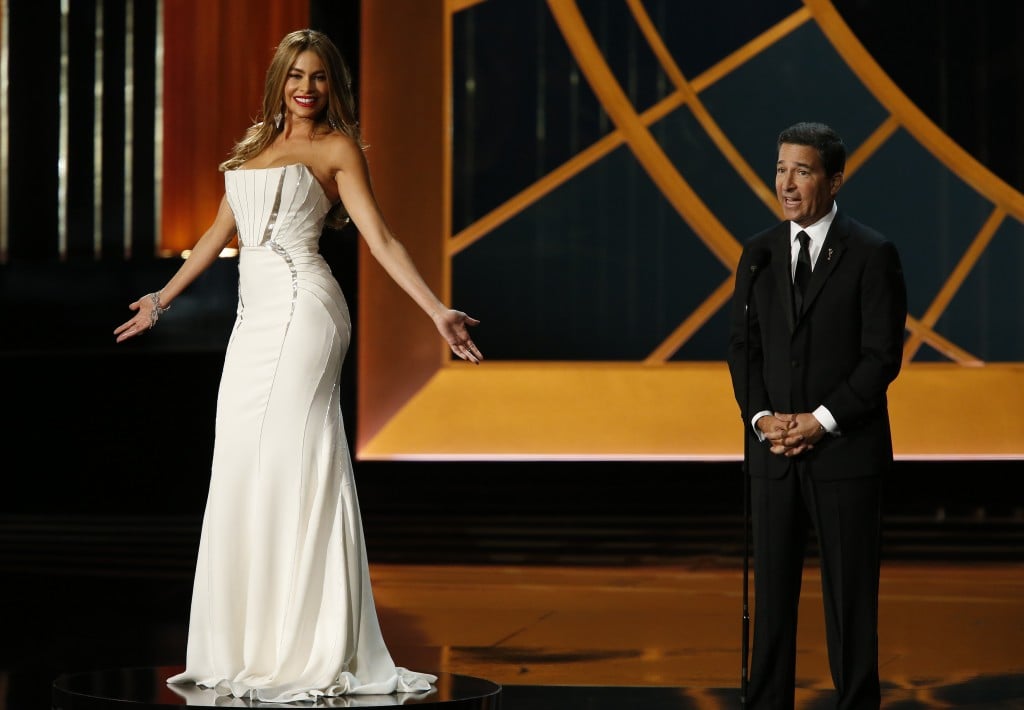 Sofia Vergara and the male gaze

How curious it is that the MTV Video Music Awards—the maligned show aimed at teens and largely premised on pop divas shaking their butts as the elderly shake their heads—upstaged the venerable Emmys in one key way: not offending women. One night after Beyoncé stood powerfully in front of a massive screen emblazoned with the word “feminist,” Academy CEO Bruce Rosenblum spoke as actress Sofia Vergara literally twirled onstage on a rotating platform. It was awkward and disappointing, to say the least, especially considering Vergara’s pedigree—four Emmy nominations for her work on Modern Family, which had a banner night—which didn’t matter when it came to the Academy’s objectifying. “What a wonderful time for women on television,” said Julianna Margulies in her speech after winning the award for best lead actress in a drama. Guess she wasn’t around for the Vergara bit. 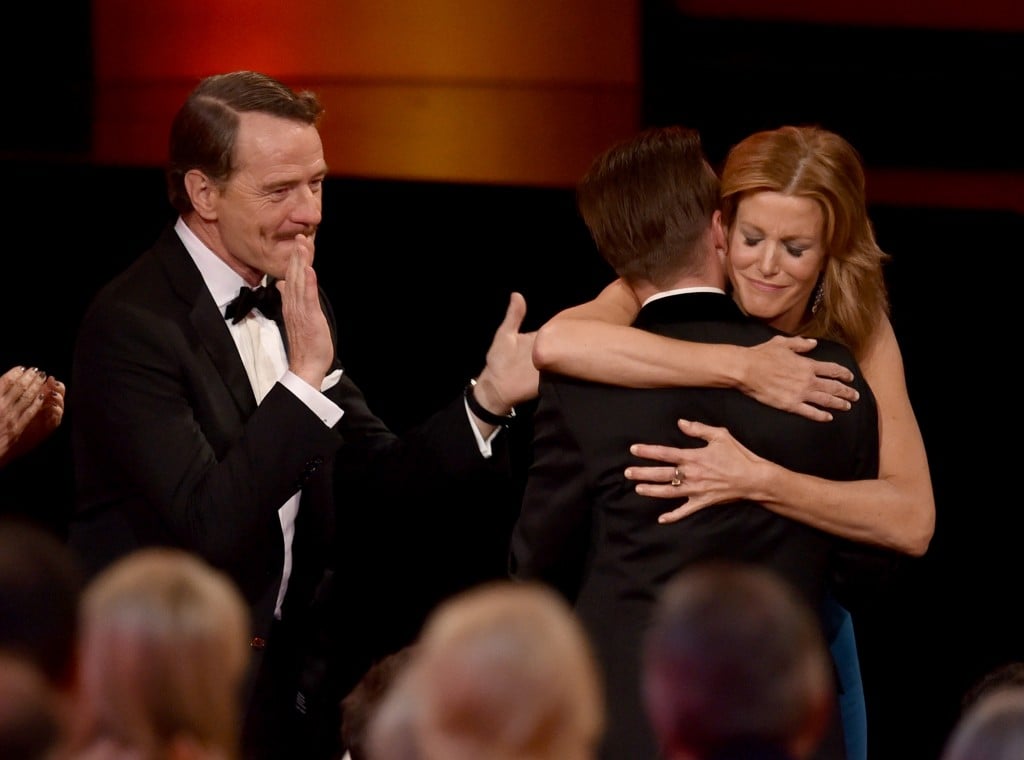 There was the award for drama writing (in a category where Breaking Bad comprised a third of the nominees), by Canadian-born Moira Walley-Beckett, where she described writing for the cast as “pure joy.” There was the immensely charming Aaron Paul’s lovely ode to Bryan Cranston when Paul won best supporting actor in a drama: “There’s not a single day that I don’t miss running to work to work opposite you.” Anna Gunn won her second consecutive Emmy for best supporting actress in a drama, where she called Cranston “the absolute best person.” There was then, of course, the win for Bryan Cranston, his third Emmy for his portrayal of Walter White, who talked about his tendency to look for the easy way out in life as a kid—and how no one should follow in his footsteps. And to top it off, Vince Gilligan’s show earning the best drama crown. It was in some ways sad to say goodbye to them again, but it was a well-deserved (and perhaps expected) love-in for a series that did so much to make TV (and the Emmys) vital again.