The end of Archie? Not so fast 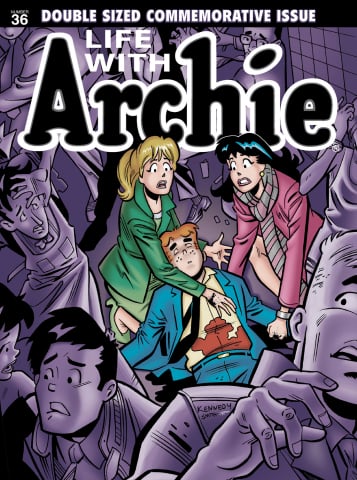 You may have heard that Archie will be killed off in Archie Comics. As a self-proclaimed Archie expert (one of the last such creatures in captivity), I have been asked what I think about this development, and I always answer: Read the rest of the story, beyond the headlines. Because what you’ll see is that the news is much less spectacular than it seems. Archie, America’s typical teenage goofball, is not being killed off, not even temporarily. The scene everyone’s talking about, where Archie is shot protecting Riverdale’s resident gay guy Kevin Keller, takes place in “Life With Archie,” a comic about two possible futures for Archie and the gang as grown-ups. In other words, Archie is only dying in one of two alternate-universe futures; it’s really a “what if Archie died?” story.

So the point of publicizing this story was to make it seem as if there was a permanent status quo shift in the comics, even though there wasn’t. Why do comic book companies do this kind of thing? Well, it all started 22 years ago with the “Death of Superman” storyline. When DC announced it was killing off Superman, almost every media outlet in the world treated it as a huge story. Some reporters didn’t realize he wasn’t being killed off for real; others knew, but wouldn’t let it get in the way of the story. And so a somewhat corny gimmick became the biggest source of free advertising a comic book company ever had. To this day, there are people who think Superman is dead in the comics because “The Death of Superman” received so much more coverage than “The Return of Superman” a year later.

That taught comic publishers that if you kill a famous character, it will get the kind of news attention that comic books almost never get otherwise. And they’ve continued to do it since then: Captain America died a few years ago (and then came back). Marvel’s big story for this year is “The Death of Wolverine” and, as with DC and Superman, they’re publicizing the death a long time in advance, to maximize the publicity they get.

But what happens if you want this kind of PR, but don’t want to leave your top character out of the comics for a year? Well, that’s what alternate universes are for: A lot of publishers have books about future versions of characters, or alternative versions of the characters, and they can kill the heroes in those books while still leaving them intact in all the regular books. That’s what happened a few years back, when Spider-Man was killed off (and replaced with a new alter ego) in “Ultimate Spider-Man,” a book that examines what Spidey would be like if he appealed to teenagers instead of middle-aged guys. This didn’t affect Spider-Man’s appearances in any of the regular comics, but the death was still covered in the press as if Marvel were killing Spider-Man. And so it is with Archie: Every story mentions, somewhere, that this is not going to affect the adventures of teen Archie, but who expects anyone to read that far?

Not that any of this matters, really. I mean, an alternate universe story, or an “imaginary story,” as they used to be called, is still a story and it might be worth reading. It’s just a warning: When you see a headline saying that a famous character is dying, just read a little further. It may turn out that he’s going to be appearing in an awful lot of stories the week after he dies.