How we'll remember 'Parks and Recreation'

From feminism to sitcom-subversion, here's why we should appreciate Parks and Recreation as its series finale airs tonight 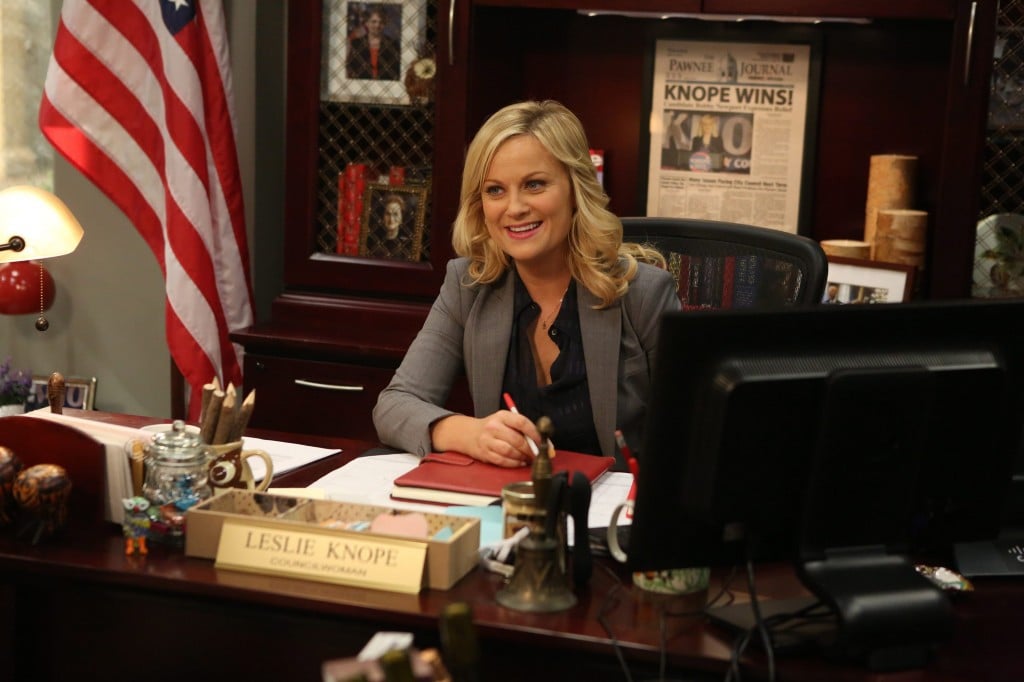 When Parks and Recreation began in 2009, it came with the feeling that it was doomed to fail. It was set to be a spinoff of The Office, a megahit that had just begun its long fade. Its first season copied all of The Office‘s long, languorous beats, so that it was a facsimile of a show that was indeed a facsimile of the U.K. original. For all her success on Saturday Night Live, the new show’s star, Amy Poehler, was essentially an unknown quantity, this being effectively her first major non-SNL role. It didn’t help, either, that while the show was trying to sell her as a strong, competent woman, viewers told showrunners she came off as “ditzy.” And it doesn’t help that the show is fundamentally about a small-town bureaucrat, hardly a sizzling sell.

But, seven years later, Parks and Rec has quietly become a show all its own, making a superstar out of Poehler while loosing itself from its Office strictures to embrace its unique brand of madcap energy into one of the three best TV-comedy ensembles of the decade. It was never a ratings champion, a phrase that’s increasingly, sadly, a synonym for “critical success.” And, by clocking in at seven years—Tuesday night marks the series finale—it actually achieves rarefied air in an increasingly fallow sitcom genre. But, while shows such as 30 Rock and even How I Met Your Mother earned raves and think pieces in the wake of their ends, Parks and Recreation wasn’t merely underappreciated: it was quietly subversive, a renegade among sitcoms.

Certainly, on its face, that’s not what the show is: There’s little unconventional about a sitcom about a person who falls in love and grows up, advancing from a small town to, inevitably, a big city. It rarely ventures outside the little community of Pawnee, Ind. It barely subverts the conventions of its form, too. While you can say it has changed the now-rote mockumentary style by feeling hardly like one at all—after shows such as The Office took it to its logical end by making the fictional camera people part of the show itself—Parks and Rec remains a narrative told with A- and B-stories with a rise in action neatly knitted up. And it wasn’t as openly risk-taking as its one-time NBC block-mate, Dan Harmon’s eternally doomed Community, or even 30 Rock, which had become a perfectly absurdist meta-joke by the time it wrapped up in 2012.

But for one, Parks and Rec‘s quietly progressive politics sets it apart—not just in its obvious belief in government, but its feminist postures, too. Take, for instance, the engine that drives Leslie, the show’s beating heart: the female friendship between her and Rashida Jones’s Ann Perkins. While the show whirls around and, undeniably, works because of the strong ensemble cast, the base is Ann and Leslie; even when Jones leaves the cast, you can feel her presence. Their friendship is the kind of pairing that doesn’t feel revolutionary until you consider that a show like Broad City probably couldn’t exist without proof that that kind of sisterly spirit can function onscreen.

And then there’s the case of Leslie and Ben, the will-they-won’t-they relationship that’s now de rigueur in all sitcoms. Except when they did get together, the show didn’t lose much momentum, thanks to that ensemble cast, but also because it’s one of the more feminist couples on TV—as Ben’s awkward, directionless, disgraced, ex-child mayor finds Leslie’s career to be the thing he most wants to endorse, support and love. “The things that you have done for me to help me, support me, surprise me, to make me happy, go above and beyond what any person deserves,” said Leslie in her wedding vows. As her campaign manager and, later, her boss at city hall, Ben’s unquestioning support, and the fact that he is Leslie’s number 1 fan, allows the show to be about her, without diminishing him—a kind of amazing relationship to see on TV, when you think about it.

Perhaps most noteworthy is how Parks and Rec defied a few major sitcom rules. Sitcoms are defined by their familiar beats, the inside jokes, the comfort with the characters, the reliable knowledge that, no matter what happens in each episode, everyone ends up exactly where he or she was, if not moved a halting inch in some other direction. A good sitcom is rote familiarity warped into fresh laughs. And Parks and Rec dared to play with that formula while it was still fetal, changing nearly the entire premise of the show at the beginning of its second season and eliminating the major stakes—the yawning pit that drives the show in Season 1 is quickly filled in the first minutes of Season 2. It shifted many of the character dynamics by introducing Rob Lowe’s Chris and Adam Scott’s Ben, while featuring Chris Pratt’s Andy, initially set to be written out, but now an essential part of how the show ticks. It’s a dangerous move to alter the bedrock, especially right after a single season, and even more so for a show that’s never been strong in the ratings war; all this happened in the face of sidelined and shortened seasons at least three times in its run. Despite that, Parks and Rec just kept getting better and better after that major second-season shift, doubling down on the things that made it good—the objectively unsexy pathos of small-town politics—and refusing to change its full-hearted core. “You don’t read the first eight pages of a book and then talk about whether the book works or not,” creator Michael Schur told the AV Club in 2011, and he proved all those critics wrong with this move.

Of course, other shows change things up. Watch the first episodes of any show, especially a comedy, and you’ll see characters fall away, motivations change. But Parks and Recreation did it boldly, did it significantly—and did it twice. Undaunted by the malaise that typifies late-life sitcoms, the show’s sixth season ended with what was, really, a perfect series finale, replete with fan-favourite cameos and tie-offs of old inside jokes—exactly the sentimental, satisfying ending you’d imagine from of a conventional sitcom—and then completely turning it on its head, fast-forwarding the show three years in its last minutes to set up the seventh season, a final season that takes place in the future. Where other sitcoms are content to debrief, tie up and burn out, Parks and Rec has spent its last season doing what it’s always tried to do, ever since that major second-season shift: be better, just like its relentless protagonist. In providing a completely new staging ground, tonight’s actual series finale may be the most ambitious in recent times: a fitting end to a show defined by its quiet bravura.