An artifact of '90s disaffection, 'The X-Files' returns—tailored for our current era of government distrust 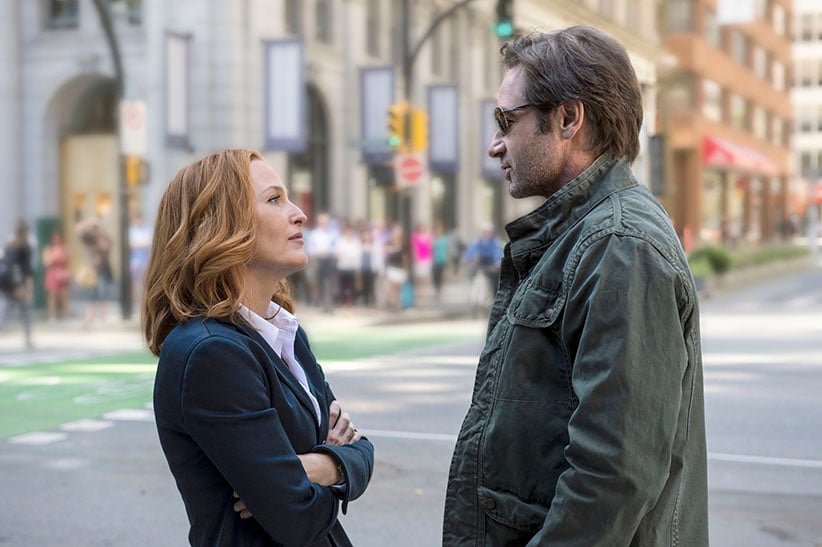 In the 1990s, something truly bizarre happened. Yes, the Iron Curtain dropped and neoliberalism surged worldwide, bringing capitalism to the post-Soviet world, while the NHL expansion brought pro hockey teams to sun-drenched bergs like Anaheim, Miami, Nashville and San Jose. Sure, people tuned in en masse to watch a show about nothing and Y2K-proof their personal computers, allaying fears that electronics would somehow malfunction and bring about Armageddon. But something else happened. Something really weird and improbable. Somehow, against all odds, science fiction became cool.

Gone were the refitted naval uniforms and rubbery pointed ears of Star Trek fandom. In the ’90s, shows such as Sliders, Quantum Leap, the rebooted Outer Limits, and the short-lived VR.5 brought science fiction back down to Earth. Forget five-year missions to explore strange new worlds. The sci-fi boom underscored the strangeness of our own world, one suddenly full of virtual-reality simulators, online communications that radically collapsed the distances between nations and ideologies, and fear-mongering Y2K apocalypticism. “As we near the year 2000,” Fox TV programming executive Bob Greenblatt told Time magazine in 1995, “people are becoming more open to what might lie beyond that magical moment.”

Premiering in 1993 and running for nine seasons, The X-Files saw Mulder and Scully brushing up against vampires, Satanic teens, a half-dozen breeds of aliens, shape-shifters, and even a burrowing garbage monster conjured to enforce complacency in a sleepy California suburb.

“It had a lot to do with world affairs at the time,” says Carter in an interview, explaining his show’s ability to seize the zeitgeist of its time. “There was relative freedom, and good times in America. For me, that’s a good time to double down on the paranoia. There weren’t many ready villains: the Wall had come down, the Soviet Union had disappeared, there was nothing to be afraid of. So as often happens with mankind, we often invent things to be afraid of. I think The X-Files played in that realm.”

The immediate aftermath of 9/11 saw this tone shift dramatically. In an instant, America had new enemies—even if the top brass wasn’t quite forthcoming (or even sure) about who those enemies were, exactly. “When we left in 2002, it wasn’t just a simple choice,” Carter explains. “We looked at the world and saw that nobody was much interested in government conspiracies. A lot of people were looking to their government to provide security. There wasn’t a lot of government distrust. There was a great amount of trust placed in authority.”

Related: The fight over privacy in America, and why Obama is as secretive as Bush

In the decade-and-a-half since 9/11, government in America and abroad has done pretty much everything possible to totally squander that implicit trust. It’s into this revived culture of distrust and paranoia that The X-Files makes its return, with a new six-episode mini-series that seems Mulder and Scully dragged out of retirement to dig into another sprawling, government conspiracy. This time, however, it’s not UFOs or black ooze or little green men that threaten the planet, but what the ever-watchful Mulder calls “a venal conspiracy of men against humanity.”

It’s a darkly ironic twist befitting the series: not only is the new X-Files series addressing our renewed culture of paranoia, suspicion and political subversion, it essentially predicted the sort of vast, invasive government collusion that we now take for granted. (Minus the aliens, black ooze and garbage monsters … as far as we know.) For Carter, it’s a chance to further develop the already bafflingly multifarious cover-up plot The X-Files spent nine seasons, and two feature films, building. “I see the conspiracy as building on itself, instead of being rebuilt,” he says. “It’s taken a big right turn, and is now part of what Mulder considers a bigger conspiracy.”

“We live in a Citizenfour world now,” Carter continues, a reference to Laura Poitras’s revealing 2014 documentary about the National Security Agency surveillance scandal. “Our government has admitted that they’re spying on us, among other abuses of the rights and liberties that we’ve allowed to be abridged.” His comments essentially echo those of Duchovny’s halfway-unhinged true believer (or true want-to-believer) in the new series. “They police us, spy on us, tell us it makes us safer,” says Mulder, in one of his characteristic rants against the machine. “We’ve never been in more danger.”

Related: So, when do we start caring about privacy issues?

There are traces of Gillian Anderson’s measured, compassionate, scientifically minded Dr. Scully in Carter, too. Originally assigned as Mulder’s foil, in place purely to debunk his byzantine theories, the skeptical Scully continues to balance a show that would otherwise be a full-blown descent into a frenzied, frantic mind. “I think most of us believe that the words ‘conspiracy theory’ are sometimes goofy,” says Carter, “that it’s bad and non-critical thinking, that it’s a facile solution to a problem, that it’s where the uninformed and paranoid go.”

And yet just like Fox Mulder, Chris Carter seems to believe that so-called conspiratorial thinking is natural—even necessary in order to resist the dehumanizing crush of government authority. “We begin thinking conspiratorially when we’re very young,” he says. “We believe that there are cabals, and that there are movements organized against our interests. This happens especially when our governments, and those in positions of authority, fail us. We see this every day in the newspaper.”

If the return of The X-Files proves anything—apart from the already taken-for-granted profitability of reviving any bygone franchise with an embedded fan base—it’s that the theories floated by science fiction aren’t just hip, cool and fashionable. They’re also urgent.