This week on Real Housewives of Vancouver

The ladies ditch their clothes. And their manners. 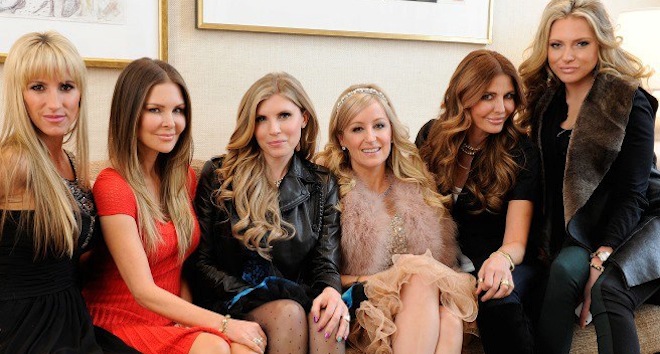 The gloves — and a whole lot of other clothing — came off as battle lines hardened on last night’s Real Housewives of Vancouver. The episode centred on a bikini fashion show at the swanky Opus Hotel in downtown Vancouver. Amanda, in good faith, invites Ioulia to model with her but soon regrets that decision as Ioulia hogs the spotlight, fussing over swimsuits and fishing for compliments during a rehearsal.

“I might have wanted to punch her out,” says Amanda, who heads over to her Jodi’s West Vancouver mansion to unwind. The two of them and Ronnie enjoy a bottle of non-alcoholic bubbly while Jodi prepares chocolate cake for the homeless. “There’s nothing like feeding the impoverished cake,” she muses. Ronnie secretly thinks a healthier meal, such as sandwiches, might have been more appropriate but then states the obvious, “Hey, beggars can’t be choosers.”  Feeling that it’s safe to vent, Amanda tells the ladies what went down with Ioulia earlier. But her personal attacks about Ioulia being a gold-digger rub Ronnie the wrong way, prompting her to tell Amanda that she’s “a little bitch.”

Tension also rises between Mary and Robin after Mary gets word that she’s been asked to sing the Canadian national anthem at an upcoming Grand Prix event. She is left to tell Robin that she hasn’t been selected to sing the U.S. anthem — despite being the only person who auditioned.

Meanwhile, Amanda heads back over to Ioulia’s place, where she confronts her about her high-maintenance behaviour. Ioulia, now upset, passive aggressively chooses not to get a spray tan with Amanda. Unfazed, Amanda goes through with the tan, but admits that she’s not enjoying it.

“I’m not really a big fan of getting naked and have someone spray me with wet brown stuff,” she explains. No disagreements here.

Finally, it’s almost time to hit the runway, but not without a little backstage drama first. Amanda jealously looks on at Ioulia, who has three stylists working on her hair and makeup and are showering her with praise. Then, as Amanda greets her boyfriend Kyle with a brief make-out session, Ioulia sneaks into a change room and steals her friend’s swimsuit.

As it turns out, though, Amanda was worked up for no reason — she nails her catwalk, leaving the awkward and somewhat drunk Ioulia in her dust.
Then Mary, Jodi, Ronnie and Robin, who were all in the audience, meet up with their model friends for dinner at Yaletown’s Blue Water Café.
The orders are barely placed when the ladies start in on each other, with Amanda calling Ioulia out for stealing her bikini.

“Vodka shots, anyone?” Ioulia shoots back, making a dig at Amanda’s alcoholism.

Things get uglier still, with Amanda commenting that Ioulia and her stepsons are the same age. “He basically married his own child,” she says of Ioulia’s husband.

When Ronnie tries to mediate the situation, Amanda tells her off as well. Not one to take criticism from anyone, Ronnie replies, “I’m doing everything in my power not to come over there and kick your ass.”

Jodi, meanwhile, defends Amanda, saying that she’s “refreshing.” Ronnie remarks that she’s done with the poor company and leaves dinner, with Mary and Robin following behind. Ioulia, seemingly indifferent to the fight, continues her meal. “I don’t care who’s coming or going, I’m hungry!” she says.

As the episode closes out, Jodi and Amanda knock their heads together and cackle, “Suck it up buttercup,” hinting a future alliance.