Then pay for it, says Jaime J. Weinman 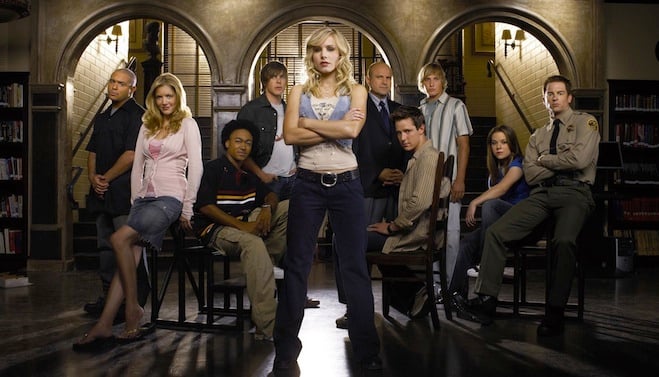 Everyone’s always talking about movie continuations of cancelled TV series. Mostly Arrested Development, where the team recently revealed that they don’t have a script or a studio, but they continue to tell us that the Netflix episodes are leading into this unmade movie. But the creator and star of Veronica Mars, Rob Thomas and Kristen Bell, are taking a more sensible tack: they’re telling fans that they can have a movie if they help finance it.

In one of the most ambitious Kickstarter projects to date, Thomas and Bell are trying to raise $2 million to help defray the cost of making the film. Warner Brothers, which owns the show but expressed doubts about whether there’s a market for such a movie (the disappointing box-office of Serenity was probably a big blow to other cult TV shows trying to get movies made), has agreed to make the film if they can reach their fundraising goal. I suppose even a low-budget film would wind up costing the studio more than what they raise on Kickstarter, if you include all the costs that go into production, marketing and distribution – but meeting the Kickstarter goal would help reduce the studio’s risk; it would also prove, maybe even more importantly, that there are people out there who like Veronica Mars so much that they’re willing to pay money for it, a much better sign for a movie than people who are willing to watch it for free.

, (Correction from comments, we foreigners can kick in money, we just don’t get the cool merchandise because they don’t have shipping outside the U.S. yet.) So we can just sit back and watch with interest: how high will the total pledges rise in 30 days? And if the movie does happen, will this inspire other Kickstarter-the-movie campaigns? The answer to the second question is “yes,” though it may not be as helpful for a movie version of a show that has a big ensemble cast with a lot of salaries to pay (like Arrested Development, but not only that one). Veronica Mars is almost perfect for a movie continuation because the show is primarily about one character, and most of the supporting characters – except maybe our own wondrous Enrico Colantoni – wouldn’t be required to be on screen a lot. They’d need Bell for most of the movie, but they could then work around everyone else’s schedule, as the Kickstarter announcement explains.

Well, good luck to them; this seems like one of the things Kickstarter was made for – raising money and proving that fans are willing to put their money where their mouths are. Now if only Warner Brothers would listen to my pitch to spin the WB back off from the CW.