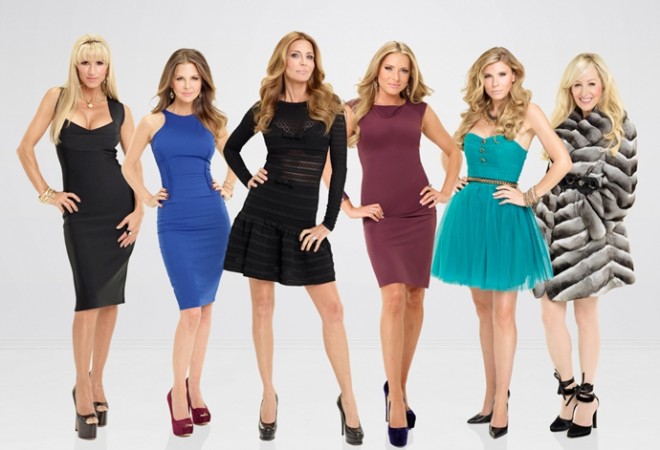 I have to admit, Housewives is getting harder and harder to stomach.

And it’s not just because, as a friend said, “they all look like aliens,” or the fact that I’m losing brain cells by the second watching the show. It’s more that the constant barrage of immaturity and nastiness — scripted or not — is infuriating and, as Ioulia points out in episode 7, kind of boring. If I’m going to watch a show with high school themes, it should really be Glee.

This week picks up in Toronto, where Jody is still judging Top Chef Canada.

Jody and her daughters Mia and Hannah decide to take Jody’s son Josh, who attends Ryerson, on a shopping trip.

It doesn’t take long for Jody to launch into the creepy mom act, stating that the boutique is “filled with yummy things” for her baby. Mia joins in too, saying she wants her brother to look like “a sex stud,” and complimenting him on his cute rear.

Ronnie and Robin also catch the shopping bug and step into Canopy Blue in the Lawrence Park area. We assume most of their brainpower will be zapped pairing sequined tops and skinny jeans, but things take a turn for the weird when Ronnie brings up a First Nations legend.

“Do you know the story of the old Indian chief?” she asks Robin, who is trying on a blue mini dress.

She then relays the story, which has to do with two wolves, one evil, one good, that are battling out within the chief. When the chief’s grandson asks, “Who will win?” — well, that’s when Robin asks, “Should I wear this tonight?” because she’s far more interested in trying on another skanky outfit than hearing the punch line to a fable.

Robin later lunches with Amanda, who spells out Robin’s choices relating to the Mary-Jody-Ronnie drama, in no uncertain terms: “Here’s the fence. You’re either on this or you’re on this side, but if you sit on the fence you’re going to get f–ked up the ass!”

At this point, Mary and Ronnie get together at Toula Ristorante and Bar. Both resolve to either bury the hatchet, or cut their losses and end the friendship.

They waste no time calling each other out on everything that has been pissing them off. Mary says Ronnie took a dig at her when she sarcastically asked “how many millions of records” Mary has sold, knowing full well that the pop star has never sold a million records.

She’s also very upset that Ronnie told her family, and particularly her kids, about her first marriage, which apparently was a secret.

Ronnie retorts, “You know what the snowball headed for hell is? Your lies.”

Finally, Mary apologizes for hurting Ronnie and Ronnie tells her that means a lot.

Says Mary, “I want to share our lives and share the bad times and good times. I want to go for our facelifts together.”

Looks like the latter has already happened a fair few times, judging from both of their attempts to cry during the exchange.

All of the Housewives then meet up for dinner at Brassai, where Ioulia immediately addresses the blowout that took place at the pseudo Playboy Mansion the night before.

“I do swear a lot, that’s my Russian thing, but I was really hurt to find out that I rubbed you the wrong way,” she says.

Robin starts crying recalling the incident and how Ioulia wouldn’t reply to her texts. This puzzles Ioulia, who says, “These women burst into tears too easily.”

Then it’s time to finish off Jody’s stint on Top Chef Canada, a canapé challenge that takes place at a backyard mansion party. Everyone except for Mary and Robin — who got too drunk the night before — are in attendance. And how do they choose to spend this lovely afternoon at an amazing house in a new city? By bitching about Mary, of course.

Ronnie, encouraged by Amanda and Jody, basically changes her mind about everything she said to her friend, and decides they should take a break. Then she rehashes all 20 years of their drama-marred history for the other girls. Ioulia is the only one who notices how pathetic this is, commenting, “To be so obsessed about Mary, it’s a little bit crazy.”

After the party, Ronnie, Amanda and Ioulia hop in a limo to meet Robin and Mary. On the way there, Ronnie comes to the conclusion that she is like Greek legend Maximus, from the movie Gladiator, leaving us to wonder what she’s been using as a substitute for her alcohol habit.

Ioulia, likely exhausted from all the crazy, forces Ronnie to confront Mary the second they sit down. Ronnie admits that she wants a break and then says, “You don’t really like me.” Mary admits that she doesn’t like a lot of things Ronnie has done. (Like opening her mouth? Yeah, I sympathize there.)

Amanda, the spoiled, bitchy Chihuahua of the group, chimes in, telling Mary, “Go f–k yourself.”

That’s the last straw for Mary, who takes off, trailed by Robin.

“You wanted me off this fence Amanda, well guess what?” she says as the episode comes to a close.