What is a happy ending for Hannah? 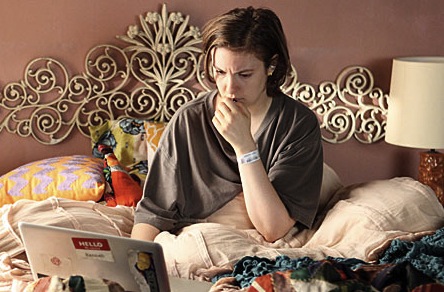 Colin Horgan is watching Season 2 of Girls and asking questions about it here each Monday. Here he is now with three questions on episode 10:

How much can you ask of other people?

There was a moment, a few episodes ago, when Hannah called her parents after visiting Jessa’s dad, when everything between them seemed to finally be on the right path. She told them she loved them, unreservedly, and her mother’s eventual skepticism that Hannah was really after some money seemed at the time to be almost a kind of an endearing parental dismissal – certainly not one with any overtly negative undertones. Like a joke, basically. Now, though, it looks a bit different.

Hannah, stuck and unable to complete the work on her book for which she’s already been paid an advance, calls her dad to ask for the money to pay it back, lest she produces nothing and is sued. She wants to be free of the money issue to “restore a little freedom” to her writing process. But her dad is immediately hostile. “You know, Hannah, I keep trying but you keep making me feel jerked around,” he seethes down the phone. “Jerked around how?” she asks. “Manipulated. That’s the way I feel, very manipulated,” he explains. “I stick up for you to your mother and you make me look like a fool.”

Yikes. We’re reminded suddenly of the moment her parents cut her loose from their financial aid. Then, in the context of this being a show about a privileged kid in a privileged state expecting money from her middle class parents to write and become the voice of “a generation,” the principled stance from Hannah’s folks looked totally justified, if not completely reasonable. It was even, perhaps, a winning point for the side of logic and hard work and all that other Protestant go-it-alone mentality stuff the culture at large seems to think has been lost on this millennial crowd; a victory for the boomers and Gen-X-ers who had to work for their keep. Now, though?

“You know when you’re young and you drop a glass and your dad says like, ‘Get out of the way,’ so you can be safe while he cleans it up?” Hannah asks Laird, after he’s finished cutting her hair (to correct from the go-it-alone attempt she made a little while earlier). “Well, now, no one really cares if I clean it up myself. No One really cares if I get cut with glass. If I break something no one says, ‘Let me take care of that.’ You know?”

How much can others ask of you?

“We have our experiences, and now they’re behind us,” Marnie tells Charlie over breakfast after a night of (apparently) very fulfilling love-making. “Like, we’re settled down. We’re old fogies now.” Charlie seems less sure. “Hm. Settled down.” Marnie picks up on his reticence. “Are you trying to tell me that we’re not dating?” she asks him. “I know how this works. I can take a f–king hint. I’m sorry, I just never imagined in a million hears that you and I would be having casual sex.” Here, she stands up and prepares to leave. From across the restaurant, she turns and asks, “So you really don’t want to date me? This is your last chance.” Charlie sits there. Marnie turns in a huff, and storms out.

But Charlie catches her and gets the truth. It might be the “last chance,” but that’s not what Marnie really wants. We all know what that is. Even Ray knows what that is – almost. Marnie doesn’t want what Charlie has, she just wants Charlie. All the singing and the carrying on was all for him. And she finally says so. “I don’t know what I’m doing,” she says at first. “This has been the worst year of my life.” Then: “I want you. know I’m a mess, but I want you. I want to see every morning and I want to make you a snack every night and eventually I want to have your little brown babies and I want to watch you die.”

“That’s all I ever wanted to hear,” he replies.

“Is it?” she asks. It is. “I love you,” Charlie tells her. And it turns out he’s been approaching things the same way she has. “Maybe I’m an idiot for it, but I always have. Everything good that I try to do, I do it because of you and I try to get away but I just keep coming back and that’s because I love you.”

Things are less loving across the borough, where Shosh takes the news poorly that Ray has been given a full manager position (or “District chief logistics and operations supervisor,” as Ray decides it’s called), at the new Grumpy’s in Brooklyn Heights, set to open soon (with a pizza oven). “It isn’t about the job, is it?” Ray asks her. No. No, it’s really not. And while Shoshanna is reluctant to say that she’s breaking it off with Ray, she says about as much in her Shosh-speak: “I love you so much, like to the end of the world and back so much. But sometimes I love you the way that like, I feel sorry for a monkey. They need so much help and they’re in such an ugly cage, you know what I mean?”

Ray speculates that there’s another man – perhaps some tall Scandinavian. It’s not another man. It’s the fact that Ray hates everything. “I can’t be surrounded by your negativity while I’m trying to grow into a fully formed human,” Shosh tells him. “I can’t be the only thing you like. And maybe I can deal with your black soul better when I’m older but I can’t handle it now, so maybe you just have to go change and we can be in love at another time.” And while Ray scolds her for not knowing the difference between negativity and critical thinking, we know that the opposite is true.

Shosh then goes to a bar. And meets a tall, blonde man to kiss.

What is a happy ending?

What kind of book is Hannah trying to write? She has a sentence typed out on her laptop when Marnie comes over to check on her. It says: “A friendship between college girls is grander and more dramatic than any romance…”. There’s probably some rule for this written down somewhere, but it’s generally a good idea – as David seems to actually know – that writing is much easier when you’re being honest. And as much as Hannah wants that sentence to be true, it’s not. She says as much to Jessa’s answering machine later that night.

“Oh, hello, you f–ker,” she starts into the silent void of Jessa’s phone’s hard drive. “Are you kidding me? Where did you go? And who am I supposed to talk to if you won’t answer your f–king phone? Ok? That anorexic Marnie? F–king Shoshanna? Or my stalker ex- boyfriend?” Then she self-pities, telling Jessa’s phone that none of the latter want to see her because of her terrible, self-inflicted, hair cut.

Her father might say here that she is being manipulative, and that’s likely true. Hannah’s greatest failing is that for all her inability to concoct a narrative about the reality which she inhabits and which involves interesting people other than herself, she has no problem conjuring up make-believe stories centered around her own anxieties and designed to evoke guilt from the listener. This is manipulative – to an extreme. It’s selfish.

Hannah hangs up and, obviously having never downloaded Charlie’s app, calls Adam. At that moment, Adam is busy taking out his sexual frustration on his current wood project in his apartment. Earlier, we saw him mount another attempt to alpha male all over Nat. He asks her: “You’re a dirty little whore and you love my cock?” like he was reading from some rote two-bit porno script that he and millions of other young millennial males know by heart, having heard some form of it ever since they got mobile 3G and five minutes alone in their room. “No, I can like your cock and not be a whore,” Nat replies, reasonably. “Do you understand?” Adam says he does, but he doesn’t like it. When Hannah calls via FaceTime, he sees her wacky hairdo, he sees her OCD twitches and he sees the pain on her face. He tells her to stay put, and, never hanging up the phone, he rushes to her apartment. She refuses to open the door, so he breaks it down, walks over to her bed, picks her up like a child and kisses her.

Life is tough. And being a grownup is tough – mostly because it means doing stuff day after day that you just don’t want to do. Or doing stuff that other people want you to do, even when you think you can’t. And everyone has to grow up and clean up their own glass and cut themselves and take care of it on their own at some point. But, probably, everyone also deserves to have someone there for them, all the same – someone who can say once in a while that everything is taken care of. We can give each other advice or money or education or technology or a haircut, but none of it, in the end, replaces a warm body standing nearby or a friendly voice at the end of a telephone line.