What Would Ryan Lochte Do? 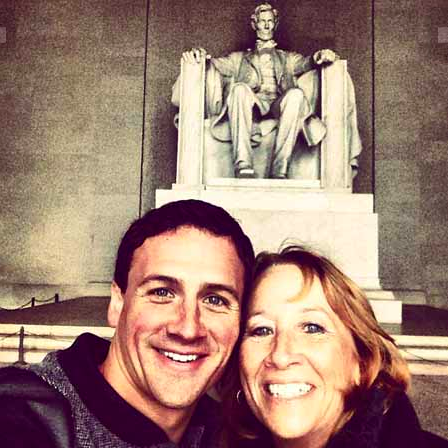 Lochte and his mom in front of the Lincoln Memorial (Instagram)

Ever so slightly enticed at the prospect of Ryan Lochte making a fool of himself in Washington, D.C., I tuned in for another episode of What Would Ryan Lochte Do? It will probably be the last time I do.

So little happened that I’m able to sum it up in about two sentences:

Lochte and his mom visited the nation’s capital so that Lochte could pick up an award for his Muscular Dystrophy charity work.

OK, that was one sentence.

Since I won’t be getting those 30 minutes back anyway, I thought I’d go ahead and relay Lochte’s dumbest quotes of the night.

On preparing his speech for the Muscular Dystrophy event:

Upon seeing the Washington Monument:

“I guarantee I’m going to be the first one peeing in the reflective pool.”

On peeing while in competition:

“I just started peeing in my Speedo on top of the blocks. And I had my goggles on and I started crying because I thought everyone behind me was looking at me and laughing. . . . I don’t even know if I did the right stroke. I think that was probably the only time I’ve ever been nervous before a race.”

“You know why he’s my favourite president? Cause what president can rock a top hat? Seriously, he’s got some mad swag.”

On Pope Benedict XVI’s retirement (while in conversation with “D.C. Girls” at the bar):

“I guess you can call him ex-Benedict.”

On Obamacare, gun control and other hot button issues:

“I swim. So I don’t know much about all this that’s going on.”

On why he frequently zones out:

On not knowing how to tie a tie:

“Can I just tie it in a knot like how I tie my shoes?”

Yes, folks, I think he’s broken a new world record — for dumbest Olympian of all time.