What’s not to love about Paw Patrol—if you’re a kid? 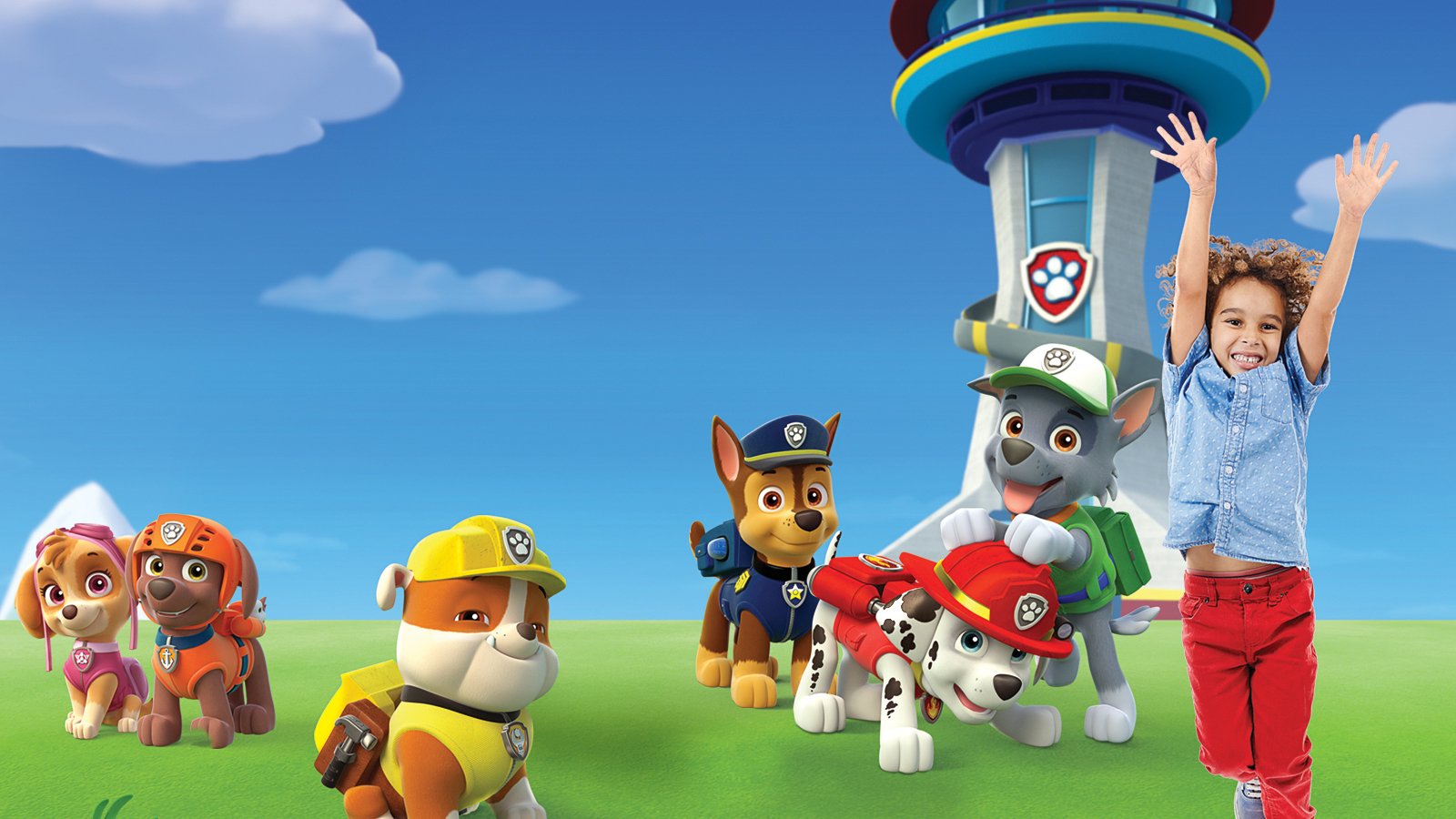 There are two kinds of children’s shows: the ones childless people have heard of, and the ones that are truly for children. Paw Patrol is the second kind. A computer-animated Canadian series about a boy named Ryder and his team of problem-solving dogs in a generic town known as Adventure Bay, Paw Patrol hasn’t inspired a cult of adult fans like My Little Pony; it doesn’t wink to parents the way SpongeBob SquarePants did. But since 2013 it’s been winning the hearts and minds of kids on TVO in Canada, Nickelodeon in the U.S., and, increasingly, around the world. “It’s probably the biggest kids’ show going right now,” says Frank Falcone, president and creative director of Guru Studio, which provides the animation.

One seemingly unrelated news story after another testifies to the fact that Paw Patrol is everywhere. In February, a Liverpool chain of pubs tried to hold an “unofficial Paw Patrol event” during school holidays, though it reportedly had to be cancelled when Nickelodeon objected to the unauthorized use of its characters. That same month, Popsugar reported that a three year-old in Brooklyn tried to wrap his favourite slinky toy around his neck: it had pictures of Paw Patrol characters on it.

Last year the show’s producer, toymaker Spin Master, sent out a Paw Patrol tour bus that made the rounds of events like U.S. state fairs—events that, like the show itself, don’t get a lot of publicity but attract a lot of children. And during the Christmas season last year, the Guardian reported that Paw Patrol toys were becoming a hot item, with “some parents paying double or triple the normal price” to get them in time for the holiday.

The conventional wisdom is that successful kids’ entertainment needs to work on two levels, the way Pixar movies create journeys that are fulfilling for children and adults. But while the computer-animated Paw Patrol may look a bit like a Pixar movie, it often leaves grown-ups baffled, and there’s a cottage industry of online pieces expressing dismay at its existence. Craig Silverman took time out from his main job as editor of Buzzfeed Canada to write a 19-part piece on “why Paw Patrol is a terrible kids’ show,” starting with the fact that all the adult characters are idiots: the only reason Ryder and the dogs have so many problems to solve is because of people like Capt’n Turbot, a captain who “should have his boating licence revoked due to extreme stupidity.”

Others have attacked the stereotypical portrayal of (and lack of merchandising for) its first female character, Skye—she rides a pink helicopter. There is now a second she-pup, Everest; still, E.R. Catalano, who writes the humourous parenting blog Zoe vs. the Universe, wrote a tongue-in-cheek piece about the effect the show was having on her daughter: “I was concerned Zoe was sexist since she seemed to prefer the male dogs to the female ones!”

Above all, the show is so toyetic—yes, that is a real word—that some animators may have been initially suspicious of the concept: “To be honest, when it came in our door, no one at our studio really wanted to touch it,” says Falcone, whose studio also animates and produces the show Justin Time. “They thought it was kind of trashy looking, and it was from a toy company, and there was nothing pure about it in their eyes.”

But there is at least one thing pure about Paw Patrol: it aims at preschool children and tries to be a show for them. It rarely winks at the adult audience. Many kids’ shows do, and the more grown-up material a children’s program has, the more likely it is to get favourable reviews. But on Paw Patrol, the dialogue is simple and easy to understand, and the episodes follow a clear pattern.

The formulaic nature of the stories, which more sophisticated kids’ shows disdain, is part of what appeals to the core audience. “Preschoolers need a certain element of repetition,” says Laura Clunie, Spin Master’s vice-president of entertainment. “We don’t want to be predictable, we want them to have new adventures. But within that, in the beginning you’ll have the pups playing around, they’ll have a relaxing moment, and then something happens which draws their attention. Ryder will call them up to the tower, they know their mission, and then they go out and make it right. That’s the shell that we follow.”

Children may not like material that is aimed over their heads. Sesame Street has gotten great press for doing parodies of grown-up shows like Mad Men and Game of Thrones. But as Jessica Pressler reported at Vulture this year, the producers of the show discovered that actual children were going through “fatigue” with adult humour. “The kids never got the parodies,” the senior vice-president of Sesame Workshop declared, ordering the writers to deal more with subjects that are relevant to preschoolers.

“They don’t care,” adds Drew Magary, who wrote for Deadspin about watching Paw Patrol with his kids. “Obviously it doesn’t matter to them if that one episode of Sesame Street was an elaborate Godfather parody. That means nothing to them.” Catalano adds: “I think it is strictly for kids—no meta-absurdity for parents to enjoy except for what we create ourselves.”

What a show like Paw Patrol relies on instead is simple jokes. “It’s mostly visual humour, and cute moments between the pups,” Clunie says. The dialogue depends as much as it can on catchphrases, such as, “No job is too big, no pup is too small!” in addition to devices like alliteration (“Those gulls have got to go!”), which are easily understood and easy to translate into other languages.

Even some parents enjoy the fact that the sonic and visual styles are friendly, charming kids rather than overwhelming them. Magary explains that he tries to steer his kids “to gentler stuff” like Paw Patrol, because “I think stuff that’s more hyper with lots of quick cuts and loud noises mess with their heads.”

In addition to not overwhelming kids’ senses, the series tries to reassure parents by teaching lessons about good values and friendship. Tara Tucker, a vice-president at Spin Master, says that the parents who like it “are fans of the show because of the positive messaging.” The show will never teach cynicism or irony the way some kids’ shows do.

But even the lessons seem more directly aimed at kids than the morals on more acclaimed series. Falcone says the formula of Paw Patrol stories is based on the concept of teaching kids to assemble the right tools for a project. “Someone’s in trouble, usually another animal, and they have to gather, analyze what the problem is, and then deploy the right dogs to go solve that problem,” he says. “Ryder is the vessel character: you look at him and say, ‘If I were that character, I would choose these three dogs.’ ” When asked what the series is teaching his kids, Magary replies: “I dunno, teamwork and stuff. That’s all good.” But the setup of the show—a kid with an unlimited budget, cool gadgets, and puppy friends—is as much a fantasy as a lesson. 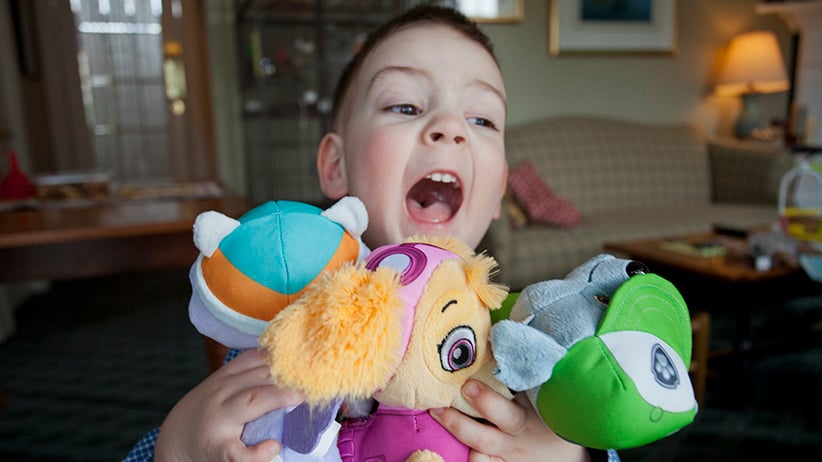 A boy with Paw Patrol toys. (Photograph by Liz Sullivan)

None of this means parents have much reason to love the show, and some are worried about it. The top consumer review of the show on the parents’ advocacy site Common Sense Media calls it “a construction out of the mind of a market researcher,” while another calls it “carefully engineered to appeal to little-boy interests.” But children might wonder if it’s so bad that a show is crafted to appeal to them, not their parents. The message that all adults are incompetent, and only children and puppies can solve problems, is bound to strike a chord with them.

The sense that older people just don’t get it may be enhanced by the way the producers connect the stories to modern-day technology. Ryder often communicates through what looks like a smartphone, and the stories operate on the basis that the characters are in constant contact through screens. When kids’ shows deal with technology, they sometimes pander to parents by making smartphones look evil or distracting; on Paw Patrol, tech literally saves lives.

Clunie says this choice was “not from a product placement point of view,” but just an attempt to portray a world that modern kids would recognize: “You’ll have Ryder with a tablet, and it stands to reason that he needs to use it to communicate with the pups, and call them to him, and adduce information. It’s used to help the audience understand where we’re at in the story and how we’re going to move forward.” Many kids’ shows seem like they’re set in the past—including Sesame Street, which takes place in an inner-city neighbourhood from the 1960s. Paw Patrol is mostly non-nostalgic.

All of this means grown-ups will mostly have to scratch their heads and wonder why their children are demanding puppy-related toys. “I can’t explain it,” Magary says of the success of this and other cute Canadian cartoons, like Caillou. “Frankly, I was hoping you Canadians had answers for me.” The only answer may be that it’s not for you, it’s for them. Parents are learning to resign themselves to that. “It’s a relatively benign influence,” Catalano says of the show’s impact on her daughter. “For instance, the dogs were treated to pizza at episode’s end and she turned to me and said, ‘Can we have pizza tonight?’ As long as they’re not trying meth, I guess I’m okay with that!”