When is it OK to admit to what you want? 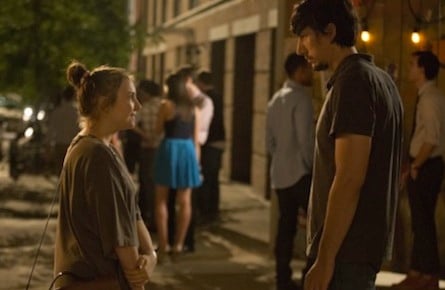 Colin Horgan is watching Season 2 of Girls and asking questions about it here each Monday. Here he is now with three questions on episode 9:

When is it OK to admit to what you want?

There’s probably a very simple reason Hannah hasn’t written the kind of thing David was expecting in her e-book. During a visit for an update on her progress, he tells her bluntly he stopped reading her pages, and wonders aloud what happened to all the “sexual sadness”. Hannah sits across from him, apparently unwilling to explain the situation. Her sexual sadness – or at least, the interesting part of it, I guess – walked out the door accompanied by two police offers earlier this season, and is now dating a pretty clean cut girl named Natalia.

In fact, we’d just seen him, moments earlier, preparing to sleep with Natalia for the first time, and unlike Hannah, she has a few boundaries – including, we learn, not doing it immediately, but rather taking things fairly slowly. And we know, even as Adam agrees to them, that it’s going to be a problem. Eventually. Still, Adam and Nat seem still quite taken with each other when, a day or so later, she invites him to a party her newly-engaged friend (who, it turns out, is a real jerk – she tells Nat that Adam looks like Peter Pan), and confirms to him that he’s her “boyfriend.” Adam, who earlier this year, disputed actually putting a label on his relationship with Hannah, is happy with the term. But at the party, he realizes Nat’s world is pretty different, her friends cut from a different cloth than he. So, he steps out to get some air, and runs into Hannah.

She’s not wearing any pants.

It’s not an unfamiliar thing for Hannah, but there’s a fairly complicated backstory for this particular instance. While sitting on the floor (pants-less) in her apartment, Hannah catches a sliver in her butt, and, after removing it in the washroom, decides to clean her ears. To the extreme. She manages to injure her inner ear, apparently quite badly. She calls her parents – though it’s not clear why – and finally ends up at the hospital to have the q-tip removed. Though, she decides to keep it once it’s out. The doctor suggests she frame it.

She runs into Adam on her way back home from the hospital. Fairly quickly, he tells her he’s at a party with his girlfriend. “Your girlfriend. Wow. You have a girlfriend, the kind of girlfriend whose friends get engaged, so she must be — what’s her name?” Hannah babbles. After Adam tells her, they establish that Natalia is a cool name. Still wanting to talk, Hannah explains herself. “Well, I’m just coming from the hospital because I shoved this q-tip down my earhole.” Adam is duly shocked. “Jesus f–king Christ, kid, be careful.” Hannah notes the term. “Kid,” she says, “That’s very nice to hear you say that, it, uh, gives me a weird feeling.” That feeling is called being patronized. She tries to tell Adam about her book, but he’s not interested. He tells her to put some pants on, and then goes inside to (significantly, given he’s recovering) have a drink and dance.

Later, Adam and Nat return to his apartment (they were at hers earlier, and it was, like her, appropriately tidy). Nat comments that Adam’s place is “depressing,” and “darker” than she thinks he actually is.

He changes her mind pretty quickly. He tells her to get on all fours and crawl down the hall to his bedroom. She obliges, though clearly unsure of what’s about to happen. “Okay so um, what is it you’re going for exactly?” she asks him. “I’m going to f–k you from behind,” he says, before grabbing her, throwing her on the bed and doing exactly that. Hard.

Then, after asking whether she likes him a lot (yes), he pulls out and ejaculates on her chest. Then, he takes his shirt off and wipes her clean with it. She’s obviously stunned by this turn of events. “I don’t think I liked that,” she says, before deciding for sure “I like, really didn’t like that.”

“Is this it? Are you done with me?” Adam asks. And one has to wonder, with Hannah fresh in his mind again, whether he wanted all along for the answer to be yes.

When is OK do you go back to what you wanted all along?

Across town in Manhattan, Charlie’s internet company is throwing a party for having hit 20,000 monthly average users – a party Ray, Shosh, and Marnie have been invited to attend (the latter after he stood her up for a lunch date earlier that day). Marnie insists that Ray confirm to her that she has a good singing voice, and he grudgingly obliges. It turns out to be the last-minute semi-pep-talk she needed before unveiling her special surprise. After queuing up her iPod, Marnie takes the mic and performs a strange and so, so, so very awkward lounge rendition of Kanye West’s “Stronger.” The reception is middling to negative, and nobody applauds when she’s finished.

Charlie takes her aside to his office afterward. “Should I be embarrassed?” Marnie asks. “You don’t have to try to make me like, feel better or anything.” Charlie quickly assures he has no such plans. “You have got to get your shit together,” he tells her before diagnosing her current state in exactly the same terms Marnie described his only an episode earlier. “You are flailing,” Charlie says. “I’ve never seen you like this before.” He tells her she seems “manic,” speculates somewhat about what happened between her and Booth, and asks “what can I do to help?” Help isn’t what Marnie thinks she’s looking for. She isn’t the one who’s flailing, after all. She’s the one who has her life together, right?

“Oh my God, no. No, no, no. I’m really good, actually. And sometimes, feeling being good all the time feels really bad,” she says, without any explanation of what that means. Perhaps she’s right, though – or, at least, Adam would certainly agree with that. “But I’m on a journey, it’s my journey. And I’m OK. And please don’t pity me,” Marnie continues.

Charlie says he’s not, but she’s not convinced. Then he kisses her and, very quickly, they’re having sex on his desk.

When is it OK to not want it anymore?

Across the room, Shosh is still suffering from the guilt of having kissed the doorman, and is evidently increasingly wondering about what value Ray brings to the table in her life. When they arrive at the party, Ray immediately disparages the party, telling Charlie it’s a bit bourgeois. “I don’t know why he’s acting this way,” Shosh tells Charlie. “He’s Ray. That’s how he is,” Charlie replies. “Yep,” Shosh says, “he’s Ray. And that’s how he is.” There’s not much more to say, really. Unlike everyone else on this show (even Shosh), Ray is a Constant. He’s the unchanging in a world of turbulence and noise. He knows he has to change something, but unlike any of the others, he rarely – if ever – acts on his desires or on his impulses. Just the opposite, he sees his desires and impulses as illogical, without understanding that’s what makes them important.

A bit later, he tries to put his arm around Shosh and she brusquely walks away. Catching up with her, he asks the key question: “Why are you avoiding me?” Shosh disputes this, saying she’s simply socializing. “I’m sorry if that’s not working for you, my social butterfly-ness,” she tells him. But Ray puts it in context. She was acting weird before they got there, too – for days, he says. “Level with me. Are you sick of me?” he asks her.

“I did something bad,” Shosh finally says. “I’m really sorry, and it didn’t mean anything, but I held the doorman’s hand,” she lies to him. “You held the doorman’s hand?” he asks. “I know, I’m sorry. It’s terrible and you probably think I’m a whore and you want to break up with me,” Shosh says, as if it’s a wish list. Ray just chuckles. What a silly kid, this Shosh. “Do you still want to be with me?” he asks. Shosh says “Mmhmm” as her face says no. Ray wraps his arms around her. “I love you so much,” he tells her. “Well, good,” she says.

Back at her apartment, and still faced with a broader assignment to write a novel now, rather than just an e-book – the project she wanted all along – Hannah takes the same q-tip and sticks the clean end into her other ear. Hard.