Will it all work out on 'Girls' the way you think? 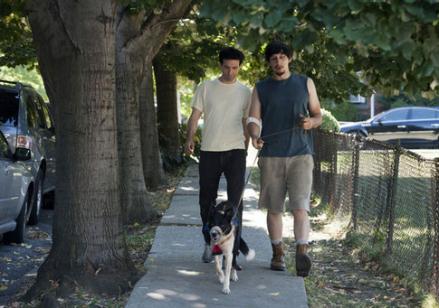 Will it all work out the way you think it might?

Suddenly, though they apparently only really just met, Adam asks Ray how things are going between him and Shoshanna. The question seems an odd one, but perhaps there really wasn’t anything else for the two of them to talk about. Their afternoon friendship, contrived in order to bring an angry, stolen dog back to his rightful owner on Staten Island, was a strange happening, built on Ray’s attraction to the idea that Adam might need a bit more muscle to deal with a problem, another man around to help out.

“Good… really good,” he tells Adam, referring to his relationship, on the ferry to Staten Island. “I know she thinks I haven’t done enough with my life, considering my age.”

This is fresh in his mind. Earlier, Shoshanna encourages him to sign up for a three-day course on entrepreneurship at the Learning Annex (featuring a guest speech by Donald Trump, who Shosh thinks should never have hired his daughter for Celebrity Apprentice). Ray scoffs at the idea that being an entrepreneur could potentially make someone happy for the rest of their lives. “Don’t you want to own your own coffee shop some day?” Shosh asks him. “No,” he replies flatly.

“It’s hard to tell someone so young that things don’t always end up the way you thought they’d be,” Ray tells Adam on the ferry. “Maybe it’s weird that I’m dating someone so young.” This sums up his worldview, and it’s also pretty patronizing. What’s so hard about telling someone younger than you that things won’t always turn out the way they think they might? Nothing, obviously. Here, Ray speaks volumes about how he sees Shoshanna. Or, at least, maybe how he wants Adam to think he sees Shoshanna – just a young kid he’s found himself caught up with, and not the love of his life. An attempt, perhaps, at a kind of aloofness Ray is probably fundamentally incapable of actually exuding for real.

Adam sees it a different way. Later, when they’re wandering the streets of Staten Island, for some reason they get into an argument about Hannah. After Adam complains that Hannah is like a carnival toy that you try and try to win, but realize only later that you never really wanted it it in the first place, Ray – maybe in an attempt at sympathy – tells Adam he’s never found Hannah attractive. Adam takes this badly, and rounds on Ray, admonishing him for his relationship with Shoshanna, which he quickly sums up like this: “You don’t know shit about love. What you’re doing with Shoshanna, it’s not real. She’s just some kid you feel safe with because you know it won’t work out. You’re just babies holding hands.”

Which is true in some ways, though it unfairly belittles the relationship, overall. There’s no reason not to think the feelings Ray and Shosh have for one another are real and – if we have to put it this way – fully matured. But they’re both confused about what they have, Ray especially, partly because some of what Adam says is entirely accurate. Ray can be committed only because he has a built-in trap door: When he gets bored, he has an excuse at the ready. She was too young. It would never work out, anyway. Things generally don’t, right, so why expect them to?

What should you expect from others?

Meanwhile, across town, Marnie is in bed with Booth Jonathan when his assistant, Sujin, wanders in to deliver news that the groceries have arrived. Booth Jonathan takes the opportunity – while lying stark naked, uncovered, on the bed – to fire her for having eaten some of his ice cream after a prior grocery trip. Then he tells Marnie he’ll need her to host a party he’s going to throw. Marnie accepts, blind to what the request really means. “It’s like happening on a nice level, on a fancy nice level… It has to be perfect,” she later tells Shosh as she picks out a possible wardrobe. “I mean, this is the first thing we’re hosting together as a couple.” It’s all very glamorous in Marnie’s mind – so much so that when Shosh asks, “Omigod, can I come?” Marnie simply replies with a short, awkward, “Um.” The answer is no. Marnie hangs with Booth Jonathan now, and as her plastic insane-o fashion dress later exposes, she’s caught up in the idea that she’s now part of the artsy elite of New York, the other half of whatever power couple this is.

Of course, it all goes wrong eventually. As they stand in Booth Jonathan’s wine cellar, he offers her $500 as payment for her having worked the party. “You don’t have to pay me, I’m your girlfriend,” she tells him. “I didn’t realize I had a girlfriend,” he replies, somewhat predictably, and then a moment later reveals he had been sleeping with Sujin, but that she “really got the situation.” Here, Marnie starts to cry. “Usually when I think someone’s my boyfriend, they’re my boyfriend,” she sputters. “I hoped you’re my boyfriend. And I’m a long-time fan of your work and I just liked everything in your life and I’m wearing this dress and I like you’re house,” she rambles.

Booth Jonathan then asks her a very good question: “Do you think you enjoyed hanging out with me or my work more?” Marnie admits she fell in love with the idea of being with him. “F–k this!” Booth Jonathan yells, realizing they were both expecting something different. “See, this is exactly why I can’t hang out with anyone, because everyone just uses me for what I represent to them.”

What should you expect from yourself?

After being berated by a teenage girl on Staten Island, Ray sits with the dog and evaluates his life. He concludes he isn’t anything. It’s bleak, but inaccurate. Earlier, on the ferry, Adam tells Ray it’s not weird that he’s dating a younger woman because “young girls are great. Young girls and older ladies. It’s the in-betweens that are a problem.” Ray agrees. “Right, exactly. Women under 18 and over 40 are the best at relationships,” he says. “The young ones, they can still maintain enough insecurity to be vulnerable, which is attractive. And the older ones, they don’t have these bullshit expectations of what a relationship needs to be or doesn’t need to be.”

How much Ray actually knows about how good women of any age are at relationships is entirely up for debate, but we’d have to guess very little. Everything else is projection; his own self-doubts and anxieties plastered onto a faceless mob of women aged 19 to 39 who are either not vulnerable enough for Ray to railroad with his scoffing quasi-intellectualism, or who are just apparently expecting too much of him. But what do those expectations look like? And, more importantly, are they accurate? Ray’s problem is that for all his examination of the great truths of the world (ie. nothing ever works out), he seems incapable of assessing what he expects from himself. He can describe a surface-level review of his current state (he’s a worthless loser), but that’s built wholly on what he thinks others see of him. It’s devoid of personal insight. It’s as if he’s too afraid to imagine an alternative. What else does he expect of himself? We don’t know. Neither does he.

Back at the party, Hannah stands awkwardly by a wall, having been abandoned quickly by Marnie, who gives some guy named Sketch an over-the-top hello. Hannah, who’s been trying to tell Marnie her good news – that she’s going to write an e-book (which she has to produce in a month) – is left alone and quickly learns from a dude in the bathroom line that Sketch (of all people) is also writing an e-book. Suddenly, her project seems a bit less important.

She should have just listened to Jessa. Earlier, back at their now-shared apartment, Hannah tries to explain how her writing is progressing (it’s not, apart from the title of the first chapter: ‘Room for cream?’). “With a first book, you have this duty to express yourself in a really clear way,” she tells Jessa, as if it were really something she knew, and not just what Hannah hopes can be what happens. Jessa dismisses the idea: “Whether you write this book or not, it’s not going to change anything. This book doesn’t matter, that’s the first thing you need to know.” This is good advice. Not only would that mindset free Hannah of unnecessary pressure, but it might force her to, y’know, re-evaluate her expectations.