The architects who want to build housing for the millions 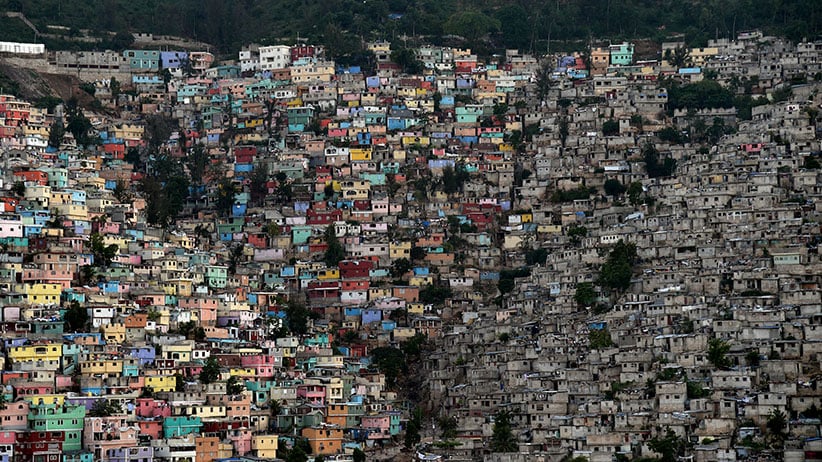 The neighborhoods of Jalousie (L), Philippeaux (C) and Desermites (R) in the commune of Petion Ville, Port au-Prince are pictured on October 26, 2015. (HECTOR RETAMAL/AFP/Getty Images)

The image chosen to represent Reporting from the Front, the 15th Venice Architecture Biennale, is a photograph of an elderly archaeologist named Maria Reiche in a housedress standing atop a steel ladder. She is looking out over a desert for traces of a culture that disappeared long ago. Reiche could not afford an airplane to do her job, so she improvised. The photograph is a fitting symbol for a show that to a large extent is devoted to celebrating activist architects working in the trenches on some of the world’s most formidable challenges.

Asked to climb Reiche’s ladder and describe what he saw, the Biennale’s curator, Chilean architect Alejandro Aravena, erupted with a passion that’s all too often missing from his profession. “We need to build a one-million-person city per week over the next 15 years for $10,000 per family,” he said. If we don’t respond adequately to this global challenge by 2030, he added, the world’s slums and favelas will swell with more than a billion residents living in deplorable conditions.

Other issues in Aravena’s brief for this year’s Biennale, which opened last week, include sustainability, pollution, waste and quality of life. At the same time, he wants architecture to do something about the metastasizing “mediocrity” infecting the built environment today: the thickets of uninspired towers and soulless developments transforming cities such as Toronto and Vancouver.

We are informed that this is not intended to be a “Biennale of the poor.” However, readers of design magazines and newspaper real estate sections undoubtedly will be unfamiliar with many of the types of structures on display. The world’s most important architecture show includes work from a host of little-known architects, a great many of whom work south of the equator. This is not a Biennale for the next Bilbao Museum, but one devoted to “humanitarian architecture.” There are examples of an unsuccessful social housing project in France that was renovated to be made more livable, and a model for a multi-level development in China that can accommodate large numbers of people within a relatively small footprint, yet also provide a great deal of open space. Some of the striking revelations here are the ways in which contemporary technologies and techniques are being used to unlock latent possibilities in preindustrial building materials such as bamboo, rammed earth and bricks.

The new faces and ideas are intended to serve as a corrective. Heeding the cries of Occupy Wall Street and other cultural cues, the profession has been in mea culpa mode for the past few years. The curator of the 2014 Biennale, Rem Koolhaas, who designs high- end fashion stores and corporate headquarters, complained about the market economy eroding the moral status of architecture, but failed to provide a roadmap out of the morass. Aravena, who won this year’s Pritzker Architecture Prize and is best known for his innovative housing designs for victims of disaster, is better positioned to berate the troops. 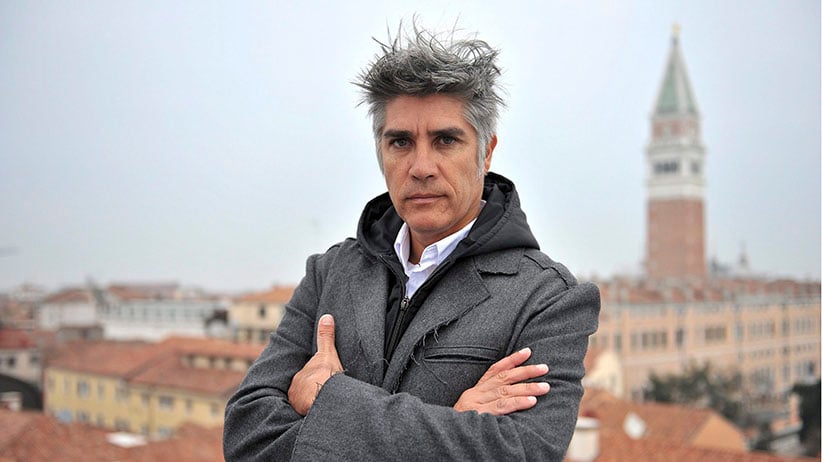 Director of the Venice Biennale of Architecture Alejandro Aravena, from Chile, poses with St. Mark’s bell tower in the background, on the occasion of the presentation of the 15th International Architecture Exhibition, in Venice, Italy, Monday, Feb. 22, 2106. (Luigi Costantini/AP)

Dressed in a wrinkled white shirt with spiked graying hair, Aravena, 48, looked like a rebel and spoke like one too when he showed up at the Biennale’s opening in Venice’s cavernous Arsenale building. “Corporate architects are the real bad guys,” he said, “these offices with thousands of architects who are there just to help private capital to make profit, rather than contributing to the public good.”

One of the first exhibits in the show, by the Chinese architects Wang Shu and Lu Wenyu perfectly exemplifies his agenda. It includes large pallets of recycled bricks and latticed wood neatly displayed, and videos telling the story of the two architects’ campaign to save China’s imperilled architectural heritage. In 2012, Wang, who had just won a Pritzker prize, was approached by the municipal government of Fuyang to design the city’s museum. Instead of immediately accepting the job, he wielded his newly won prestige and made demands. Fuyang had to commit to saving the remaining traditional villages in the area from the juggernaut of suburban tract development that was consuming much of China’s countryside. The two architects incorporated traditional materials and hand construction techniques into their design for the new museum.

“Structure is about forces that you had better agree with: gravity, common sense,” Aravena told his audience at the Biennale. “This should be at the core of what architecture is trying to give form to.” 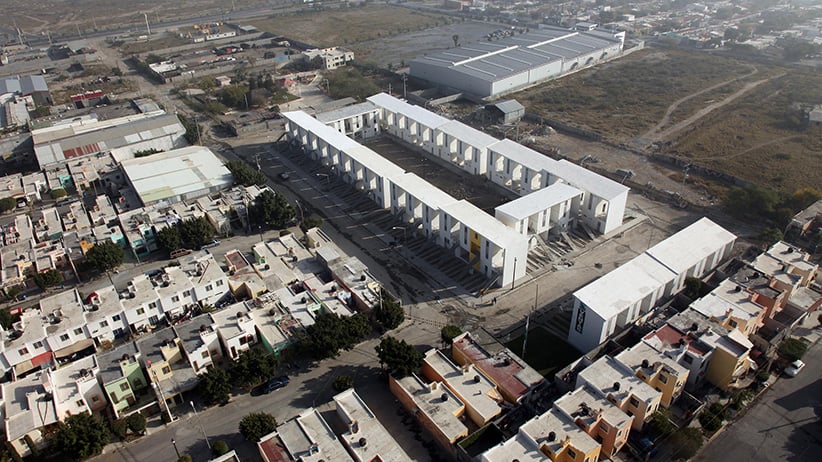 An aerial shot of the Monterrey Housing project built in Monterrey, Mexico in 2010. “Half of a good house” development financed with public money. (Ramiro Ramirez)

A visitor to this year’s Biennale can’t help but think of those words as he passes under a giant vaulted structure comprised of slabs of limestone that would violate most building codes. Although it is only an eggshell thick in places, the soaring unreinforced structure designed by the Block Research Group at ETH Zurich and MIT professor John Ochsendorf is not dangerous. Inspired by the Mediterranean arch, it relies on compression for stability.

Nearby are two prototypes of concrete floor slabs, each with a series of embedded arches, which the team designed with digital fabrication and architectural form-finding technology. Thanks to the arch supports, these slabs require very little steel reinforcement and use 70 per cent less concrete than a typical concrete slab. “We are trying to change the construction industry,” says MIT’s Ochsendorf. “The challenge for the 21st century is how do we make architecture that celebrates creativity while reducing the global carbon footprint.”

That idea is echoed by the award of a Golden Lion, the festival’s top honour, to Paraguayan architect Solano Benítez. His enormous parabola of brick panels, which is so slender that you might have doubts about walking under it, dominates a large room in the Biennale’s Central Pavilion. Thanks to these types of prefabricated panels, unskilled labourers without a mason’s training can work in Paraguay’s construction industry. In his essay on Benítez’s work, Aravena notes that because bricks are one of the most abundant and inexpensive resources in the world, these types of panel systems could be used to help build cost-effective housing for the great mass of migrants moving to cities. 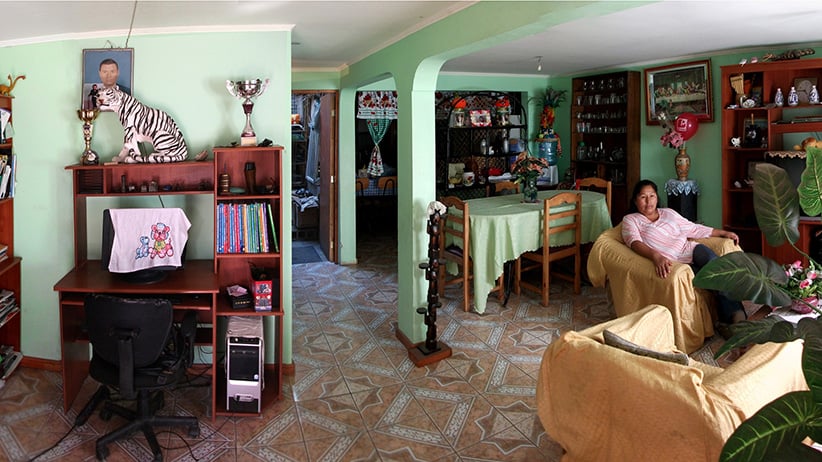 The interior of a house after residents have moved in to the Quinta Monroy Housing project, in Iquique, Chile in 2004. (Tadeuz Jalocha)

Aravena’s own trailblazing work designing what’s known in the business as “incremental housing” would fit nicely into this year’s Biennale. To stretch limited resources and to ensure expeditious construction for victims of a 2010 earthquake in Chile, he designed half-finished houses with the basic requirements for shelter. The other half of the structure was left as a shell that the earthquake victims could eventually build out once they got established.

One of the largest architectural models in the Biennale displays multi-storey low-cost housing, public open spaces and industrial facilities that could be built to accommodate some of the more than a million immigrants who have come across Germany’s borders in just the last year. The model, from the German firm BeL Architects, illustrates a strategy for rapid and inexpensive construction under which migrants would be presented with a basic framework of columns, slabs and beams and then given the opportunity to customize and complete their dwellings under supervision from German construction professionals. Jörg Leeser, a principal in BeL Architects, refers to his plan as the “second stage of incremental housing.” The plan replicates a strategy realized in an actual building in Hamburg that BeL Architects designed called Grundbau und Siedler. However, Leeser says because of the proposed building heights and mix of residential and industrial uses, German zoning codes would have to be revamped in order for it to get built. 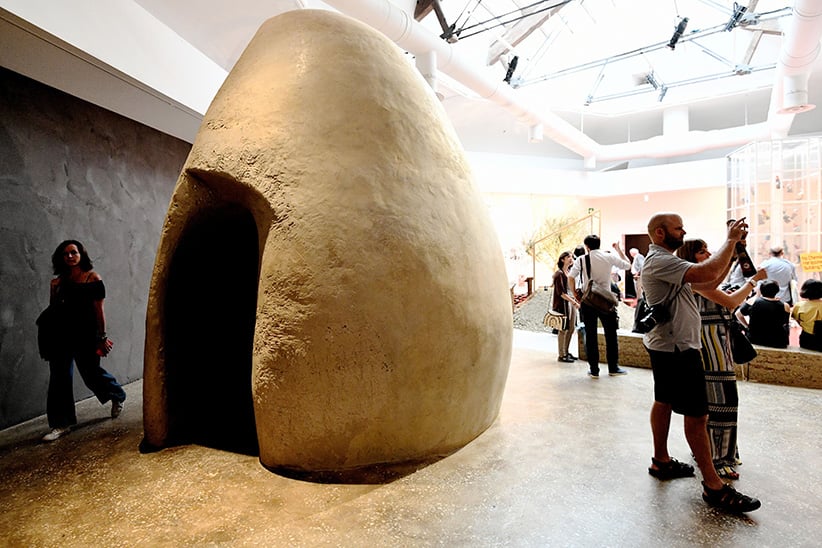 A picture shows a mud house built in Bangladesh by architects Anna Heringer, Martin Rauch, and Andres Lepik, during the opening of the 15th International Architecture Exhibition in Venice on May 26, 2016. The Biennale, entitled “Reporting from the front”, curated by Chilean Alejandro Aravena will be open to the public from May 28 through Nov. 27, 2016, in The Arsenal gardens. (Vincenzo Pinto/ /AFP/Getty Images) (VINCENZO PINTO/AFP/Getty Images)

Building codes in most Western countries also generally ban the use of mud as a building material, but Anna Heringer, an architect who uses new technologies to enhance the performance of this most historic of building materials, is waging a campaign to change the rules. Her cozy mud “nugget,” in the Biennale’s Central Pavilion, is a nice place to recover from the barrage of information. In addition to serving as excellent insulation, the generally no-cost 100 per cent recyclable material is easily maintained and repaired. “What is very important for us is that this is not something that just works for Bangladesh or Africa or developing countries,” Heringer says. “It is also something that works well for Switzerland. I really believe that it is a global strategy for sustainability.”

To be sure, for some of the most promising examples of the humanitarian architecture in this show to be realized on a large scale will require the co-operation of the people who wield real power: politicians and developers. Still, after you are ﬁnished here, the world’s most pressing problems no longer seem so overwhelming. The main obstacle to progress, as much as inflexible building and zoning codes, is a myopic way of looking at our surroundings.

Taking inspiration from the photograph he chose to represent his show, Aravena says that he hopes that visitors will “expand their horizon the same way that Maria Reiche was going up a ladder and understanding that things could be different.”