Vimy: The day the earth shook

In 2007, for the 90th anniversary of Canada's battle at Vimy Ridge, novelist Joseph Boyden returned to the trenches, conjuring the fallen 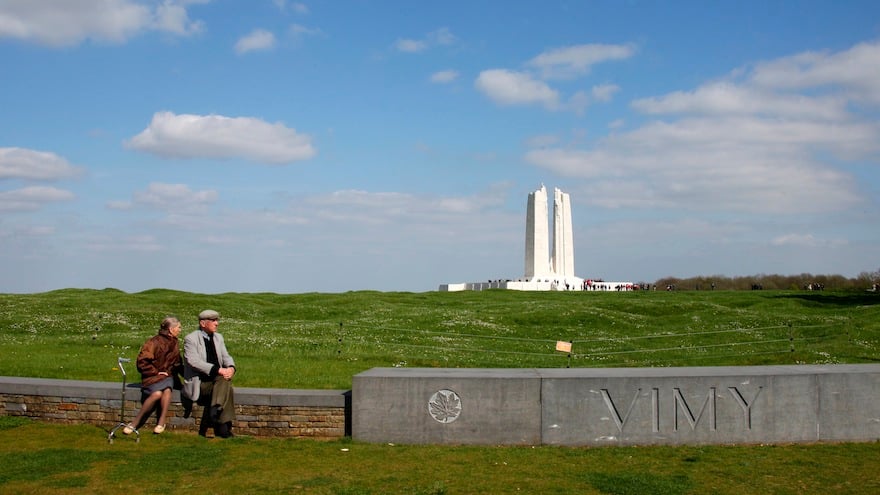 A couple look on, at the end of an official ceremony to commemorate the anniversary of the battle of Arras and Capture of Vimy Ridge, at the Canadian National Vimy Memorial, in Vimy, northern France, Wednesday, April 9, 2014. (AP Photo/Michel Spingler)

That bit of pasture and bush in northern France cradling Vimy Ridge is as close to a colony as Canada might ever have. Interesting to think about, this reverse migration. Ninety years ago, on April 9, all four divisions of the Canadian Army came together for the first time, 100,000 lice-infested, belligerent, rebellious and impeccably prepared soldiers, asked to do what both France and England had catastrophically failed to do in previous years: take a near impenetrable fortress that guarded the Douai Plain, a vital cog in Germany’s war machine. A literal uphill battle.

April 9 thunders in, just as each new day has for the last 20, the roar of a massive Canadian artillery barrage on the German positions so loud and long you don’t know if you’ll ever hear much of anything again. The rumbling shock and thud of exploding shells has loosened your teeth and created a week’s long migraine. But this morning is different.

The shaking of the earth is muffled because you are underground, squeezed into a long and dimly lit chalk cavern, one of thousands of stinking men ready to pour out from holes in the dirt when the whistle blows. You’re a young buck from Saskatoon. A 30-year-old father of three from Toronto. A minister from Vancouver. A clerk from Montreal. You’ve stood in this tunnel for hours with no room to lie or even sit down. Suddenly officers shout. The push of men, the dig of their rifles into your back and you are moving through the tunnel, forced from it like a fish down a stream, climbing the steps to the fresh air and small light above you, rifle clenched in your hands so hard your fingers are numb. Outside, it is snowing.

You’ve trained for this all winter, just one of 30,000 men who go over the top today, Easter Monday, but the intensity of the explosions all around you, the rattling of machine guns as you climb from your cave and onto open ground, facing mud and craters and strings of barbed wire, all of it laid out on a hill before you that you must climb, all of this incredible noise, turns your mind to a screaming blank. Men near you begin to fall, some dead before they hit the ground, others writhing in pain. But you can’t stop to help them. You must push up the hill.

The Canadian artillery officers have timed this attack down to the second, and they send a hail of shells just in front, a creeping barrage that offers you some cover from the German machine gunners. You and the men in your section walk behind this curtain of flame just quickly enough not to fall behind too far, just slowly enough not to be destroyed by your own artillery.

You, the young man from Saskatoon, you stumble over a dead Canadian in front of you right as a hail of fire knocks down the ones behind you. Crawling back onto your feet again, your only thought is of how lucky you are to have tripped when, that very second, the machine gun opens up again, and you stumble back, trying to make sense of what’s just happened. It feels like you’ve been whacked in the chest by a sledgehammer and now you are on your back, the snow falling onto your face, your ears ringing loud enough to block out the scream of the shells above you. Some of the ones who survived their wounds say they felt nothing, only a numbness when they were hit, but that’s not the case for you. You can feel with each heartbeat the blood pump out. You know what’s coming, do what you swore to yourself you’d never do. You cry out for your mother, for her embrace. But you won’t feel that again.

You, the 30-year-old from Toronto, a photo of your young family tucked safely in your tunic, you and your section have been given the task of taking an advance German trench, but you’ve lost the others in the smoke and the noise and the darkness that’s just beginning to lighten now. They must be ahead. You’ve been stumbling slowly up this incline, too slowly it seems. You begin to rush, the fear of losing the others the most frightening thought in the whole world. To be all alone out here makes you want to piss your pants. Your quick walk becomes a run, and you are screaming for your friends, never knowing you rush into your own barrage. A scream from above, but not enough time to recognize your mistake, to realize that you’ve gotten too far ahead, or to think of your children and your wife tucked safely in bed back home.

You, the minister from Vancouver, your job is simple. Console the wounded and perform last rites for the dying. You huddle in a crater with a group of dead. These ones around you might be sleeping they look so peaceful. No obvious wounds on their bodies, they lie back almost comfortably in the mud. A 5.9 German shell landed close by them as they tried to take cover in this hole, its immense blast concussing their bodies so violently that it turned their internal organs into instant jelly. Nothing for you to do here but bless each one and close some eyes. You climb out of the crater and walk upright like a human again, kneel to a young wounded one and ask him his name, if he wishes to be blessed. You don’t know, will never know, that a German sniper on the rise has spotted your movement, and as you raise your hand to the young man’s forehead, the crack of the rifle that kills you isn’t audible in the scream and roar.

And you, a clerk from Montreal, you and your section are some of the first to sweep into the German line, this confusing, snaking array of deep trenches and tunnels. You are one of the first Allies to stand on this ground, this hill held by the Germans for 2 1/2 years. But you’re not thinking of that. The hand-to-hand fighting is ferocious, the enemy surprised, wide-eyed like boys to see Canadians screaming and bayoneting and throwing Mills bombs and shooting up and down the alleys that, it is said, could never be taken. You, Montreal clerk, you are part of this snarling animal that the Germans have come to fear, and you take part in it, this killing that happens close enough and with your bare hands gripping a knobkerrie or a trench knife to see the eyes of those who don’t look much different than you. You look down the hill you’ve just climbed and see hundreds of Canadians, thousands coming to your aid. A German sergeant runs bellowing up behind you, smashes your head two-fisted with his club. You feel nothing except for what you think is the brush of your wife’s bare foot along your calf.

Droves and droves of us Canadians go over the top this morning. For almost 4,000, Easter Monday, 1917, is our last day on earth.

Nine decades later, nature has allowed us to forget what happened here. Almost. From below it, the ridge is a gentle-seeming rise of hardwood forest and verdant pasture. Sheep graze in and around the concave dips that dot the fields. Thousands of dips — old shell holes and craters filling in slowly with time. Walk with us up this rise that leads to the monument, walk with my friend Jim, my son, and me. We’ve come to trace Jim’s grandfather’s steps. We’ve come to try and teach my teenaged boy how history still lives. How it still breathes.

We stray off the maple-lined road that leads us to our little piece of Canada in France. We are immediately surrounded by new, lime-green forest, some of it growing out of old German support trenches. Moss blankets the ground. Birds call out. Jacob goes off exploring, and when he returns, he carries a piece of human bone, asking what it might be. We place it back where he found it. Look at my son, a blue-eyed teen toying with the idea of joining the military. Lots of dead soldiers his age, always his same age, lie here under our feet.

The walk uphill to the monument looks deceptively easy, but we’re all breathing hard. No 70-lb. packs on our shoulders today, no heavy rifles in our hands. No mud or dead bodies or barbed wire, no bullets or bombs going off around us.

The highest point of the ridge, Hill 145, holds the monument on its back. Open fields surround it, the earth still pummelled into waves by 90-year-old artillery. Figures carved from limestone, some shrouded in stone veils, circle two huge pillars etched with the names of our missing, our dead. Step up. Walk forward. Lean against the cool limestone. Your two hands just barely cover the names of four dead. Four lives imprinted on your palms.

That clerk from Montreal, he is the kid at the café who serves you coffee each morning. That minister from Vancouver, he’s the one you had over for dinner last Sunday who asked for seconds of the roast. That 30-year-old from Toronto, he’s your co-worker who keeps the pictures of his family on his desk. That young one from Saskatoon, he’s my son.

The Douai Plain stretches out beyond the monument. Listen now, carefully, as Jim explains: the Allied High Command didn’t expect the Canadians to take this ridge that day. Our action was simply a ruse for other major assaults to the south. But we took it. And there was no backup plan in the case of victory, so all we could do was hold our ground and watch the Germans run.

We continue to stare. Jim points down the plain. “That path there leads straight to Germany.”

“No, not a waste,” Jim says, scanning the same ground his grandfather walked. He bends to pick up a small stone as Jacob lopes towards the monument. I watch my son, his shape a contemporary sag of baggy clothes and lank blond hair, and he is so beautiful my breath catches in my chest. Jim is right. Jim is so very right.

Joseph Boyden is a Giller Prize-winning Canadian novelist and short-story writer whose third novel, The Orenda, won the 2014 edition of Canada Reads. He wrote this piece in 2007.