The enigmatic masterpieces of Vilhelm Hammershøi

A century ago, Vilhelm Hammershøi was a giant in the Scandinavian art world, his paintings avidly collected by connoisseurs and museums. It was the era of the Impressionists, yet, as Kasper Monrad, senior research curator at the National Gallery of Denmark (SMK) explains, his palette was radically different. “He used very few colours—grey, white and black—but many hues of these colours. In some paintings we’ve traced 20 hues of white. There are very few painters working in the same way as he did,” Monrad says.

“He has no peers in modern Danish art capable of matching him in terms of narrative restraint, spatial soberness and sophistication of colour,” states Mikkel Bogh, director of SMK. However, after his death from cancer in 1916 his works were soon forgotten—at least, outside Denmark.

Yet in recent decades, the artist, and his restrained, intimate style, are once again attracting throngs of devoted admirers. “After a century of abstract art,” says Monrad, “I think a lot of people appreciate that the pictures have subjects you can relate to.”

Until June 26, the Art Gallery of Ontario is home to Painting Tranquility: Masterworks by Vilhelm Hammershøi. The exhibition may be small—24 works from Copenhagen, a new AGO picture and a private loan—but it packs a punch, showcasing many of the best works from SMK. “If we’re going to do this, we’re going to send the best,” Monrad says. In a flitting, rushing era of instant answers, this exhibition quietly seduces viewers into doing the unusual: standing still, gazing deeply into one image and pondering what the artist is trying to portray. 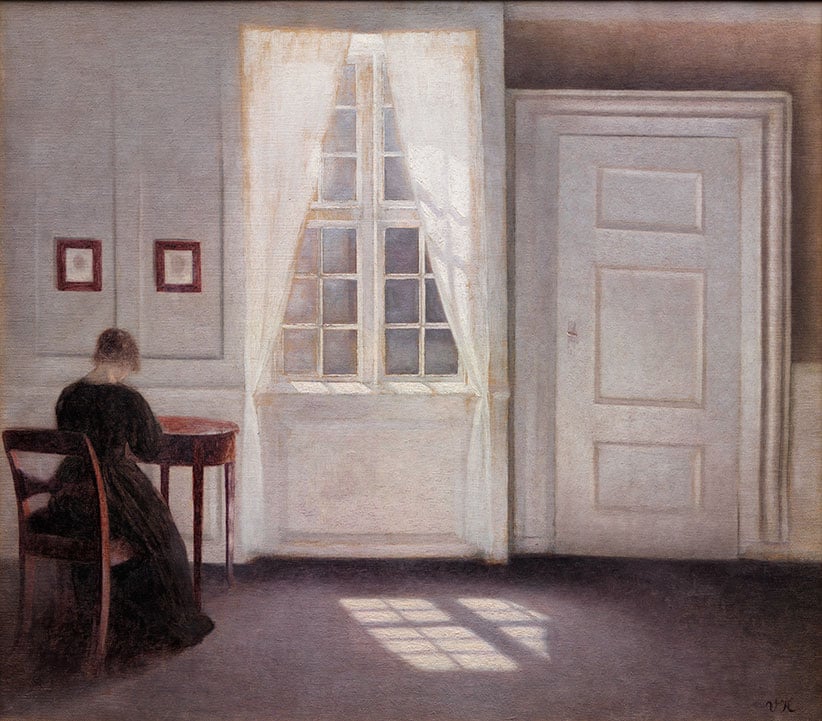 Hammershøi was always a lone wolf. In 1885, his art teacher said, “I have a pupil who paints most oddly. I do not understand him, but believe he is going to be important and do not try to influence him.” He limited his subject matter to interiors, portraits of his family and close friends, townscapes and landscapes. By stripping the scenes of any unnecessary details he abolished any sense of narrative from his work. In Interior in Strangade, sunlight on the floor (1901), the woman’s back is to the viewers. As Monrad explains: “We are not really sure what is going on. We don’t know what she’s doing. Is she absorbed in thought? Meditating? Writing a letter? Or is she feeling lonely or isolated? Or is she full of harmony? We don’t really know.”

That enigmatic quality permeates Hammershøi’s works. For The Buildings of the Asiatic Company (1902), he broke convention by leaving the most important part of the painting, the middle, completely blank. He’s left out the towers and buildings that would normally be seen in the background. Viewers are left with a void, and it’s up to them to fill in the space. Amalienborg Palace Square, Copenhagen (1896), like so many cityscapes, is devoid of people. The sky is grey and dense. 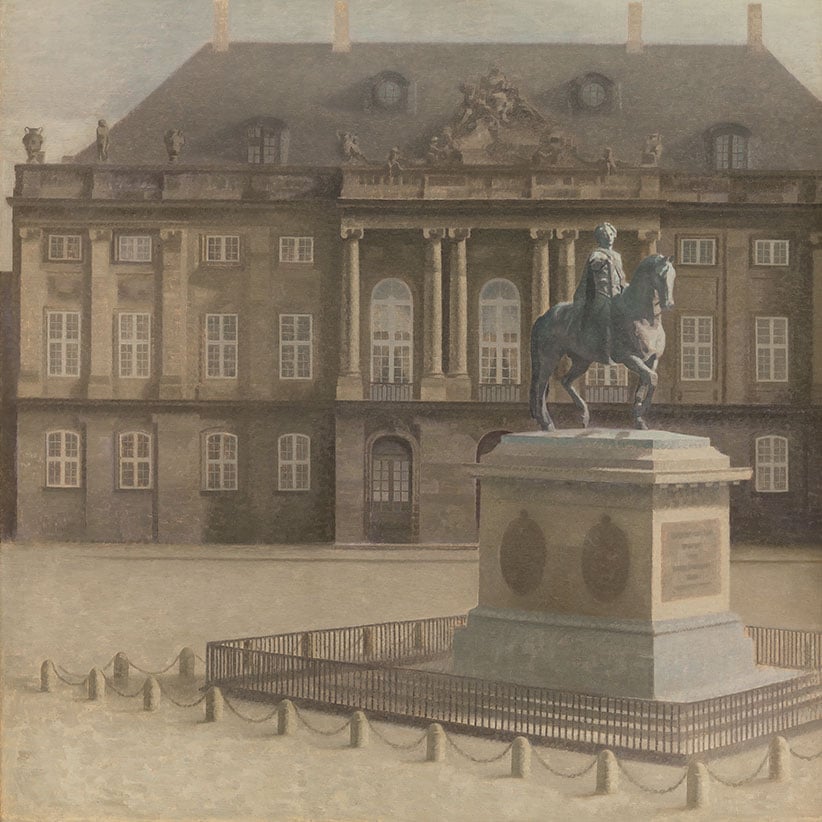 Now tourists flock to Denmark to explore Hammershøi’s world. According to Monrad, the Japanese are particularly enthralled with the artist. And his works, which now sell for millions, are gaining recognition around the world. Last year, Lloyd DeWitt, the former European art curator at the Art Gallery of Ontario purchased one of Hammershøi’s masterpieces, Interior With Four Etchings (1905). It was bought, in part, with funds raised by deaccessioning lesser works by European painters. (See our story on galleries quietly selling off permanent works, which includes a video of DeWitt talking about the Hammershøi.)

Interior With Four Etchings is a characteristically enigmatic and moody view of the painter’s wife, this time standing beside a desk. It has been seen only once by the public until now. After this exhibition, it goes on permanent display at the AGO. Currently, it’s the only publicly held Hammershøi in Canada.