The visual branding of the defence team is key to the trial. What Marie Henein's footwear tells us about gender, power and the optics of taking control 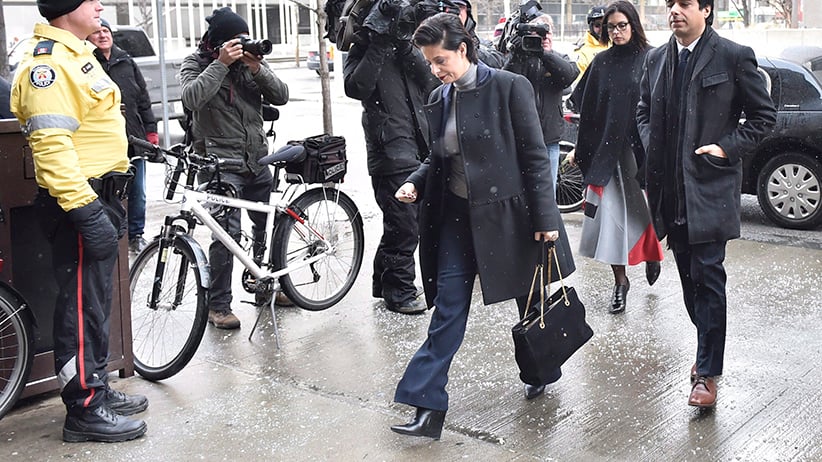 Jian Ghomeshi’s ongoing sexual assault trial has brought discussion of hand jobs veiled as “romantic encounters” and resulted in thousands experiencing disgust after googling “Dirty Sanchez,” a phrase arising in testimony. Yet one topic remains resolutely taboo when discussing the high-profile case: Marie Henein’s shoes. Mere mention of the defence lawyer’s glamorous, vertiginous footwear, a parade of Manolo Blahniks, Alaïas and Brian Atwoods, will reflexively get you branded as a sexist—as this writer discovered firsthand—followed by the comment that nobody is talking about Crown prosecutor Michael Callaghan’s black lace-ups, which is true. Henein herself complained in a Toronto Life profile that male lawyers aren’t cross-examined about their clothing; the story noted the “$1,500 leopard-patterned Louis Vuitton pumps” on her feet: “If I dress this way, it’s because it amuses me,” Henein said, redirecting the interview, as one would expect.

Of course, anyone on the stand throwing off that line during a bullet-fire Henein cross-examination would have been strafed. The notion that Henein wanders to her closet of exquisite clothing in the morning and says “What amuses me today?” is about as believable as her saying she decides what questions she’ll ask that day’s witness while travelling to court. Anyone who has watched Henein in action can see that her courtroom identity, clothing and footwear included—as well as that of her co-counsel and her client—is meticulously constructed. And if there’s anything that “amuses” Marie Henein, it’s to prevail.

The entire defence team, in fact, functions like one perfect glossy, raven-haired package attending a fashionable funeral. Henein’s co-defence counsel, Danielle Robitaille, has clearly undergone a makeover from her appearance in the pre-trial motions in 2015; her long, wavy, brown-and-blond-streaked hair is now fashioned into a sleek dark bob coordinated with both Ghomeshi and Henein. With the dark suits and the sculpted hair, the three look like siblings. In fact Ghomeshi would fit in perfectly with the portrait photographs of Henein’s associates commissioned by her firm and included in the Toronto Life profile. If Henein’s brand in and out of court is an almost frightening competence and power, Ghomeshi would appear to benefit from the tie-in.

Henein is clearly leading the trial. And her presence in the courtroom offers an instructive lesson in the optics of taking control. She defies the real-life sexist messaging given women—that they should take up as little space as possible (the Platonic female ideal being the impossible size 00), that they not control the conversation, and that they not have the last word. In court this past week, Henein has done all three. She has mastered not only occupying but owning space. She stomps across the floor ferrying new evidence, gathering her shoulders in a quarterback’s hunch that brings to mind late criminal defence lawyer Eddie Greenspan, Henein’s mentor and former associate. Here, high heels provide a five-inch advantage, bringing the lawyer eye to eye with Crown lawyer Michael Callaghan. Then there is her almost architectural hair offering another few inches of loft, reminiscent of the black crest of a red-whiskered bulbul.

Then, the shoes. Wearing high heels that cost $1,500—walking on a billable hour, in a sense—is part of Henein’s exclusive branding; Toronto Life noted Henein’s shoe collection is “so notorious that Ontario’s former chief justice Warren Winkler once ribbed her, ‘So are you going to buy a car or a new pair of shoes?’ ”

Their expense, of course,  telegraphs status and success, not unlike a very expensive suit on a man. But donning exquisitely crafted suede shoes in February—black and teal as well as patchwork grey, black and burgundy—as Henein has done throughout the Ghomeshi trial, sends an even more rarefied version of that message: “My feet are unacquainted with slushy pavement,” it says: “I have a driver.” But literally standing on a grand is only part of it. There’s a fierceness conveyed by Henein and Robitaille showing up to court in five-inch stilettos, a shoe style made possible by technology invented in the ’50s; it gave birth to the “killer heel,” able to support a human body on a thin, shiv-like base.

Henein is obviously not alone. “High heels are part of a developing uniform of authority worn by women,” says Elizabeth Semmelhack, senior curator of Toronto’s Bata Shoe Museum. Semmelhack agrees that discussing the costuming of female lawyers doing their job is problematic. It bristles with a double standard: “Women’s appearance becomes a focus of discussion in ways that seem distracting.” But as someone who deconstructs fashion’s meaning professionally, she knows it’s more complicated: “Women don’t have a uniform of authority that they can slip on and not have their attractiveness, sexuality, sexual appeal, or desirabilty commented on.” Court is intrinsically a formal place, says the author of Heights of Fashion: A History of the Elevated Shoe, which puts both men and women in the arena of suits and sleek, shiny shoes. Appropriate female footwear in the court was the cause of a contretemps in 2008 when the Memphis Bar Association met to discuss the threat posed by “toe cleavage” to the judicial process; it added “cocktail shoes” to athletic shoes and sandals as verboten courtroom footwear. Of course, Henein could elect to wear neutrals or pastels, and demure flats. She doesn’t.

Her choice of footwear evokes the nice symmetry between high heels in court and the first high heels, dating to 10th century Persia, where they were worn by male warriors. Heels provided anchorage in newly invented stirrups, allowing them to shoot a bow and arrow with greater accuracy. High heels, incidentally, migrated to Europe first as a fashion item for men; they were worn by women first in the early 1600s when women, among them Elizabeth I, masculinized their attire, Semmelhack explains. Over the following century, heel shape became more “gendered,” she says: “Men wore heavier, sturdier heels suggesting active engagement with the outside world; women’s heels became more tapered and physically destabilizing and spoke to the domestic realm.

In the professional realm today, it’s another matter. “If powerful women across the board begin to wear high heels, the high heel becomes associated with power,” Semmelhack says.  Anyone who watches The Good Wife, of course, already knows that. But any “power” confirmed by high heels remains as precarious as they are, she says.  There’s a shelf-life you don’t see with men’s power clothing, she says: “We’re happy to have a three-piece suit on a three-year-old ring bearer at a wedding, just as we’re happy to have a three-piece suit on a Bay Street banker and on a widower in his 90s burying his wife.” High heels don’t have the same flexibility: “If you put a pair of power heels on a four-year-old flower girl, there’s something uncomfortable about that, just as there is putting them on a widow burying her husband in her 90s.” And that’s a problem, Semmelhack says: “If I can only have access to an accessory of power between ages 18 and 35, what what does that mean for the longevity of women’s power?”

Somehow that’s not a problem one sees Marie Henein facing. If and when she decides to step down from her high heels, she’ll be sitting on the bench.