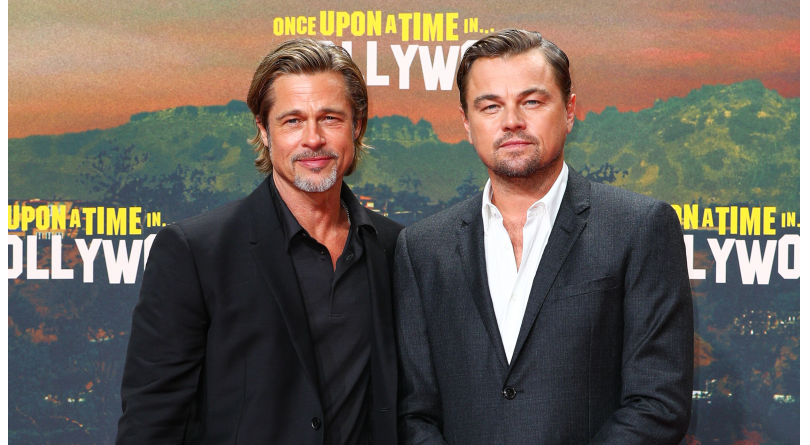 Brad Pitt and Leonardo DiCaprio attend the premiere of "Once Upon A Time... In Hollywood" at CineStar on Aug. 01, 2019 in Berlin, Germany. (Brian Dowling/Sony Pictures/Getty)

A homicidal clown, a Mafia hit man, a washed-up actor, a First World War soldier, a 10-year-old Nazi, and a family staging a quietly subversive home invasion.  Those are the protagonists driving Hollywood’s annual Grand Prix in the half dozen leading contenders for Best Picture in the Oscar nominations announced Jan. 13—Joker, The Irishman, Once Upon a Time . . . in Hollywood, 1917, Jojo Rabbit and Parasite. With exception of the Korean ensemble in Parasite, all those protagonists are white males directed by white males in period pieces saturated with nostalgia. In other words, Hollywood woke up this morning to discover that it’s nowhere near as woke as it likes to think it is.

With its depressive drama of a nihilist villain driven to revenge by mental illness and bullying, Todd Phillips’ Joker leads the pack with 11 nominations. Right behind it are Martin Scorsese’s mob epic, The Irishman, and Quentin Tarantino’s love-letter to vintage showbiz, Once Upon a Time . . . in Hollywood, tied at 10 nominations apiece.  The other Best Picture nominees— Marriage Story, Ford v Ferrari and Little Women. Along with Jo Jo Rabbit, they are all shut out of the smaller Best Director race, and not considered not heavyweight contenders. With leads Matt Damon and Christian Bale snubbed in the acting categories, Ford v Ferrari will get lost in the dust. But as Oscar voters look for some uplifting sentiment, and a female sensibility, amid the overwhelming darkness of the field, both JoJo Rabbit and Little Women have a shot at Best Picture.

While each member of the Academy’s 7,000-strong pool of eligible voters may fill out the ballot with most virtuous intentions, they end up finger-painting the zeitgeist in more grisly terms than any of them might have calculated. And this year’s results offer a composite portrait of Hollywood culture that confirms some of the industry’s worst fears about itself, and its most deeply embedded stereotypes. Here are some of the more striking trends to emerge:

MORE: Melissa McCarthy should win an Oscar for all of the reasons she won’t

Nostalgia is not as sweet as it used to be

From Joker to Judy, and Scorsese to Tarantino, the contest is rife with bittersweet feats of reminiscence, especially the showbiz kind. Joker, a comic book movie that’s not comic, or even remotely cheerful, Joker sits face-up on top of the deck as a smirking antidote to the shiny hegemony of Disney’s Marvel Universe. Set in 1981, the only thing Joker seems nostalgic about is cinema itself. As the tale of an avenging showbiz wannabe who discovers his dark side in the mirror, it’s an unabashed homage to Scorsese’s Taxi Driver (1976) and The King of Comedy (1982). And Scorsese, who has famously dismissed Marvel movies as theme park rides that are not cinema, looms over this Oscar field as its ultimate godfather. His Irishman, which Robert De Niro’s hitman narrates from a nursing home, is a three-and-a-half hour sitz bath of nostalgia for a genre that Scorsese has made his own. With a far slower tempo than his previous gangster pictures, which burn with a cocaine-like intensity, this three-and-half-hour epic is a slow boat to the past with a Proustian eye for detail and a coda of zen-like resignation—“It is what it is.”  Its anti-hero, De Niro is so damn self-effacing he didn’t even score a Best Actor nomination. And if Scorsese is the melancholy king of Hollywood nostalgia, Quentin Tarantino is its wise-guy crown prince, the Joker personified. His Once Upon a Time . . .  in Hollywood is a conjuring trick that summons up a lost world of ’60s showbiz and rewrites history in the process. Cast as an alcoholic has-been actor, Leonardo di Caprio can’t compete with Joker’s Joaquin Phoenix for Best Actor. But as the stunt man who owns every scene he plays in Tarantino’s movie, Brad Pitt proves he’s the kind of movie star who can really act that they don’t make any more—and he’s expected to win Best Supporting Actor. Meanwhile, you know that nostalgia is in trouble when the sweetest period piece of all is a Holocaust film, JoJo Rabbit, and that Rene Zellwegger will likely win Best Actress as Judy Garland making an alcoholic comeback en route to an early grave in an otherwise forgettable movie.

#OscarsSoWhite again, too little women and the injustice of all those snubs

With only one actor of colour (Harriet’s Cynthia Erivo) among all 20 nominees in the lead and supporting categories, the tastes of the Academy are going to come under some severe scrutiny before the Oscars are handed out Feb. 9. Worthy contenders of colour who were snubbed include Eddie Murphy, making a stellar comeback as a blaxsploitation pioneer in Dolemite is My Name; Lupita N’Ongo, a critics’ favourite for her shape-shifting turn in Us; and Awkwafina, the Golden-Globe winning star of The Farewell; and Jennifer Lopez, touted as a contender for her chutzpa as a stripper/con artist in Hustlers. And while Erivo was recognized for playing abolitionist heroine Harriet Tubman, Just Mercy’s saga of a historic civil-rights case was neglected, along with stars Michael B. Jordan and Jamie Foxx. Meanwhile, outside of the actress categories, women are almost entirely missing in action—most notably in the failure to nominate Little Women director Greta Gerwig.

In this context, the two names we expect to be routinely nominated—De Niro and Meryl Streep (Laundromat)—should not feel too slighted at being left off the list. And they’re in good company. Adam Sandler’s excoriating performance as a jewel dealer in Uncut Gems topped critics polls but left the Academy stone cold. Apollo 11’s eye-popping chronicle of the moon landing mission was frozen out of the documentary field. And “Spirit,” Beyonce’s song from Frozen 2, was snubbed, along with the movie.

The gender divide has never been greater

While we’re looking at retro trends, segregating men and women onscreen—into guy movies and girl movies—seems increasing prevalent, especially in the prestige fare anointed by the Academy. Five of the 9 Best Picture candidates are almost exclusively populated by men—Joker, The Irishman, 1917, Ford v Ferrari and Once Upon a Time . . . in Hollywood. Among the rest, Marriage Story makes the most concerted effort to achieve equal time, and empathy, for its duelling male and female protagonists (nominees Adam Driver and Scarlett Johansson). But as an indication of how sensitive this issue has become, a debate is raging as to whether Noah Baumbach’s divorce drama is more sympathetic to its hero or its heroine. And the fact that the verdict remains unclear is a testament to its strength, and its singular status among the nominees as a movie where dialogue rules and everything comes down to the emotional chemistry between and a man and a woman.

World cinema pokes its head out of the foreign language ghetto

When Parasite director Bong Joon-ho won the Golden Globe for foreign-language fare, he tempered his gratitude with a sly reprimand/tip: “Once you overcome the one-inch tall barrier of subtitles, you will be introduced to so many more amazing films.” This year the Academy revised its cultural optics by renaming the longstanding Foreign Language Film category to what’s now called Best International Feature Film. And Bong becomes the first South Korean director ever nominated for an Oscar. His genre-bending fable of class conflict—about a basement-dwelling family that quietly plots to take over a bourgeois household—erupted from Cannes in May, winning the Palme D’Or. It went on to become a hit with critics and at the box-office. Like Alfonso Cuaron’s Roma last year, it crawled out of the Oscars’ foreign-film basement to score nominations in four other categories—Best Picture, Director, Screenplay, and Production Design. But it’s still the only international feature to migrate from a category that remains a foreign-language ghetto, despite the new title. Pain and Glory’s Antonio Banderas was the only non-English speaker who broke the language barrier, winning a Best Actor spot for his uncanny mutation into director Pedro Almodóvar’s avatar). Between the subtitled dialogue and an ensemble of faces Americans wouldn’t recognize, it was perhaps inevitable that Parasite’s actors would be ignored. Like Roma, however, the film stands as serious contender for Best Picture. And Bong can proudly say he did it all without Netflix, which bankrolled Okja, his previous film.

Having disrupted television with mammoth budgets, major stars and pedigree film directors, Netflix swaggered onto the Oscar stage last year with Roma. This year, it zoomed into the lead with 24 nominations, more than any studio, as the Disney empire came a close second with 23. That pretty well sums up the gladiatorial showdown between the old Hollywood studios and the new streaming giants.  And it’s hard to ignore the perverse paradox of Netflix’s triumph. A  platform devoted to bypassing theatrical cinema and focusing the planet’s eyeballs on their digital devices has empowered directors like Cuaron and Scorsese to create pictures so theatrical in scale and tempo that it’s almost an injustice not to see them on the big screen. Because Netflix doesn’t have to fret about a film’s tempo or running time or opening-weekend box office, it has allowed auteurs to indulge themselves as never before. With the marathon length of The Irishman, binge-watching takes on a whole new meaning—it’s like devouring a mini-series in one gulp.

Aside from The Irishman, Netflix scored six nominations for Marriage Story, three for The Two Popes, and in the most surprising coup of all, earned two animated feature nominations (I Lost My Body, Klaus), overtaking Disney, which has just one, for Toy Story 4.

Netflix’s new status as the apple of Oscar’s eye can only diminish, as other platforms and the studios and carve out their own streaming real estate. Meanwhile three venerable Hollywood studios restored some glory with lavishly awarded spectacles—Warner Bros (Joker), Sony (Once Upon a Time . . . in Hollywood) and Universal (2019).  Caught in the squeeze in this clash of the titans are the gems of independent and “foreign” filmmaking, which have an increasingly difficult time getting noticed at America’s world championship of cinema. And as the action plays out at the Oscars, amid an election and a culture war, the title of Tarantino’s Once Upon a Time could not be more apt. It’s High Noon in Hollywood.