The Group of Seven come home

McMichael celebrates the return of Canada's most celebrated landscape painters

Twenty-two years ago when Katerina Atanassova left Bulgaria to study medieval art at the University of Toronto, she had never heard of the Group of Seven. The last thing she imagined is that she would rise to the top rank of this country’s art professionals as chief curator at the McMichael, a gallery in Kleinburg, Ont. that houses a one-of-a-kind Canadian art collection, and play a key role in an elaborate three-year-long operation to galvanize support for historical Canadian art—one whose final component she will unveil next week.

When Painting Canada: Tom Thomson and the Group of Seven opens  November 3 at the McMichael, the final stop of a four-museum tour, including London and Oslo, Atanassova hopes to see history repeat itself. Her plan is based on an experience of the Group of Seven’s, back in the early twenties. Then, the newly formed school of landscape painters, had little appeal in conservative Toronto says Atanassova. “Their colours were too sharp and people found their style too bold, too expressive, even aggressive.”

Things changed when the painters went abroad and showed their work at a prestigious exhibition in Wembley, England from 1924-25. Their art, hung alongside works by internationally prominent painters, was celebrated with great fanfare. When the group returned home, they were welcomed as heroes. “It was almost like they needed that recognition abroad first so that we could recognize them in Canada,” says Atanassova.

Although today the Group of Seven is famous, interest in their painting is not as popular as it once was. It has become more fashionable to view the work of such domestic artists as Jeff Wall and Shary Boyle than Lawren Harris and Tom Thomson. For Atanassova this is regrettable. “You go to France and everyone knows the Impressionists. Here we don’t know our great painters the same way.”

Atanassova became the unlikely torchbearer for this country’s historical art when she fell in love with the Group of Seven while working as an assistant curator at the University of Toronto Art Centre gallery. The Sofia-born and raised scholar was hired to take care of its medieval collection, but ended up giving tours of historical Canadian paintings because that’s what comprises the gallery’s main holdings. In 1999, when Markham’s Varley Gallery (which preserves Group of Seven member Frederick Horsman Varley’s legacy) was looking for a director of education, it hired Atanassova.

For her, it was a logical leap to make the switch from being a medievalist to a Group of Seven expert. “There is a great deal of spirituality in early twentieth century Canadian art,” she says. “Varley was very influenced by Buddhism, and many of Lawren Harris’s paintings are based on theosophic principles.”

Not long after Atanassova joined the McMichael she became part of an initiative in 2009 led by the Thomson family—this country’s largest supporter of Canadian historical art—to revisit Wembley, the only major exhibition of the Group of Seven abroad. Along with York University-based Canadian art historian Anna Hudson and Ian Dejardins at London’s Dulwich Gallery, Atanassova began curating Painting Canada, featuring over 125 works.

Although stops for the exhibition included three European venues—the Dulwich Gallery (where it opened in October 2012) followed by Holland’s Groninger Museum and Norway’s National Museum of Art, Architecture and Design in Oslo—plans were never made for a Canadian showing of the paintings. “The problem comes from the complexity of loans,” says Atanassova. “It’s usual for an exhibition to have only three stops because institutions and collectors rarely want to part with their masterpieces for any longer.”

Things changed when Europeans demonstrated an overwhelming response to Painting Canada. In London 41,000 visitors came to see the Dulwich show. The Royal Family was so impressed with the exhibition that the Prince and Princess Michael of Kent requested Atanassova take them on a private tour of it. In the Netherlands enthusiasm for the exhibition was equally intense: over 50,000 viewers took in what Atanassova describes as a summary of “what Canada is about.”

Overwhelmed by the enormity of the show’s success, its creators agreed to extend the loans of its painting to give it a Canadian homecoming. The McMichael, situated in the same landscape that inspired the Group of Seven–and where six of the painters are buried on the property–was the logical venue to play host.

But the show will have several features never shown in its previous stops. Atanassova’s curation emphasizes the relationship between the historic Wembley exhibition over 80 years ago and the Group of Seven’s most recent European showings by including press and archival images that juxtapose accounts of the 2011 European reception of the Group of Seven with their 1924-25 British visit.

Atanassova has also added previously unexhibited works to the McMichael presentation of Painting Canada. “The Group of Seven and Tom Thomson were known for their sketches,” says Atanassova. “But since they are mainly in private collections, it’s rare to see a sketch and canvas side by side. This is a once-in-a lifetime opportunity to see these works together.” Atanassova has also put on display paintings not shown in Europe as well as a range of personal artifacts and belongings from the Group of Seven on show, including paint-boxes, brushes, magazines, letters and diaries.

According to Atanassova, she feels pressure to make Canadians realize how much they owe to the Group of Seven. “Like the Impressionists, they broke the mold and revolutionized what it meant to paint,” she says. “They were models of how to conduct your life and to be different. It’s a model now woven into my psyche, into my vision of Canada.” 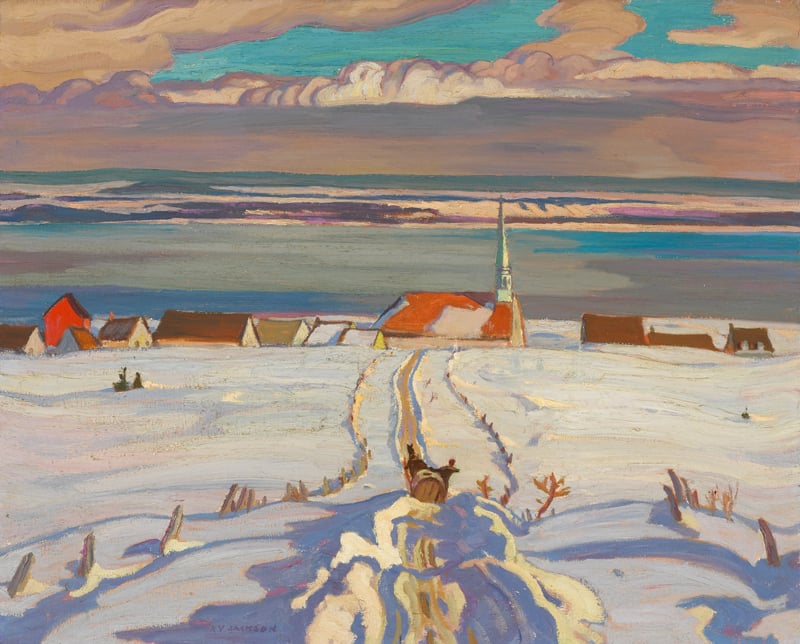