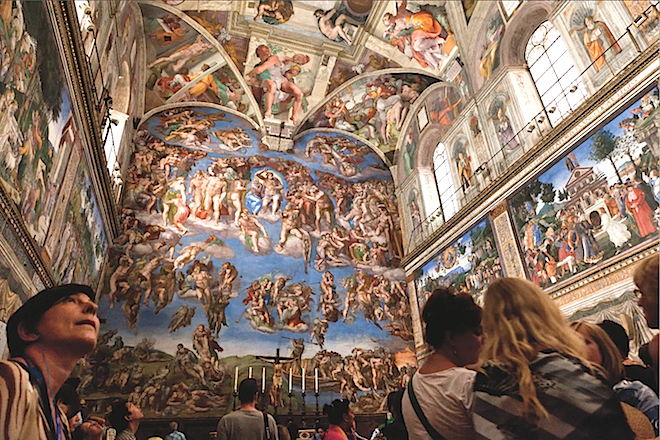 Every day, some 20,000 tourists are corralled like cattle through the hallowed halls of the Vatican palace. Most breeze past artifacts that collectively form what is the most impressive collection of Western art in the world to reach the main attraction: the Sistine Chapel, whose 40-m-long vaulted ceiling Michelangelo, along with five assistants, toiled from 1508 to 1512 to paint. Once visitors squeeze through a set of wooden doors, they crane their necks and gaze 21 m up. No photos are allowed—and there is no talking, which apathetic guards enforce by way of bellowing, “Silenzio!”

For the 115 cardinals who gathered over two days in March to elect the 266th pope, though, the experience was decidedly different. They didn’t enter as the public does from the right of the altar, but from the original entrance, at the back of the papal chapel, which was finished in 1481 under Pope Sixtus IV’s watch. What’s more, this group had the splendid space—doors locked and the 12 windows sealed—all to themselves. Over the course of two days, they must have paused to cast not just their ballots but their eyes around the room. Did they overlook, as most tourists do, the series of wall frescoes painted by Renaissance artists such as Botticelli and Ghirlandaio, who taught Michelangelo to paint when he was just 13? Did they take notice of the 28 portraits of the first popes just above those and consider the weight of history? Maybe. But cardinals are, after all, human, and their gaze must have gravitated to the ceiling that stands as one of the most enduring pieces of art ever created: nine panels depicting scenes from the Book of Genesis set out in an elaborate architectural framework complete with prophets, sibyls, the ancestors of Christ and nameless nude figures.

As they walked toward the altar, they might have thought it was like walking backwards through time, from the days of Noah to Creation itself, or considered the Neoplatonic allegories in the panels, the homoerotic undertones. They might have stopped directly underneath The Creation of Adam, that image that—despite being parodied and reproduced on everything from coasters to posters—still has the power, regardless of the viewer’s belief, to strike deep. In front of the altar where they dropped their ballots into the silver and gilded bronze urn, they would have come face to face with The Last Judgment—the closing of a circle not only for Michelangelo, who 22 years after finishing the ceiling was summoned back to paint the altar wall, but also for anyone standing there: above is the panel of God separating light from darkness on Day One, and in front, the end of it all.

Did they have time to ponder the oddities? Wingless angels; a race of nude men who resemble Titans; the young Christ who looks more like the Greek god Apollo than the middle-aged bearded Saviour. Or perhaps they gave in to the urge to fall to their knees, as Paul III, the first pope to see the completed fresco, supposedly did. “Lord,” he importuned his heavenly father, “Do not charge me with my sins when you come on the day of Judgment.”

Take a tour of the chapel with author Jessica Allen: