The king of mangoes 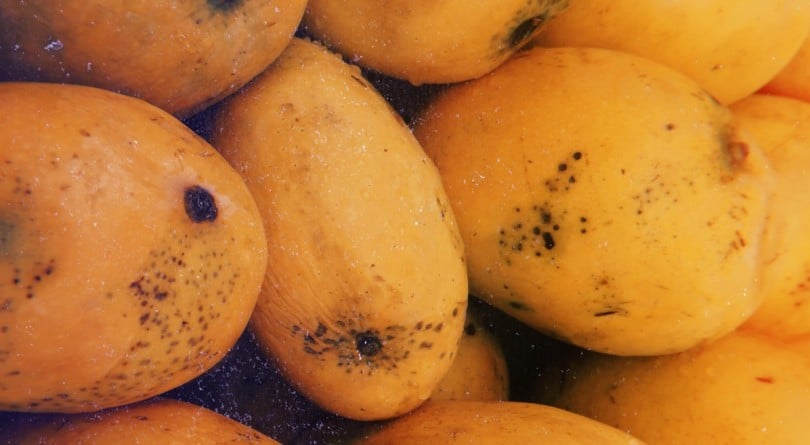 To the uninitiated, the names perhaps sound like islands on the far side of the globe: Aapoos, Mulgoa, Langra. But to those in the know, those words conjure indescribable gastronomical delights. For them, a mango is never just a mango, and it is certainly not that hard, fibrous abomination with the blushing skin that is unceremoniously dumped on North American grocery store shelves, year in and year out. That variety, more likely than not the Tommy Atkins or one of its relatives, is one of the most common cultivars in North America. But a thousand others exist in India, each with a particular provenance, each inspiring cultish devotion. For some, nothing beats the Neduchalai of the south, a mango so lush, with such a small seed, it scents the whole house. Others swear by the curvaceous, powerfully succulent Banganapalli, or the graceful Dussehri. But no mango can claim more passionate devotees, especially outside the subcontinent, than the small, fat golden mango called the Alphonso.

In spring, when a gourmand’s fancy has barely turned to thoughts of asparagus, the Alphonso aficionados start popping up on foodie sites like Chowhound. They want to know, in Montreal, Vancouver, San Francisco and London: “Are they here yet?” One query two weeks ago about whether the season had started (it has) sparked more than 100 passionate responses. Its author, a Torontonian, admitted to polishing off eight cases of the mangoes last year.

The “king of mangoes” requires a commitment: it’s only sold by the case here—$23 to $25 for a dozen. Many people buy more than one, according to Sadroo Dharamsi. A transplanted Tanzanian, he owns an Indian grocery store in Toronto called Sadroo’s. (You can tell he’s in when his pristine white 1969 Rolls-Royce with the licence plate “Msala 2” is parked out front.) He says one customer recently bought 12 cases in one go—144 mangoes straight off the plane from Bombay, nestled in their beds of recycled paper strips. Most of his clientele is Indian, but converts come too. In early April, before volcanic ash played havoc with shipments and appetites, a woman was in buying a crate to try. She said she is of Chinese background and usually buys Thai mangoes, but she’d been hearing so much about Alphonsos from her Indian friends she had to taste them for herself.

What’s all the fuss about? If a mango is what a peach aspires to be, as Jules Janick, a professor of horticulture at Purdue University, says, then the Alphonso—not to be confused with the longer, flatter Ataulfo, from Mexico—is perhaps the pinnacle of that ambition, an unassuming, dull-looking mango from western India, yellow-skinned, like all but four of India’s major varieties, with a glorious, saffron-coloured flesh. It is moist and buttery in texture, never stringy, and almost obscenely juicy. Its taste is rich, implausibly sweet, with just a hint of acidity. The fanatic, intent on getting every last morsel, will suck on the large stone (the seed is contained within), letting the juices dribble where they may, and perhaps even on the peel, which is surprisingly fragrant.

The British actor Terence Stamp confessed he eats them in the bath—“you can’t enjoy the Alphonso without getting just a little messy,” he wrote in The Spectator magazine. Erika Oliveira, a Canadian who was art director of the late lamented Gourmet, has childhood memories of tossing flip-flops at low-hanging fruit on the 60-foot trees in Bombay (now Mumbai). As an adult she’d fill the fridge in her apartment with nothing but mangoes. “We’d eat five, six, seven a day,” she said. “Alphonsos were my favourite.” And Vikram Vij, who owns the legendary Vancouver restaurant Vij’s, is “a huge fan.” Growing up in Bombay and Delhi, he was inducted into mango culture by his father, who was uncompromising when it came to mangoes: he’d buy them semi-ripe, by the caseload, then wrap each fruit individually in newspaper to ripen it, turning it carefully now and then, as one might a fine champagne, recalled Vij. (Perhaps inspired by that education and the “mango parties” of his youth, Vij now serves several mango-inflected dishes, such as a green mango curry using semi-ripe mango.)

Connoisseurs of the Indian mango can claim some authority; the fruit originated there more than 4,000 years ago, and India is still the world’s top producer. The reason there are so many varieties, explains professor Jonathan Crane, a tropical fruit crop specialist at the University of Florida, is that the Indian mango—the other major “race” of the fruit is the Philippines mango—has been lovingly cultivated for a thousand years, with seedlings often made to bond with stems of beloved neighbourhood trees in hopes of recapturing the taste of one particular fruit. (In the genealogical roulette of propagation, a mango seed will not necessarily produce fruit, or the same kind of fruit that its parent did.) Often, these new hybrids got their own names.

America has had its own flirtation with the mango: early converts brought in seedlings from Asia, and Florida at one time had 7,000 acres of mango groves, wrote the late Julia Morton, a professor at the University of Florida. But in the 1950s postwar boom, many of the groves were scrapped to make way for housing developments, whose nostalgic names—Mango Terrace, Mango Heights—didn’t do much to establish the fruit. One hardy survivor from those early efforts remains: the Haden mango, the rather unexpected descendant of a mysterious seedling, possibly a Mulgoa, shipped to the U.S. from Bombay more than 100 years ago. According to Crane, it’s one of the tastier Florida varieties, along with the Edward, his personal favourite.

In India, Alphonso season is brief—from April until June, or when the monsoons arrive. And the finicky Alphonso, also called Aapoos, is a shy fruit bearer, unlike some cultivars. (One hard-working tree of the Pane Ka Aam variety is known to have borne 29,000 mangoes in one very good season.) That’s in part why mangoes like the Alphonso are a harder sell commercially in North America, where attractiveness, durability and yield may matter more than taste. It’s the reason the Red Delicious apple was the most popular apple for decades. “Ubiquitous and mediocre, a gorgeous fraud,” the journalist Bill Gifford has called it. Dozens of more flavourful apples exist, from Spy to GoldRush, a variety developed by Jules Janick, and yet the Red Delicious prevailed, with its handsome colour and skin the thickness of a vinyl tablecloth. (Recently its popularity has declined, as consumers have become more discerning about the taste of their apples.) Indeed, the Delicious itself didn’t begin life half as red or as showy; it was selected to be prettier. “I don’t know why our consumers seem to like big fruit,” says Janick. “Who wants to eat half a pound of apple?”

We do, apparently. Likewise, there are some splendid Mexican and Brazilian mangoes, but the varieties we import tend to be larger, hardier, and more photogenic. This market also values consistency—popular mangoes like the Kent and the Keitt are uniform one-pounders, says Jayasankar Subramanian (no relation to this writer), an associate professor at the University of Guelph. But in places like India, where shiny, stickered fruit have only recently made their debut at Western-style supermarkets, consumers are unfazed by produce with blemishes or other eccentricities, including economic ones. “They wouldn’t touch a Tommy Atkins,” says Crane. “Fruit quality is valued so highly they will grow the Alphonso even if the yield is low.”

Sadly for Americans, the Alphonso one buys there is but a shadow of its true self. Subramanian explains that in an effort to keep out the mango weevil, Asian mangoes undergo a strict treatment before arriving in the U.S.: they are quarantined, then dipped in 50° C water for 10 minutes or so. But Canada’s climate (and obvious lack of mango trees) makes tropical pests much less of a worry. So we get a version closer to that fruit grown in Ratnagiri and Devgad and stacked in pyramids on carts in Bombay and Delhi—and we get it as much as $20 cheaper.

The open-minded mangophile can keep himself in mangoes from March until August: after Alphonso comes the extra sweet Kesar, then Totapuri, Dussehri, Sindhri, and the Pakistani Chonsa, which some say is finer than the Alphonso.
For those who aren’t wedded to Indian mangoes, said Arfan Amani, an Afghan clerk at the India Cash and Carry in Toronto’s Little India, the Ataulfos do very nicely. They’re juicy and sweet—but not too sweet for the Western palate, which prefers a tarter flavour—and at six for $5, a bargain. Sadroo himself is no great champion of the Alphonso.

“They’re good,” he said laconically. “But some of the Mexican mangoes are very nice, too.” Subramanian demurred.

“The mango doesn’t taste quite as good here,” he admitted. “It’s flat. It doesn’t have half the aroma it has in India. You have to stick your nose in it to even smell it,” he said. “But I’ll take even a flat Alphonso over a great Ataulfo any day.”