'She doesn't want people to know she did the record'

The 12 new songs on Metals are not be the most sought-after item for subjects of Canada’s undisputed indie rock queen, however.

If the resellers at Amazon.com are any indication, that distinction goes to Monarch (Lay Your Jewelled Head Down), Leslie Feist’s first album, which she released in 1999. At the moment of writing this, there exist five copies available for purchase from used CD vendors at prices ranging from $79.99 to $231.08. 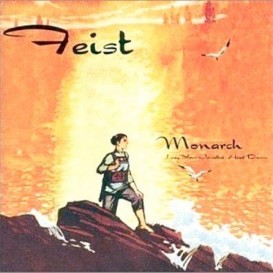 Most people don’t know Monarch exists. It’s not on iTunes and you can’t buy it in stores. And because of its limited pressing, it’s not exactly filling up used bins like old Treble Charger and Moist CDs, either. Feist isn’t really helping change that perception.

“She doesn’t want people to know she did the record,” says Chris Burland, one of the partners in the defunct indie label Bobby Dazzler Records, which printed and sold 500 copies of Monarch in 2000 to supplement sales Feist made “off the stage” at solo shows.

“I’m not sure when it was, but it was long before the second record [Let It Die, 2004] came out. There was some interest from [record distributor] Outside Music and they said they had 800-900 back orders on it, so I went to Leslie and she refused to allow me to print any more. She said, ‘No I don’t want it done any more.’

“It was as if that record didn’t exist in her mind.”

Feist never plays songs from the album live and, in a move that’s quite at odds with the mandate of her present label Arts & Crafts, who are bullish on re-releasing the back catalogues of their artists, Monarch remains out of print. Which is all quite strange because unlike Alanis Morissette’s early teenie-bop dance career, or footage of J.D. Roberts when he used to work at MuchMusic in the ’80s, there’s nothing about Monarch that’s embarrassing, weird or a blot on Feist’s name.

Monarch is actually quite good.

There’s a clear lineal connection between the 10 songs on Monarch and Feist’s other three albums Let It Die, The Reminder, and Metals.

The charming aw-isn’t-that-sweet sentiment of lead track “It’s Cool To Love Your Family” is definingly Feist, bravely and completely out of step with the cynicism and irony that would come to characterize indie rock throughout the next decade. “The Onliest” and “Still True” feature gymnastic vocal performances on par with anything in her later catalogue. “Flight #303” feels like a first flirt with the shimmying grooves that would come into focus on Let It Die‘s “Mushaboom” and The Reminder‘s “My Moon My Man.” “One Year A.D.,” meanwhile, might be the hardest-rocking song Feist has ever recorded, perfectly triangulating her work with Broken Social Scene and By Divine Right.

Recorded in Toronto and mixed at Hamilton’s Catherine North Studio, it could also be fairly argued the barn-raising build of Monarch set the blueprint for Broken Social Scene, who’s first album Feel Good Lost wouldn’t appear on the musical horizon until two years later, in 2001.

Dan Kurtz, then of dance-jam band The New Deal and now member of Dragonette, produced and played bass on the album. Fellow New Dealer Jamie Shields manned keys, studio vet Josh Hicks was on drums, and Leslie brought vocals and guitar. It’s the guest turns that make you realize there was something special afoot, though.

Among others, former Rheostatic Martin Tielli played on “La Sirena” and “The Mast,” along with being credited in the liner notes as “chain-smoking in a tiny bedroom with his suit jacket on in the middle of July.” Jose Contreras of By Divine Right—the band that would’ve been Feist’s main gig at the time alongside future BSSer Brendan Canning—plays on “Flight #303.” Son’s Simon Craig and Jason Beck, who’d become more well-known via his alter-ego as the rapping classical pianist Chilly Gonzales, are on “That’s What I Say, it’s Not What I Mean” and “Still True,” respectively.

Peaches, who would’ve been Feist’s roommate at the time, gets a shout out in the liner notes. So does Royal City, a band that, poised for greatness, would sign with The Smiths’ old label Rough Trade before dissolving rather unceremoniously when singer Aaron Riches found God. Tyler Clarke Burke, who at the time was one-half of influential Guelph label, Three Gut Records, is also thanked. She’s the one doing the fainting in the “It’s Cool To Love Your Family” video.

So if the cast of contributors and supporters was quality, and the songs were good, why is Monarch dead to Feist?

Perhaps Feist’s reluctance lies in the subject matter on Monarch.

At the time Feist would have been dating Andrew Whiteman of Apostle Of Hustle/Broken Social Scene fame. There are some wonderful love songs on the album, particularly “Still True” and “The Mast,” but the timing may not be right to confirm those songs were about him. Or the songs may not have been about romantic love at all.

Dig deeper and you’ll find real melancholy. There’s a ghostly sense of loss in “One Year A.D.” and “The Onliest” could well be the anchor ballad to an Irish wake.

“Flight #303” and the album’s last song, “New Torch (You Are),” both speak of travel and journeys, with Feist pleading by its end, “Take a trip into the sky with me/fly with me.”

What they all mean isn’t clear, though it’s easy to let one’s imagination fill in the biographical holes.

There remains an unfulfilled narrative about Monarch. There’s something about this album that Leslie Feist, our Feist—the one that so endearingly flubs songs live at the Junos, the one that makes everybody dance in iPod commercials—can’t bear. It’s why people can charge $230 for a copy of this album, and as wrong as it may be, it’s also part of Monarch‘s magnetic pull.

FILED UNDER: Feist Lay Your Jewelled Head Down metals monarch