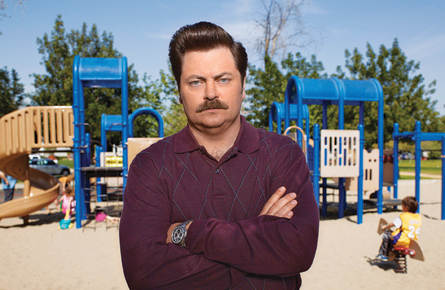 That 70's look: The actor who plays Swanson says he has hair that looks like 'he rolls out of bed and runs a comb through it once' (Mitchel Hasseth/NBC)

If you want a sympathetic look at the anti-government sentiment sweeping the world, don’t watch cable news: watch Ron Swanson, the libertarian, government-hating bureaucrat on Parks and Recreation. The comedy, whose third season started last week on Citytv, is about a small-town parks department, and one of the running gags is that Ron, its director, doesn’t believe the department should exist. Nick Offerman, who plays the character, describes him to Maclean’s as a man who “would like to see as little governmental influence as possible in daily life.” Most government-haters on TV are portrayed as militia fanatics like Dale Gribble on King of the Hill (from the co-creator of Parks), but Ron is something new: a likeable guy who tells schoolchildren that “capitalism is God’s way of telling who is smart from who is poor.”

Not that Ron is intended to be a mostly political figure, even when he’s unveiling his libertarian ideals in the form of a “Swanson pyramid of greatness.” As part of an ensemble anchored by star Amy Poehler, he’s there for humour, starting with his hilarious appearance: Offerman describes him as “a man like the guys who used to be on TV in the mid-’70s,” complete with “a kick-ass moustache” and hair that looks like “he rolls out of bed and runs a comb through it once.”

But Parks is also a topical comedy, and there’s a timely concept behind Ron. Offerman says creators Greg Daniels and Michael Schur based him on a real official they met, “a libertarian who claimed to want to bring the department down from the inside. They thought that was very funny, for a mid-level government employee to be virulently anti-government.” Like the philandering councilman who is obviously based on former South Carolina governor Mark Sanford, Ron is a slight exaggeration of something real; Schur told the Los Angeles Times that he’s like “one of those Bush appointees who doesn’t believe in the mission of the branch of government he’s supposed to be overseeing.”

Apart from the comedy value, Ron may have helped create a theme for the show. The strongest scenes often play him off against Poehler’s character, Leslie, an idealistic do-gooder. It’s a boss-employee relationship similar to Alec Baldwin and Tina Fey’s on 30 Rock, but it also presents competing views about government: Ron believes his job is useless, and Leslie thinks government can literally “bring people together.” Offerman thinks it’s fun to see Leslie, “this incredibly ambitious tireless optimist,” butting heads with “the real stick-in-the-mud, foot-dragging negative spirit that we find in Ron.”

That contrast has been the source of some of the best episodes, like the one written by Norm Hiscock (Corner Gas, Kids In the Hall) where Ron tried to prove to Leslie that awards for government work are meaningless. And the current storyline, about Leslie’s attempt to save the department from being closed, is quietly forcing Ron to choose between his politics and his friendship: “He’s torn between rooting for Leslie, because she’s so much fun to see succeed, and wanting to see the government go away,” Offerman explains.

Which means Parks and Recreation is partly about people transcending politics: Ron “cares about some of the people that he works with,” Offerman says, and “that creates a conflict within him” with his desire “to see this whole thing get shut down and save the taxpayers some money.” Like most sitcoms, the show tries to find a middle ground in a divided U.S.; people with different ideas can get along and work together if they like each other.

Besides, even if Ron were a more overtly political character, people wouldn’t be able to use him as a validation of the new conservative mood. “People have asked me if Ron would be a member of the Tea Party,” Offerman says, “and the answer is always that Ron is a committee of one, and regardless of what is going on in the country, he stands by his simple principles.” The way the new U.S. Congress is going, Ron might turn out to be the last person in the world who really believes in small government. Or as Offerman puts it, “If Ron Swanson had a campaign slogan, it would be ‘paddle your own canoe.’ ”