The making of Mary

How did a few cameos in the Bible create the world’s most powerful woman ever? 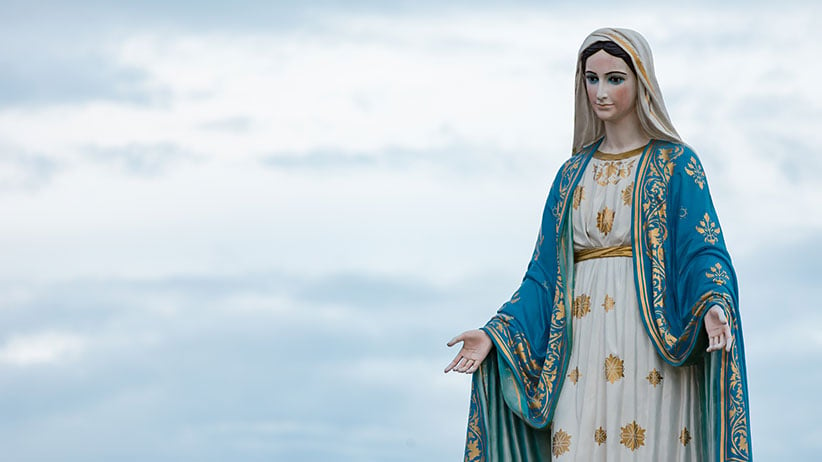 Mary, the virgin mother of Jesus Christ, rates a mere 19 references in Scripture, and barely dented the consciousness of Western Christianity in the first millennium of its existence. Rather miraculously, for all this, today she is the most recognizable female figure in the world. Her reach is enormous in the heartland of what was once Christendom. A short walk along the Thames, as Peter Ackroyd points out in Sacred River, yields over 50 churches and other religious foundations named after her. And that’s in Protestant England: in Catholic Spain, it’s impossible to turn a corner without encountering something or someone, woman or man, named after Mary. She is found throughout the Western tradition in painting, sculpture and music, not to mention in Christian liturgy and Christmas ads. Nor is devotion to her a mere echo of past belief. The modern pace of Mary’s ongoing apparitions has, if anything, quickened since she showed herself in 1858 to a poor French girl named Bernadette in Lourdes, and to three children at Fatima in Portugal in 1917.

Outside Europe, too, Jesus’s mother has been a powerful presence for centuries. One of Mary’s most recent appearances to be accepted as genuine by the Roman Catholic Church took place in a Japanese nunnery in 1973. Then there is Guadalupe. No other Marian site is more significant in the history of Catholicism than the Mexican shrine. There, in 1531, a decade after the Spanish Conquest, on a hilltop sacred to an indigenous mother goddess, Mary appeared to an Aztec convert, Cuauhtlatoatzin—known since his canonization in 2002 as St. Juan Diego—and spoke to him in his native Nahuatl language. Our Lady of Guadalupe was the bridge between natives and Spaniards in their slow fusion into Mexicans, and a crucial force in bringing millions of New World natives to Catholicism. Today 10 million people a year visit her basilica.

How it all came to be, how Mary emerged from a handful of Gospel references to become so woven into the fabric of Western life that it is impossible to conceive of Western history without her, is the subject of Miri Rubin’s wonderful book, Mother of God: A History of the Virgin Mary (Yale UP). Some of Mary’s scant scriptural references, like the stories of the Christ child laid in a manger and the flight into Egypt, are cherished parts of the Christian story; while others, like the Annunciation (when the Angel Gabriel told the virgin she would bear the son of God) and the Magnificat (Mary’s prayer of praise), are vital in theological and liturgical terms.

But, as in the case of Christ himself, there is little personal information about Mary’s life. Just as the pious speculated about the true nature of Jesus in the decades after his death, Rubin notes, they pondered—for the same reasons—those questions about his mother. The Apocrypha, books of Christian devotion and legend that were not ultimately absorbed into the canon of Scripture, filled the gap, abounding with tales of the marvellous child and the special woman who bore him. By 150 CE the Protogospel of James had given Mary a backstory appropriate for the mother of God. The daughter of a rich couple, precocious Mary was offered to the Temple at age three and dwelled there in purity until a divine sign picked Joseph as her husband—or rather, guardian, since she remained a virgin. And when nascent Christianity spread to Egypt and encountered the cult of Isis, mother of the god Horus, Mary’s status began to rise even higher. Isis was a powerful and kind-hearted deity, attributes Mary soon acquired. One Egyptian temple bears an inscription requesting, in the same language as those importuning Isis, the blessing of “the mother of us all, the holy, God-bearing Mary.”

As the centre of Christian gravity moved to the Greek-speaking Byzantine Empire, the Egyptian influence was to prove crucial in making Mary ever more exalted, until she became queen of heaven. In fifth-century Constantinople, paralleling earlier battles over just how the divine and human mingled in Christ, an unholy row arose over whether Mary was the bearer of God or just of the human Jesus. Syriac Christians, Aramaic-speaking and closely connected to their Jewish roots, held to the latter; Egyptian Christians to the former. With Christianity growing more distant from its Jewish roots—and the emperor’s influential sister inclined to the concept of an exalted, rather imperial Virgin—Mary, the Bearer of God, won the day.

Ever since, Rubin argues, a constant state of tension has surrounded Mary. That tension—poised between virgin and mother, human and divine—is the source of her endless variety of portrayals, all gracefully traced by Rubin, from the young, sometimes playful, virgin girl to the grief-stricken and empathetic mother at Calvary. The need to ground Mary explains why she did die, as befits a mortal, but was raised bodily to heaven, as befits the mother of God, and why too there was a lengthy theological debate over whether Mary menstruated. Eventually won by the naturalist side, it was no less than an argument over her humanity.

In the West, popular interest in Mary was much slower to form, but when it took root, in the early 12th century, it sparked an explosion of art and devotion. Preaching, liturgy and other theological work by clergymen was central to the development, but in Rubin’s opinion, the lives they led were even more important. Most monks began their religious lives as oblates, young children offered to religious houses by their parents. “Those young boys were wrenched away not just from their own mothers, but from the entire feminine world—the entire vernacular, domestic world, in fact,” she says. “The language of their prayers to Mary, their cries for support, is so moving.” After celibacy was enforced for parish priests, they began forging similar ties. “Even in modern times, there is a notable bond and a notable tension in Catholic countries between a mother and a son who enters into the religious life—so easily equated with Mary and Jesus—the pride on the one hand and the sacrifice of family, of grandchildren, on the other,” Rubin says. “Those clergy, too, must have had poignant relationships with their heavenly mother.”

But there was a Mary for everyone, not just motherless clerics, in the flowering of medieval Mariology. For every image of a heavenly queen commissioned by wealthy art patrons, there was a story of the humble carpenter’s wife, particularly gracious to the poor and those who suffered. Her miracle stories were gathered in numerous similar collections, but one Spanish compilation, Songs of Saint Mary, stands out. It contains miraculous tales not only of Christians saved from death in wars against Islamic realms, but of Muslims converted to the faith by Our Lady’s grace. (Islam has always been friendly to Mary. The Koran mentions her 34 times to the Bible’s 19, and considers her a good and holy woman. There is considerable evidence of Muslims visiting Marian sites in Islamic lands, and Spanish Christians considered Mary uniquely suited for bringing Muslims to Christianity.)

As the role of Our Lady of Guadalupe shows, Mary was destined to become the engine of Catholicism’s transformation into a global faith. It was a role first honed during the reconquest of the Iberian Peninsula from its Arab invaders, a 780-year struggle that had brought numerous Muslims under Christian rule by the time it ended in 1492. Thus it was triumphant Spaniards, fresh from conquering the last Iberian Islamic state and accustomed to Mary’s role in mass conversions, who brought her to the world.

“In bringing Mary to the indigenous peoples in what’s now Latin America, the image of maternity—so universally recognized, so powerful—carried the meaning,” says Rubin. “As she was in Egypt, Mary was the major bridge to societies with maternal deities.” The irony is intense. Mary is closely associated with suffering, both experiencing it and offering solace for it. It’s that attribute of the sorrowful mother—captured in marble for Westerners in Michelangelo’s Pietà—that “made Mary so welcomed by those indigenous peoples who suffered so much at the hands of the very men who brought her to them.”

Rubin ends her book around 1600, with all the wonders of modern Mariology still to come, partly because she was leaving her medieval and European zone of expertise, partly because she felt she had left her readers with “the tools” to interpret the Marys they see around them. That is certainly true: among the swelling tide of Marian apparitions are two in Belgium in the early 1930s, seen by kids. Anyone wondering why then and why there will be interested in Rubin’s description of the Great War memorials in every French and Belgian village, each with a sorrowing mother figure deliberately reminiscent of the Pietà. Consider the circumstances facing those children: brutal economic times and the rise, just across the border, of an aggressive (and anti-Catholic) Nazi state. What more consoling sight could they have desired? For faithful and skeptic alike, Mother Mary always comes in times of trouble.