Ai Weiwei: the man who isn’t there

The absence of China's most famous international artist is palpable at his Canadian show, a reminder of a precarious life

It’s less than three weeks to the Aug. 17 opening of Ai Weiwei: According to What? at the Art Gallery of Ontario, and the raw, cavernous space that will house it is a hive of activity. Only four of more than 40 works to be displayed in the Chinese artist’s first major Canadian show have been installed. Ladders, hydraulic lifts and huge wooden crates dot the floor. Two boxes marked “crabs” contain more than 2,000 life-sized porcelain crustaceans that reference one of the 55-year-old artist’s famous acts of protest—an actual crab feast—just before authorities demolished his studio in 2010. His puckish defiance is evident, too, in photos propped against walls: images from his time in the ’80s New York City punk-art scene and of his middle finger in front of Tiananmen Square and the White House; his 1995 triptych Dropping the Urn, in which he cements his cultural-provocateur status by smashing a Han Dynasty vessel.

Yet the literal absence of the artist, who has been under house arrest in Beijing since 2011, hovers as a ghostly presence. “He is here but not here,” says Kitty Scott, the AGO’s curator of modern and contemporary art. “He can’t be anywhere but where he is.” Scott, who travelled to Beijing to meet with the artist months ago, reports that Ai, as he is known, has hung showy lanterns from the surveillance cameras on his street, another finger to authority.

That isn’t surprising. A melding of personal and political defines Ai’s art, as do East-West mash-ups that see Chinese idioms and traditional craftsmanship filtered through a pop art sensibility. Scott points to an empty platform that will display antique urns dipped in colourful industrial paint. The first piece installed at the AGO, Straight, is more quietly elemental—and powerful. More than 37 tonnes of twisted steel rebar recovered from the rubble of the May 2008 Sichuan earthquake have been straightened, the rods stacked in an undulating rhythm. It took three days to assemble. The wall next to it is stencilled with the names of more than 5,000 students killed in the quake due to shoddily constructed schoolhouses. Nearby, on a video monitor, Ai expresses contempt for the lack of government accountability: “So many people died for corruption,” he says. Members of the local Chinese community will read the names of the dead aloud as part of the exhibit.

It’s one example of bridging here and there. The entry passage has been wallpapered with ominous photographs of construction in Beijing, a record of development without progress. The idea is to acclimatize visitors, Scott says: “I thought there was a nice echo of Toronto.” At the next stop, anyone unfamiliar with how Ai has used his political persecution as a springboard can watch scenes from Alison Klayman’s 2012 documentary Ai Weiwei: Never Sorry. In 2009, he required emergency surgery after a police beating. In 2011, he was imprisoned for 81 days, and has been under house arrest in Beijing since.

All have fuelled Ai’s work and radical-chic celebrity. Three of his large-scale works, one recreating his detention, were shown at the 2013 Venice Biennale; now we have this five-city North American tour originating at Tokyo’s Mori Art Museum in 2009. Ai is concerned about every aspect of the show, says Scott. Mami Kataoka, a curator at the Mori who’s close to him, will arrive in a few days to help with the installation. Two of his assistants are on site reassembling Kippe, an intricate work of stacked wood sourced from dismantled Qing Dynasty temples. AGO staff is busy building the Marcel Duchamp-inspired 42-bicycle sculpture Forever, a comment on China’s modernization.

Most people know Ai’s work only through the Internet or mass media—he tweets eight hours a day to more than 200,000 followers and regularly posts videos. But virtual renditions, Scott argues, are a pale substitute: “Only by being exposed to the work’s incredible materiality and the way he thinks about those materials, can you begin to understand.” She points to a photograph of Teahouse, a sculpture made from compressed tea leaves, in the show’s catalogue. “Beautiful, and fragrant,” she promises. “It will go here,” she says, pointing to an empty space. 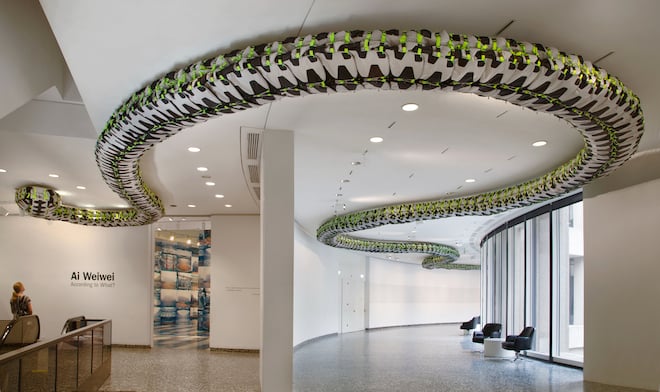 Snake Ceiling, 2009. Installation view of Ai Weiwei: According to What? at the Hirshhorn Museum and Sculpture Garden, Washington D.C., 2012. (Photo: Cathy Carver)