The most famous Canadian photographer you’ve never heard of

You'd hardly know it, but George Hunter’s work is everywhere

Wandering through George Hunter’s Mississauga, Ont., studio, one gets the distinct impression of flipping through Canada’s scrapbook. Portraits of smiling Inuit huddling in igloos, steely-eyed miners, and fleet-footed draveurs prying open log jams adorn every inch of available wall space. Anyone who grew up in Canada in the 70s and 80s has probably seen at least one George Hunter photograph. His images have appeared on currency, stamps and in textbooks and galleries across the country.

Photographers get a raw deal in Canada, where they’re just barely more famous than poets. Apart from the late Karsh brothers or Ed Burtynsky (of Manufactured Landscapes fame), the average Canadian would have a hard time naming a top photographer. Despite his extensive body of work, Hunter is as inconspicuous as they come.

You’ve seen his images on the $5, $10, and $50 bills as well as two stamps. His photos have appeared countless times in textbooks, brochures, and corporate marketing material. A photo of his featuring Toronto’s Pearson Airport Terminal was even included in a time capsule aboard the Voyager II mission in the event it is intercepted by intelligent beings. He was one of the first photographers inducted into the Royal Canadian Academy of Arts, and has been presented with a lifetime achievement award by the Canadian Association of Photographers and Illustrators. His images can be found in the permanent collections of public galleries across the country, including the Canadian Museum of Contemporary Photography in Ottawa. And yet, outside photographer circles, he is virtually unknown.

“George has always been an icon in our business,” says Bert Hoferichter, an Alliston, Ontario-based photographer. “His images of the Eskimo from 1940 are just unbelievable. There are very few people in our business who have come close to what he has done.” 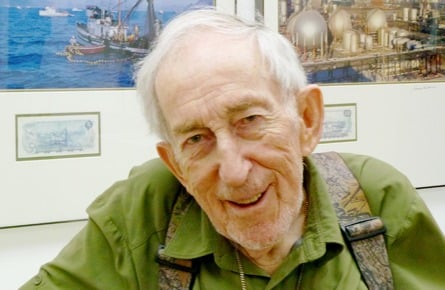 At his home on a tony stretch of road in Mississauga, Hunter squints under a powerful backlight looming over his broad, photo-strewn kitchen table. His hunched posture and wispy white hair with matching beard attest to the mileage he has put on his 88 year-old body. A taciturn man, he takes his time answering a question: what advice does he have for aspiring photographers? For a long moment, it’s not entirely clear if he plans on sharing his thoughts at all.

Hunter would know. In addition to his exhaustive travels within Canada, he can boast of having visited 135 countries during his career, and has tales that would inspire envy in Indiana Jones. He’s talked his way onto the last plane out of Afghanistan before the Soviet invasion, shot footage in Nova Scotia’s Westray coal mine days before it exploded, and survived several small plane-related incidents, the most notorious of which involves him nearly falling to his death over Edmonton.

“That looks like hell in print,” he says, objecting to the term ‘falling.’ “I’m not that stupid that I go falling out of airplanes. I was thrown out!”

As Hunter tells it, he was leaning out the door of a rented Aeronca plane to get some “fresh air.” Without warning, the pilot abruptly dove and banked to the left in an effort to avoid a bird strike, surprising Hunter and lifting him out of his seat.

“When he hit the stick, my camera hit the safety belt buckle and unfastened it, and I went right out,” says Hunter. “Thank God the plane had double struts, because had it been a Cessna I wouldn’t be here right now.”

One hand clenched stubbornly around the camera, he hung precariously under the wing while the pilot tried vainly to communicate with him through the rush of the slipstream. Indicating that he intended to land, Hunter repeatedly shook his head, motioning that he wanted back in.

“Eventually he got the point and rolled the plane to the left, and I dropped the camera into the cockpit. He did it again and it was the lift I needed and I climbed back in.”

And then he continued his shoot.

Born in Regina in 1921, Hunter moved with his family to Winnipeg in 1934. As a boy, a subscription to Meccano Magazine, which featured stories and pictures of hobbyists around the world, stirred his imagination. On one of the rare nights his father—a traveling salesman—was home, Hunter, by then 15, complained that “some lucky rich kid” would represent his school at King George VI’s Coronation in England. Struggling like many in the Depression years, he knew enough about the family’s financial situation to understand that the $100 dollar entrance fee was too steep. Besides, he needed to be elected by his peers, a daunting task for a shy kid. Nonetheless, after a little prodding by his father, he pulled it off and found himself bound for England, armed with a Voigtländer Bessa camera.

The trip proved a turning point in Hunter’s life. It was during this time that he discovered what would become his two passions: traveling and taking photos. He attended the Coronation, shooting everything he saw, and upon his return sold his first photo—of a horse in a field—through Eaton’s, inadvertently launching his career.

The following year Hunter hooked up with railway photographers Nicholas Morant and Harry Rowed, who mentored him and introduced him to the world of professional photography. Next came a stint as stills photographer with the National Film Board, a job which required extensive travel throughout the country and abroad. Hunter acquired his pilot’s license during this time, recognizing the small plane was an efficient way to travel the vast distances required for the job. While on assignment at a geological survey camp at Knob Lake, Quebec in 1948, Hunter met a metallurgist named Patricia Stevenson with whom he struck up a romance. A pair of free spirits, they soon moved in together and became life-long partners.

In 1950 he quit the NFB and decided to buy a plane for his new freelance career. Thus began Hunter’s 60-year photographic odyssey, which covered an astonishingly large amount of the country. It was during this time that he did his most high-profile work: Time magazine’s “The U.S. After Dark” photo spread. “If you’re so damn smart,” a surly editor at the magazine had suggested to him, “why don’t you photograph the United States at night for us?”

“I said, ‘are you kidding? That’d be wonderful.” Hunter had by then mastered the art of taking solo nighttime photos by putting his Piper Clipper plane into a stall just long enough to take a time exposure shot. He flew around the U.S. for two weeks taking photos while his peers at the magazine scoffed.

“I figured the piece would be about eight pages, max,” he says. “Then it turns out to be 12 pages plus a publisher’s letter. Who knew?” The groundbreaking spread of sprawling urban centers gleaming in the dark was the largest Time had ever produced.

“I’d like to introduce you to the board of directors,” Hunter says, shuffling down the hallway of his brown and red bungalow. ‘The board’ consists of four portraits of Papua New Guinean tribesmen, two of which were of the famous Asaro Mudmen tribe. With vivid headdress and face paint, they stare fiercely at passers-by.

From there, a flight of stairs leads down to Hunter’s expansive workspace, featuring room after room of computers, printers, cameras, and filing cabinets filled with prints and negatives. Every surface displays photographs of various sizes, from 8×10 portraits to massive prints that take up entire walls. The Canadian Rockies, the shores of Newfoundland, and the Yukon tundra are interspersed with Chinese cyclo drivers, burqa-clad Algerian women, and Peruvian street children.

By far the most surprising room is Hunter’s private studio. Flipping on a bank of light switches, he reveals an 18-foot-high space with a projection room hidden behind a dark window at one end. One wall is adorned with four massive 4’x 8’ nature photos, while the opposite wall displays documentary shots from several continents.

Andrea Kunard, the associate curator at the Canadian Museum of Contemporary Photography, says Hunter’s reliance on the theatre of industry is what makes his work distinctive. “He showed the heroism of labour and industry,” she says. “You have to remember that the environmental concerns we hear about today weren’t on the public radar back in the 50s. The point of George’s work was show that Canada was a strong industrial country that could compete in the global market, and he captured that very well.”

Walking through his brightly-lit workspace, Hunter seems perfectly happy to have the respect of his peers in lieu of overall fame. According to Lou Perrin, a Calgary-based photographer and former business partner, Hunter’s personality is both an asset and a liability. A legendary deal maker, Hunter once had a global network of airline employees, travel agents and hotel managers all willing to provide free services, allowing him to travel for months on end at little cost. “However, he’s not a smooth talker,” Perrin says. “He’s abrupt, and sometimes he turns people off.” Perrin recalls an incident at a restaurant in Maine where no sooner had they been seated than Hunter was standing, yelling at the staff for service. “My wife was with us, and she’s a slow eater,” he says. “By the time she had started her meal, George was finished and said ‘OK let’s go!’ He has no patience. Things have to move. Fast.”

Hunter won’t support that view, but doesn’t refute it either. “If you get good weather, you have to use it,” he says. “If you wait until all the ‘i’s have been dotted and the ‘t’s crossed, the weather would be gone. I’d be judged by the lousy pictures I took of the lousy weather.”

Hunter worries about what will become of his work. Instead of finding one home for his images — such as the prestigious National Archives (which he describes as picky) — Hunter is selling and donating his material to smaller galleries across the country that are not only more appreciative of his work, but will hopefully provide a wider, more diverse audience. In March he sent material to three galleries in Quebec, one in Regina, and another in Campbell River, B.C.

“I’ve seen collections go in the garbage can, and others go to archives where they’re never opened again,” he says, motioning to the dozens of photos lying about on tables, benches, and cabinets. “I worked hard to make my pictures and I’d like to see them continue their usefulness.”

After a brief trip outside to leave food for the deer that inhabit the conservation area adjacent to his house (he knows it’s wrong, but Patricia insists on it), Hunter lowers his frame into a chair at his kitchen table with a grimace. Under the glaring backlight, he pours a bottle of Chinese beer into a glass.

“If I had to do it over again I wouldn’t change a thing,” he says. “Except I’d learn to fly a helicopter and I’d take pipe organ lessons. And meet Pat sooner.”