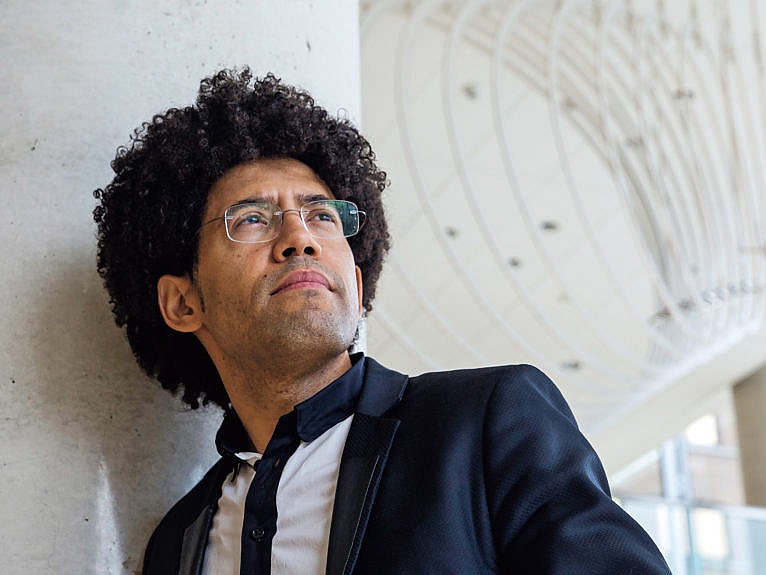 Payare, the energetic new music director of the Orchestre symphonique de Montréal, is proving to be anything but boring (Photograph by Yannis Guibinga)

The Orchestre symphonique de Montréal didn’t become Canada’s most prominent orchestra by preaching only to the converted. Legendary status depends on the support of the masses. So in September, when Rafael Payare began his tenure as music director designate of the fabled orchestra—its chief conductor and guiding musical philosopher for the years ahead—the OSM made a grand populist gesture. Payare led the OSM in a free outdoor concert for thousands of curious Montrealers on the concrete esplanade in front of the city’s iconic Olympic Stadium.

The amplified acoustics were terrible, but who cared? Payare, a willowy 41-year-old Venezuelan with a formidable shock of curly hair, led the orchestra in a set of crowd-pleasing highlights from Tchaikovsky, Stravinsky, Manuel de Falla and Alberto Ginastera. The crowd, seated nearby in plastic chairs or standing farther afield, ate it up. At times Payare is a fastidious conductor who gives precise direction with quick, tidy hand gestures. But in other passages he’s more gestalt than specific, conveying only the sweep of a beat and a sensation of urgency. He uses his feet more than any conductor I’ve seen, kicking to emphasize an accent, launching himself a foot and a half into the air and landing spread-eagled to mark a climax. In short, he’s not boring. The applause was generous from the start and grew warmer as the evening went on.

A sort of alchemy was at work, one we’ve seen in Montreal before. Before Payare took the podium, there were opening remarks from dignitaries. Perhaps the most revealing ones came from Michel Labrecque, a glad-handing former radio host and downtown city councillor who is now CEO of the Olympic precinct’s facilities. “You know, something happens between Montrealers and OSM music directors,” Labrecque told the crowd. “You don’t need to be a big music maven, but we all seem to be in a mood to fall in love with them.”

READ: A cave-diving photographer on ‘swimming through the veins of the Earth’

In many cities, orchestras matter to a thin slice of the local culturati and not much to anyone else. But the OSM has long worked hard to make itself part of Montreal’s broader cultural self-image. The orchestra has been around since the 1930s, but it shot to global prominence after 1980, when an imperious young Swiss conductor named Charles Dutoit rode the compact-disc recording boom and an exclusive contract with Decca to make the OSM the most recorded orchestra in the world. Collectors around the globe needed new digital recordings to replace their vinyl LPs. Dutoit favoured the fleet, flashy repertoire from countries east, west and south of classical music’s German home: Frenchmen like Ravel and Debussy, Russians like Stravinsky, Italians and Spaniards. In those days, billboards and TV ads proclaimed that in Montreal, “La fierté a une ville”—“Pride had a city.” A central image of the ad campaign was Dutoit conducting the OSM.

Dutoit stormed out of Montreal in 2002, declaring he’d had it with the musicians’ union. It emerged later that the union had had it with Dutoit, and with what would today be called a toxic work environment. Dark years ensued, including a five-month strike. But the OSM managed to find another artistically serious and charismatic leader, the Californian Kent Nagano, who became the music director in 2006. Nagano had made his career in Germany. He led the OSM for its first, very good recordings of Beethoven symphonies. He also quizzed the orchestra’s support staff about who the local Wagner-style gods and heroes might be. Some great orator? A military hero? Not really, they replied. Around here it’s mostly hockey players. Peacekeepers. Whoever designed the Métro subway system.

Nagano, not obviously a gregarious fellow, took the answers seriously. He dutifully commissioned new compositions in honour of Terry Fox and Roméo Dallaire, conducted Inuit throat singers and an ode to the Métro’s founding anniversary, and showed up in a Habs jersey at the Bell Centre more often than some of the hockey team’s goalies.

These successive love affairs have been studiously chaperoned by OSM management and the city’s leading political and cultural figures. Lucien Bouchard, the firebrand politician who came within an ace of winning Quebec’s 1995 secession referendum, is now 82 and has been chair of the OSM board for longer than he was ever in elected politics. He presented greetings by video to the Olympic Park crowd. A week later he was present in person when Payare led the orchestra for its proper season opener at the Maison symphonique, an austere and resonant concert hall that opened 10 years ago as a legacy project from another premier, Jean Charest.

As a successor to Dutoit and Nagano, Payare seems a bit slight. He’s a largely unknown quantity in the music world. The orchestras he’s led—Belfast, San Diego—are fine bands, but you don’t build a global reputation in such outposts. To the OSM, this was actually part of the appeal. Madeleine Careau, the OSM’s CEO—its chief administrator since the Dutoit days—reminded me that Dutoit was 37 when he came to Montreal, Nagano 48. Neither was widely considered a star then either. “We wanted somebody who’d want to win with us. I don’t believe in the OSM just needing a conductor, the conductor must need the OSM,” she said. “It gives him energy.”

I wonder whether a little cross-town competition will give Payare energy too. He is the first OSM music director who’s younger—by five years—than Yannick Nézet-Séguin, who conducts the Orchestre Métropolitain. At the beginning of the Nagano years, Nézet-Séguin was a nearly negligible factor in Montreal’s musical landscape, a nice kid running a comparatively under-financed orchestra that plays only a fraction as many concerts as the OSM. But he’s grown into a global juggernaut as music director of the legendary Philadelphia Orchestra and the Metropolitan Opera in New York, and hailed as a star wherever he works around the world.

READ: Montreal might have Canada’s most beautiful manhole covers

Posters near the Maison symphonique proclaim that Nézet-Séguin and his upstart orchestra are “Closer Than Ever.” Is that how it feels to Payare? “Not at all,” Payare told me. He called Nézet-Séguin “a great artist” and noted that outside North America it’s common to have more than one prestige orchestra. That’s the right attitude to have, and it lets Payare concentrate on the tougher task: building a relationship with the musicians in front of him and the audience behind him.

The highlight of his first concert at the Maison symphonique was Dmitri Shostakovich’s 1937 Fifth Symphony, a depiction of menace and chaos lasting nearly an hour. Conducting from memory with no score in front of him, Payare elicited an astonishing performance. Sometimes he exchanged smiles of delight with individual members of the orchestra. Other times he’d keep his head down for long minutes, meeting nobody’s gaze, seeming to hear only some dream of the work underway. Payare looks like fun but sounds like business.

Together, the untested conductor and the storied orchestra will record, tour and premiere new works. Plans for all of the above are also in the works. In our interview in his backstage office, Payare was tight-lipped about them, for now.

MORE: Michael Wernick has some advice

“It’s a little bit kitsch to say, but it’s been like a dream come true,” he told me, referring to his first appearances with the orchestra and a live audience. His appointment was announced in January, in the depth of the COVID lockdown. Days later he led the masked and distanced OSM in a streaming video concert in an otherwise empty Maison symphonique. “We did an amazing Brahms First Symphony that ends almost like a scream of joy. And there was nobody in the audience.” Now the audience is back, and the joy is enhanced accordingly. What Payare does next will become the stuff of legend. In Montreal, this sort of thing usually does.

This article appears in print in the December 2021 issue of Maclean’s magazine with the headline, “Conducting electricity.” Subscribe to the monthly print magazine here.