The rise and fall of Alexander McQueen and John Galliano 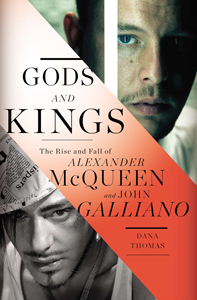 GODS AND KINGS: THE RISE AND FALL OF ALEXANDER MCQUEEN AND JOHN GALLIANO

By way of her first, bestselling book, Deluxe: How Luxury Lost Its Luster, Dana Thomas set herself up as a fashion vigilante of sorts. In it, she successfully exposed a handful of upscale clothing retailers and took them to task for their unethical, smoke-and-mirrors-style production of high-priced items. Her new endeavour focuses on two tragic geniuses in her field of study who’ve been presented by the British media like a pair of Disney villains. Both designers’ intensely ornate designs and larger-than-life runway presentations brought a dramatic shift from the tasteful minimalism that Giorgio Armani had imposed in the ’80s and ’90s. But for years, the tabloids—and much of the fashion press—had Galliano pegged as a salacious Cruella De Ville and McQueen as a raging Queen of Hearts.

For the most part, Thomas has freed her subjects from their cartoon confinements and crafted a sensitive dual-biography that explores the parallels between the two men’s lives. McQueen’s father was a cab driver, Galliano’s a plumber. Both floundered on the playground but flourished as students in London’s Central Saint Martins College. Both became the darlings of the global style set and were hired to reinvigorate archaic brands—Christian Dior in Galliano’s case and Givenchy in McQueen’s. Sadly, each spiralled into substance abuse, and worse. Thomas draws out some delicious behind-the-seams drama from assistants, buyers, fellow designers, and many of the fashion industry’s best raconteurs, including the witty American Vogue editors André Leon Talley and Hamish Bowles, who saw all the explosions and implosions. It is evident her favoured subject is McQueen, who hung himself at age 40 (Galliano was his senior by nine years). She praises him for employing obscure, high-minded historic references. In contrast, she takes pains to outline the inspiration behind Galliano’s famously tasteless Dior collection in 2000, which had $100,000 dresses inspired by the homeless and mentally ill. And there is extensive coverage of his anti-Semetic meltdown in 2011, the resulting fall from Dior and his career stumbles since. (He is currently waffling as creative director for Maison Martin Margiela.)

But poignant moments in both lives (like McQueen’s late-in-life HIV-positive status and his secret wedding/divorce) are glossed over in favour of solid business reporting with generous slices of scandal. Only the fleeting mentions of Björk and Lady Gaga (pop stars who brought McQueen beyond the runway), Gwen Stefani and Kate Moss (staunch Galliano supporters, who wore his wedding dresses) hint at both men’s legacies. Fortunately for readers, their place in the zeitgeist is just one Google search away.