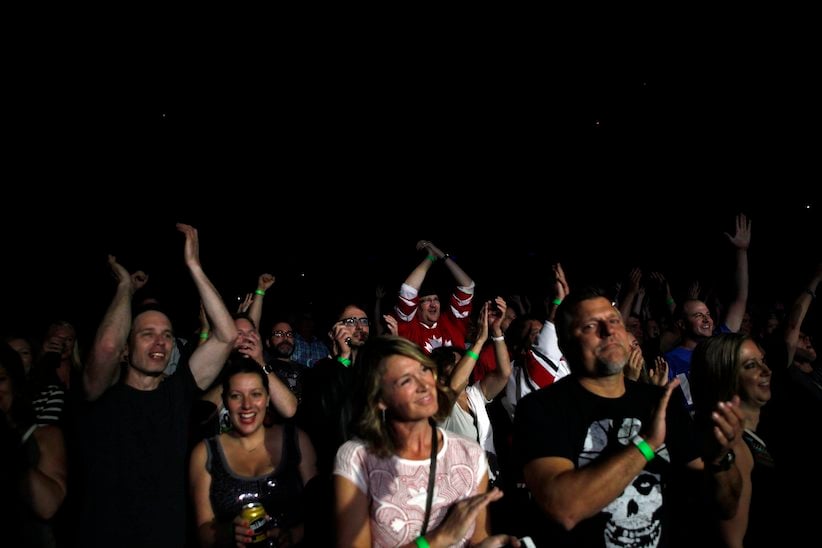 VICTORIA — Armed with will and determination — and grace, too — the Tragically Hip launched Friday what is sure to be an emotional farewell tour with a sold-out show at a hockey arena in Victoria.

The band took the stage at the Save-On-Foods Memorial Centre before 9,000 cheering fans, including luminaries such as John Mann, the Spirit of the West singer who was recently diagnosed with early-onset Alzheimer’s.

That lent an air of anticipation to the atmosphere in the audience, with many fans hugging and shaking hands before settling in to await the show.

The mood, however, was definitely more defiant than mournful, and the crowd seemed determined to party.

Downie apparently got the same memo, arriving on stage to howls of joy as he sported a head-to-toe magenta ensemble and white fedora adorned with a feather.

Wasting no time, the band launched into three of their biggest hits in rapid succession — “Boots or Hearts,” “New Orleans is Sinking” and “Blow at High Dough.” Downie’s voice was strong, though he did more standing than dancing and the band was circled tightly around him.

The Hip played 26 songs, including two encores in a set that lasted almost 2.5 hours.

The songs “Poets” “Little Bones” and “At the Hundredth Meridian” had the band at its rock and roll finest, with their duelling guitar sound ringing through the arena. But it was the ballads, especially Long Time Running and Wheat Kings, that drew the most intense emotions.

For the record: The set list from last night’s show in Victoria

It was as if everybody in the building knew they were attending more than just a concert as Downie held the notes just that much longer. People were on their feet dancing, but many were also wiping the tears as they swayed to the music.

“What gets me about stadium shows is every now and then there’s that perfect moment when pretty much everyone in the room is feeling the same thing, and there were several of those moments. For example, Long Time Running,” said Lexi Ratz of Victoria outside of the arena.

Hillary Krupa of Victoria said she also felt the emotion of perhaps seeing Downie and the band for the last time spread throughout the arena during the concert.

“There was a sense of respect and honour, not a sad feeling to it, just a true sense of honouring the miracle genius that he is, and being there with everyone feeling it together,” she said. “It was amazing.”

Downie never directly mentioned his situation, but at the end of the concert, when his band mates left the stage, he stood at the front of the stage and said: “Thank you everybody. Thank you very much.”

Janie Zmaeff said she travelled from Campbell River, B.C., to Victoria with her daughter, Carmen.

“This is my fifth time going to see them,” said Zmaeff. “I love the Hip.”

She admitted she was floored when she heard Downie was terminally ill.

“I was bawling my eyes out,” she said. “I’m going to start crying right now.”

Since their formation in high school in 1984, the Hip — Downie, guitarist Rob Baker, drummer Johnny Fay, bassist Gord Sinclair and latecomer guitarist Paul Langlois, who joined in 1986 — have released 16 albums and won 14 Juno awards along with a legion of devoted fans.

One of them, Avril Hughes, didn’t think twice about making the road trip to Victoria from her home in California.

“He had all the energy in the world,” she said of seeing Downie at the show in October. “It was spectacular.”

Victoria’s John Garside, 41, got two tickets to Friday’s show — one for his best friend of 30 years.

“He just moved back here with his family from Australia, where’s he’s been since about 2002. Is there any better way than to say welcome back to Canada and do a Canadian thing than to take him to a Hip show?”

For Jordan Kennedy, seeing Downie and his band mates perform in Toronto next month will be his 17th time hearing them live.

While a university student 21 years ago, Kennedy was an extra in the band’s music video for the song “Silver Jet.” There he had the chance to spend the day hanging out and chatting with the musicians.

“They say ‘Don’t meet your heroes because you’ll be disappointed.’ But I at least personally had the complete opposite experience with Gord and with the rest of the guys,” he said. “It was a dream come true and I wish I could do it again.”

The final show is planned for Aug. 20 in their hometown of Kingston, Ont. Fans who failed to nab tickets will still be able to watch the final live show, which is being broadcasted by the CBC.

Searching for the Hip’s Bobcaygeon

FILED UNDER: The Tragically Hip