In secret talks, would-be saviours duped Himmler into thinking he should stop the extermination of Jews 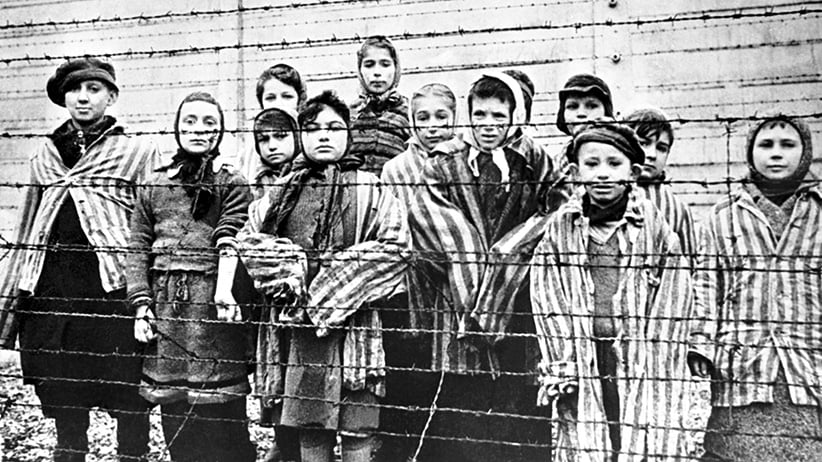 A group of child survivors behind a barbed wire fence at the Nazi concentration camp at Auschwitz-Birkenau in southern Poland. (Alexander Vorontsov/Galerie Bilderwelt/Getty Images)

In the 1990s, Toronto writer, journalist and documentary filmmaker Max Wallace spent several years working with Steven Spielberg‘s Shoah Foundation, recording video testimonies from Holocaust survivors. Although his writing career has been eclectic—with books on Kurt Cobain and Muhammad Ali—Wallace has continued to research Holocaust-era rescue operations. Those efforts have culminated in In the Name of Humanity: The Secret Deal to End the Holocaust, which offers a startlingly novel explanation of how the organized genocide of European Jews came to an end, months before the Second World War itself. This conversation has been edited for clarity and length.

Q: Your book examines the Holocaust from an angle most people have not had much opportunity to take. It’s from the outside in—not just the familiar historical narrative of Nazi persecution ramping up into genocide, but how the world reacted to it.

A: The problem with telling Holocaust stories is a lot of people think the Second World War is very black and white, which is true to a certain extent, compared to other wars. But when you get to the details of why the world failed to respond to the Holocaust, and then how it did, it gets very complex and murky. I have spent years following the Holocaust in real time, reading all these reports and correspondence as it was exchanged, and found things less black and white than even I had assumed.

Q: At the core of In the Name of Humanity is an arresting distinction that you draw between the Final Solution and the Holocaust. What do you mean?

A: The terms are often used interchangeably, yes. But by Final Solution I mean the systematic liquidation of European Jewry, primarily in concentration camps. The most important evidence I unearthed—one of my “almost-smoking gun” documents, because there is no conclusive proof—shows that the Final Solution was terminated in November 1944 by SS head Heinrich Himmler, who was in charge of it. But the Holocaust itself continued over the last six months of the war as tens of thousands more Jews died in death marches and from hunger and disease. To say the Final Solution ended so long before the war did is controversial. Himmler did order an end to extermination at Auschwitz and the destruction of the crematoria and gas chambers there that month, but most historians assume Himmler did so because the Russians were coming and he was trying to hide the evidence. But I discovered fairly compelling documentation that Himmler’s decree was actually the result of secret negotiations with people who wanted to rescue Jews, and of a massive deception played on him.

Q: Why then did he blow up the genocide apparatus at Auschwitz?

A: Himmler was conspiring behind Hitler’s back and he thought the lives of Europe’s remaining Jews were his most valuable bargaining chip with the Western Allies. At the same time, a number of players—including Nazis—were conspiring to deceive Himmler into believing there really was a possibility of a separate peace with the West. That was his main motive in terminating the Final Solution, certainly not because he had a change of heart about Jews. He seemed to genuinely believe that the West would somehow ally with the Nazis so they could turn on their common enemy, Stalin.

Q: You have three strange bedfellows on the rescue side of the negotiations: a Finnish osteopath, one of Himmler’s intimates; a dynamic, ultra-Orthodox Jewish woman in Switzerland; and an elderly Catholic fascist who was the former president of Switzerland. Who’s most important in this trio?

A: I would have to say Recha Sternbuch, whose rescue committee saved thousands of Jews fleeing Germany before the war and many more during it. Aside from those direct actions, she managed to enlist former Swiss president Jean-Marie Musy. In many ways she’s the easiest character to figure out, but as a secular Jew myself I came into this with serious doubts about the ultra-Orthodox. I gained immense respect for the Haridim, who determined on rescue because the Torah commands it. They were willing to bribe, they were willing to pay ransom, they were willing to break the law and go around government policy, deal with the enemy. Saving a life was more important than anything else. They come off as quite heroic.

Q: For the Orthodox, the Nazis, however horrific, were just another episode in Jewish history: there’s a long, long Jewish history of buying off murderers, doing what you have to, right?

A: It’s enshrined in the Torah, the principle of ransoming captive Jews. Meanwhile, the Jewish establishment in Britain and the U.S. was placing most of its faith in the Roosevelt administration and believed the best way to end the Holocaust was to defeat the Nazis. Yet, although there’s been a lot of the criticism about the establishment’s failure to loudly call for rescue, things aren’t so simple there either. Western Jews were finally in a position where the American people were in common cause in the mission to end Nazism And they were told the way to do this was to win the war as quickly as possible—paying ransom would just prolong it.

Q: They were also vulnerable to arguments that Western governments had to avoid anything that could let opponents declare the war was all about the Jews, and to the knowledge that ransom payments would go right into war materiel that would be turned on Allied soldiers.

A: Those arguments were quite convincing, and it would have seemed treasonable to many Western Jews to publicly criticize Roosevelt. Then you have Recha Sternbuch and the ultra-Orthodox who answer to a different set of laws.

Q: Next in order would be the osteopath?

A: Felix Kersten to this day is an incredible enigma. He was very influential with Himmler, and he seems to have been fond of him, even after Kersten learned what was happening in the camps. He was also quite the self-aggrandizing blowhard, who after the war altered many of his wartime diaries to make himself look better. So it’s impossible to really discern his motives, but there’s no question about the role he played in the rescue of the Jews. He was probably responsible for saving up to 60,000 Jewish lives.

A: He was an ardent anti-communist. He admired the Nazis early on because of their commitment to stamp out Bolshevism. But as he learned about the Holocaust, he was horrified. Like Sternbuch, Musy was profoundly religious, a devout Catholic, and genocide simply ran counter to that. A very devout Jewish woma, who was devoted to rescue because her religion commanded it, convinced him by using that very argument: you know we are servants of God, and we must do this. Musy threw himself into rescue during the final months. He has never been recognized. He still hasn’t been made Righteous Gentile among Nations at Vad Yeshem. But without Musy’s efforts, I think most of the remaining Jews of Europe would have been extinguished.

Q: He was instrumental in getting the Red Cross into the camps, and it was Red Cross officials who blocked more than one last-minute Nazi plan to kill the remaining inmates.

A: And he also played an important role in deceiving Himmler into believing there was a possibility of a separate peace—that was absolutely key, and the rescuers had to cultivate that delusion. Musy cut a very impressive figure among fascists. He knew Himmler from before the war from government and anti-communist circles, and was quite respected in those circles. So when Musy came to Himmler in the last months, claiming to speak on behalf of powerful, behind-the-scenes rabbinical authorities in Western countries, it was as though he had been anointed by the Elders of Zion themselves. Musy knew how the Nazis thought, knew how Himmler’s mind worked, and he successfully cultivated the fantasy of a separate peace. He was incredibly important in convincing Himmler to destroy the Auschwitz murder apparatus and end the deportation of the Hungarian Jews.

Q: That takes your account to where it all comes into focus: Hungary in 1944, home to the last enclave of Jews in Axis Europe, the main stage for a lot of key figures in the Holocaust, including Adolf Eichmann, and where almost everything that happened is still debated.

A: All of sudden in 1944, 800,000 Jews in Hungary are faced with imminent liquidation, and the world has finally stopped burying its head in the sand.

Q: You pick your way through chaotic and confusing events—sometimes the trains go to Auschwitz, sometimes they stop, sometimes there’s a ransom paid, sometimes a ransom blocked—to answer the question of why Himmler blew up the crematoria a full two months before the Russians arrived there, long before he had to.

A: It seems very clear that Himmler was successfully deceived into believing that the West was open to a separate peace with the Nazis, and that the key to this alliance was to end the extermination of the Jews. All kinds of people were instrumental in this. One of the many surprises that I encountered in years of working on the story was the role of the Vatican. Everybody’s heard about how Pope Pius and the Catholic Church supposedly stood idly by during the Holocaust. And yet time and again I encountered key Vatican figures behind the scenes, whose machinations played an important role in stopping the liquidation of Hungarian Jewry and abetting the rescuers’ scheme, working very closely with Sternbuch. It’s very possible that when the so-called secret Vatican archives are opened—perhaps next year since it appears they’ve finally been sorted and just await Pope Francis’s approval—they will provide a smoking gun to confirm many of my conclusions.

Q: In the end, you estimate that during the last days of the war, hundreds of thousands of Jews were saved by rescue efforts.

A: It’s really hard to give precise numbers. Historians have no certainty because many of the records were destroyed. So I say that these negotiations probably saved up to 300,000 Jews, including the remaining Jews of Hungary, who numbered about 200,000.