The weird and true story of Moondog

The story of the blind, homeless composer named Moondog is too weird not to be true 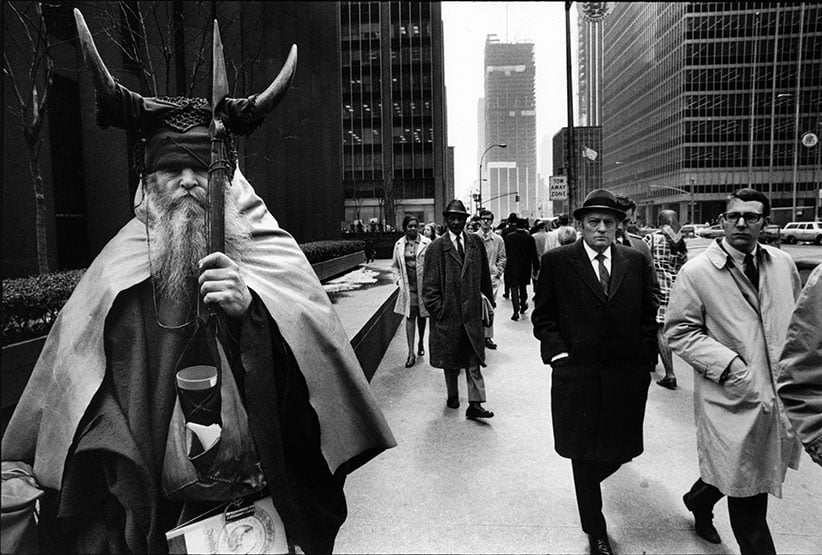 In 1960s New York City lived a blind, often homeless man with a long, flowing beard, who dressed as a Viking and stood sentinel at the corner of West 54th Street and Sixth Avenue in midtown Manhattan. He sold his poetry and performed on custom-built percussion. He’d been there since the ’40s; the Viking gear came later, so that people would stop telling him he looked like Jesus—and to help him cope with navigating a metropolis where metal parking signs were at head level. Most people thought he was mentally ill; they didn’t know he was an acclaimed American composer, recording for notable labels, praised by Leonard Bernstein and Duke Ellington, and who even made a children’s record with a pre-stardom Julie Andrews. There was always a lot more to Moondog than met the eye.

“The general public didn’t think of him as a musician, just as a character,” says Russell Hartenberger, a professor at the University of Toronto’s school of music; he’s also a founder of Nexus, a percussion ensemble that will perform as part of the Moondog @100 show being held at Toronto’s Music Gallery on Dec. 3, one of several tribute events being held across North America and Europe for the centenary of his birth (he died in Germany in 1999). A young Hartenberger met Moondog once, while practising with composer Steve Reich in 1971; Moondog’s influence is obvious in Reich’s own pioneering work in American minimalism. “We went to Moondog’s corner, and he was there with his Nordic outfit, the horned helmet and some kind of staff and robe, selling his poetry,” recalls Hartenberger. “I was a bit taken aback by the guy.” No doubt.

Moondog’s story is too weird not to be true, as a star-studded documentary due in 2017 will prove. The man who seemed more alien than even his contemporary Sun Ra (the jazz musician who claimed to be from Saturn) was born Louis Hardin Jr. and grew up in the American Midwest; he was blinded at age 16 by an explosive he discovered beside railroad tracks. He was 31 years old when he moved to New York and took the name Moondog. A beggar by choice, he turned down opportunities from people who wanted him to conform to any norms, starting with his choice of dress. He was a municipal landmark: One admirer arrived at the Port Authority Bus Terminal, got in a taxi and told the driver, “Take me to Moondog”; the driver knew exactly where to go. He made appearances on mainstream television (including The Tonight Show), licensed his music to commercials, and was covered by Janis Joplin. He was often taken in by fans; he lived with a young Philip Glass for a full year in 1968-69.

The original Moondog swung to a different beat—often 5/4 time, a stuttering meter he called “snaketime.” The non-conformist felt “the human race is going to die in 4/4 time.” Much of his early work consists of just voice and percussion, custom-built instruments like the triangular “trimba,” recorded on the streets of New York. He also composed for pipe organs, big bands (“Bird’s Lament” was sampled at length on Mr. Scruff’s 1999 dance hit “Get a Move On”), orchestras and simpler forms like madrigals and canons.

He credited his unique rhythmic approach to childhood experiences with the Arapaho tribe in Wyoming, where he learned the syncopation of their sun dances; he felt they had more swing than jazz. His second wife was a woman of Japanese descent who sang on many of his ’50s recordings, and his stringed instruments shared similarities with kotos or shamisens. He eschewed electronics and disliked the atonality of his peers, but his eclectic synthesis of styles was incredibly modern and distinctly American—and, needless to say, unique. Biographer Robert Scotto, author of The Viking of 6th Avenue, wrote: “To some he is too far out; to others he isn’t even avant-garde . . . He was accustomed to straddling two worlds, suspected by all, comfortable in no known school.”