And find an underrated food wonderland 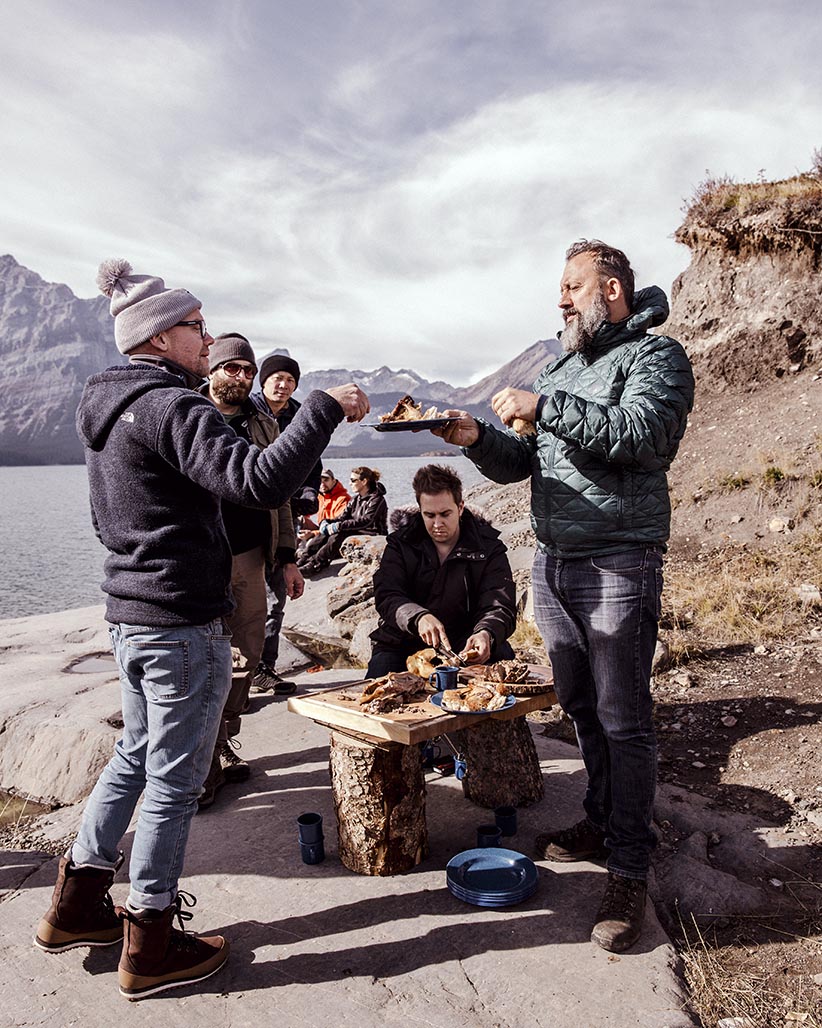 On a cloudless October afternoon, Albert Adrià—chef sibling of Ferran Adrià, and his partner in the game-changing elBulli (closed now, but, for over a decade the world’s most famously inventive restaurant)—was in Calgary creating ethereal perfection on a waffle iron that looked straight out of a Holiday Inn Express. One by one, he handed off waffles to Calgary chefs John Michael MacNeil and Scott Pohorelic, who smeared them with thick, snow-white yogourt, purple saskatoon-berry purée and crumbled almond spongecake. They scooped smoked ice milk drizzled with birch syrup into cups as giddy guests waited. #TeamSaskatoon, as they became known on Twitter, weren’t just making waffles; they were making the most delicious, most Albertan, waffles ever conceived.

While Adrià was perhaps the brightest luminary at the event, he was just one of a constellation of international Michelin stars and Alberta chefs who had been quietly rooting through the province’s pantry for the past several months. The chefs had been selected to participate in an intensive process to explore and shape the province’s culinary identity. At a Sunday garden party at Rouge Restaurant in Calgary—watched by millions around the world on social media—the seven Alberta-inspired dishes were revealed.

Six months prior, a globe-trotting culinary agitator, Alessandro Porcelli, announced in his thick Italian accent, “We’re going to do something very sexy here.” Porcelli’s itinerant Cook It Raw movement—nothing to do with raw food, but rather about having some of the world’s best chefs reimagine food through to its foundations of hunting, gathering, fishing, butchery, pickling, smoking, and cooking over fire—had touched down in Alberta. (Not randomly—he was courted by and funded through the Alberta Culinary Tourism Alliance, a non-profit with the goal of fostering culinary tourism in the province.) And where Porcelli goes, so do some of the world’s best avant-garde chefs.

Porcelli found the calibre of local chefs to be high, and wondered why Alberta doesn’t get more attention in international—or even national—culinary circles. The chefs he selected included Connie DeSousa of Charcut Roast House in Calgary, Shane Chartrand of Sage Restaurant at River Cree Resort near Edmonton, and Eden Hrabec of Crazyweed in Canmore. He also puzzled at the underappreciated First Nations’ influence in mainstream Alberta cuisine, when hunting, foraging, drying and smoking are dominant trends elsewhere. Add eye-popping agricultural productivity and abundant wild, indigenous food, and you have a chefs’ playground. He thought Cook It Raw could put Alberta on the map as a global gastronomic destination to watch.

Porcelli, a semi-professional basketball player-turned-café-owner-turned PR genius (for Noma restaurant and then the Danish government), showed up for dinner about a year ago at Three Boars restaurant in Edmonton’s university district. Brayden Kozak, co-owner and head chef at this farm-to-table favourite, recognized Porcelli immediately. “I had no idea he was scouting,” laughs Kozak with a toothy, Ewan McGregor-esque grin. “It seemed really exclusive. Getting invited as a cook never crossed my mind.”

The invitation to participate didn’t come without obligations. In May, the Alberta chefs were told to detach from family, work and WiFi for a four-day, zero-frills quasi-survivalist experience on Cucumber Island, a sandspit in Lac La Biche, 245 km northeast of Edmonton. By day, they roasted in a late spring heatwave. By night, they slept in canvas tents. They built their own cob oven for cooking. Moose wandered within metres of their tents, and northern pike seemed to bite with each cast. A First Nations sweatlodge guide led them through a ceremony, a profoundly introspective experience by all accounts.

Throughout the retreat, Porcelli instigated discussions about cooking and food. The intensity of the experience brought the chefs together. “We all knew one another in passing,” says soft-spoken, bushy-bearded Cam Dobranski, of Calgary’s Wine Bar and Brasserie Kensington. “Lac La Biche quashed any of that Edmonton-Calgary rivalry.”

On their final day, with bloodstained aprons—they had just been shown how to skin and butcher a bison by First Nations hunters and cooks—the chefs were divided into seven teams. Each would create a dish based around one iconic Alberta ingredient: honey, beef, bison, canola, root vegetables, Red Fife wheat, and saskatoon berries. In October, their international counterparts would arrive with ideas of their own, a week ahead of the final presentation. 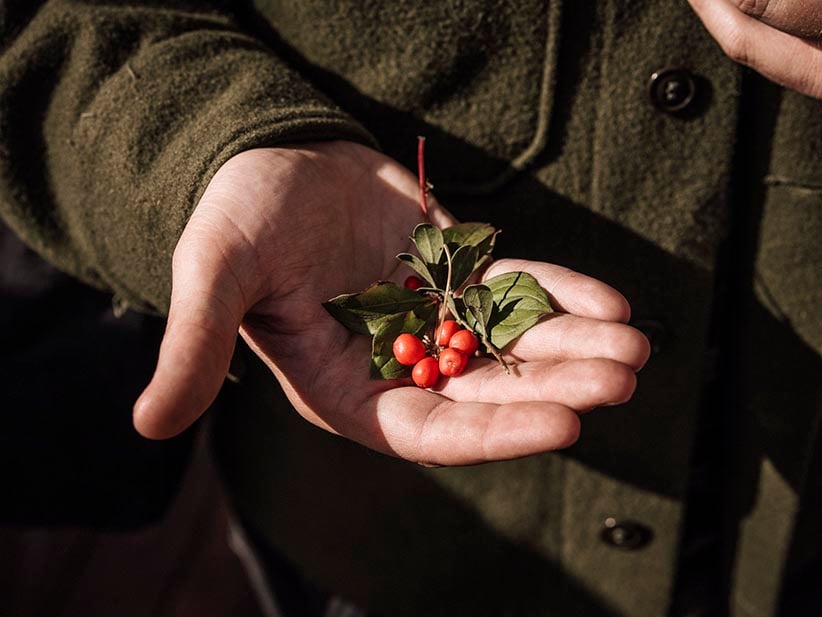 It was Boy Scouts by day, and in the wee hours, the culinary equivalent of the Group of Seven’s Algonquin School discussions. Porcelli scheduled four days filled with excruciatingly rugged activities of canoeing, fishing, learning elk calls and archery. Every evening sample dishes were prepared and tasted. Fierce discussions erupted—one big family gathered around the dinner table. As teams cycled through—Team Honey, Team Root Veg, and so on—dishes were refined and rethought. Toronto chef Jamie Kennedy had flown in to offer his perspectives, given his decades of work in creating a Canadian culinary identity.

Back in Calgary, it was time to reveal Alberta’s culinary narrative through the seven ingredient-based dishes. An invitation-only dinner for 60 in the teaching kitchens at the Southern Alberta Institute of Technology began with a still life boreal tableau based around honey. (Alberta produces one-third of the nation’s honey crop.) The dish included honey-cured trout sprinkled with dill pollen, with bright green dots of spruce-and-smoked-leek emulsion, rhubarb and cranberry gel, goldenrod-coloured salted honey sponge toffee and a hopped mead bannock. Swedish superstar chef Magnus Ek’s “new nordic” aesthetic was obvious in the team’s presentation, but so were the subtly sweet undertones of so much Canadian Prairie cooking. 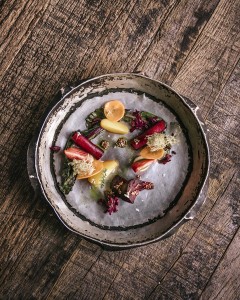 The canola course followed, perhaps the most challenging of all the ingredients. Yes, it’s a $6.1-billion per year industry in Alberta, but how do you create a dish around what is largely considered an export commodity crop? Here it was a study in Brassicas, the genus to which canola belongs. They rested delicate Brussels sprout leaves on a creamy squash-canola curd. They created a smoked egg aioli. They sprouted and pickled canola seeds, and dressed compressed turnip slices with apple cider and nutty, cold-pressed canola oil. Jp McMahon brought a concept from his Michelin-starred Galway restaurant to the table as seasoning: burnt kale ash with salt, a twist on salt and pepper.

In the province of steak and potatoes, perogies and borscht, root vegetables were reimagined in a dish with over 15 different preparations including a garnish of deep-fried lichen. As Calgary’s Cam Dobranski rattled off the various elements, from salt-dough roasted beets to a ravioli— made from powdered red beets and konjac, a vegetable-based gelling agent—filled with parsley root, horseradish and chèvre, he laughed, admitting it “didn’t seem like so many things” as they were making them. And there was East-West crispy fried Red Fife wheat flatbread slathered with a bright green fenugreek sauce, wild boar jowl, compressed Okanagan-grown Asian pear, fried red cabbage confetti and popped Red Fife wheat berries. There was a deconstructed bison stew, and bavette of beef.

Then dessert, made by Adrià, Scott Pohorelic and John Michael MacNeil. It arrived in a birch log, split in half, and with a cutout in the rounded bark side. This was covered by lacy gingerbread tuile you had to break through with your spoon to reveal the housemade yogourt and saskatoon purée with crumbled almond spongecake, birch syrup and roasted pumpkin seeds. Thousands of Instagrams, tweets, and Facebook photos flooded the Internet, tagged #teamhoney, #teamRedFife, #RawAlberta.

A very short sleep later, it was time for a broader reveal at Rouge to the 200 people who’d paid $125 a ticket to taste Alberta’s newly minted edible identity. “We [chefs] do everything in silos,” explained John Jackson, co-chef and co-owner of Charcut Roast House, who took part in Cook it Raw two years ago in Charleston, S.C. “Everyone is talking about culinary tourism, but before that happens, we need a culinary identity.”

It’s too soon to know what will come of this effort. As the afternoon wore on, Adrià buoyed his jetlag with a pint of Calgary lager with his new Albertan friends. This is why he travels, Adrià said in his broken English. “Cook It Raw is muy importante. We’re equals. We’re compañeros. I like that.” “It made the scene a little smaller,” says Kozak. “It’s nice having friends who all understand the same issues. But what happens now? Everyone is expecting us to carry the torch. Now . . . we have to do something.”

In a large-capacity professional blender, purée the squash and red pepper until smooth. (If using a regular home blender, work in two batches and you may need to mash the squash a bit by hand at first.) Allow the purée to cool slightly if it’s still quite hot. Add ginger, lemon juice, honey, and canola oil. When blended, place in stainless bowl. Cool in the refrigerator for approx 30 minutes, or until completely cool.

Add all eggs into cool mixture and stir well.

Create a double boiler on the stove by placing a small pot half-full with water on medium heat. Place the stainless bowl with the mixture so that it rests on top of the pot with water. With a whisk, stir the mixture continuously until it thickens (approximately 20 to 25 minutes). You may see ribbons resembling scrambled egg throughout. Don’t worry. When the mixture is a thick curd, remove from heat, and place back into the blender. Blend until completely smooth. Adjust seasoning, adding the salt, and even a touch more lemon or ginger as desired.

*To make kale ash, trim black kale (also known as cavelo nero, Tuscan kale, lacinato kale, or dinosaur kale) of its stems. Reserve leaves for roasted kale. Place stems on a cookie sheet and into a 375-degree Fahrenheit oven until black and dry, about 10 minutes. Remove and allow to cool. Blend in a spice grinder and pass through a fine metal sieve. Add sea salt to taste.

[Editor’s note: An earlier version of this story misidentified the location of Pure C restaurant.]