There’s beauty hiding in the weeds

From 2009: Seaweed lowers cholesterol, thickens sauces, and can give you skin as soft as Johnny Depp’s 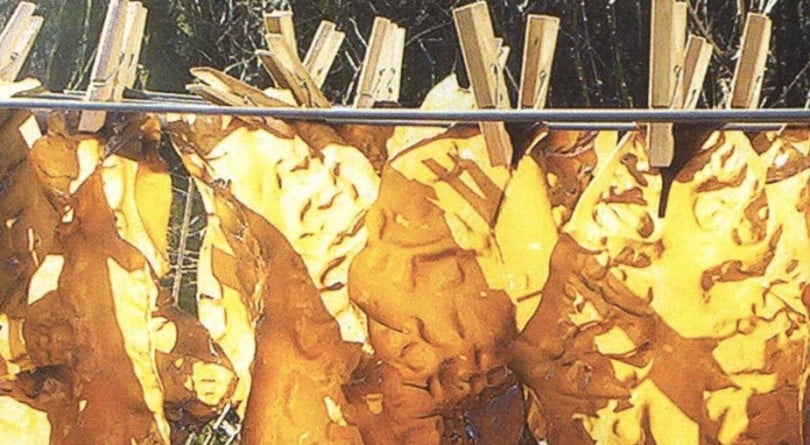 On B.C.’s remote Hornby Island, population 900, Norwegian-born Vera Rønningen teaches local women how to make use of washed-up seaweed for food and beauty products. Rønningen sells packages of her seaweed beauty products locally at the co-op grocery store and boat rental kiosk for under $20—giveaway prices when you consider that Estée Lauder charges $130 an ounce for a seaweed cream called Crème de la Mer worn by Keira Knightley and Johnny Depp.

“I haven’t used skin cream for 10 years, just my seaweeds,” says Rønningen, who’s dressed in brown coveralls and work boots, her long blond hair tied in a bun. She has a bachelor’s degree in marine ecology from UBC and a master of science from Norway’s University of Bergen.

For her retail products, Rønningen dries the seaweed and grinds it into preparations for cellulite wraps and facial masks, but harvesting the specimens straight off the beach is an even sweeter deal for those who know what they’re looking for: it’s free and the bits and pieces can be used as is.

To demonstrate, Rønningen plunges her arm into a plastic bucket and pulls out a bib-sized rubbery flap of red seaweed and shakes it out. She passes it around to the women who’ve each paid $25 for this three-hour hands-on field trip. The group is gathered at low tide on a tourist-free beach. The spa-like feel of this all-female outing is brought home when one of the women stands in the warming sun and uninhibitedly sheds her wool sweater for a cotton blouse. The other women sit on bleached-out driftwood logs in the white sand, taking notes as Rønningen gives the Latin name for this bumpy, rubbery piece: Chondracanthus exasperatus, she says, commonly known as “Turkish towel” or, as she likes to calls it, “nature’s washcloth.”

“You take a piece with you to the bath or shower and scrub with it. Once it hits the water, it starts producing carrageenan, which is like a mucilage and your skin drinks it up. It has little papillae all over it that are full of antibacterial and antifungal chemicals. I had one piece that was pink and purple and just beautiful. I used it every single day for two weeks in the hot shower. I hung it up to dry in between.”

Next, Rønningen hands around a sample of one of her multi-use seaweed products that she claims not only protects against UV rays but can be used to treat cellulite. The packaged product looks like bouquet garni for soups. She calls the product Sea Orbs “because ‘balls’ is a weird word,” she says. “I sprinkle it on and as it falls down there’s this little sizzle on your skin. It’s the most amazing feeling and it draws out the toxins. Seaweed is not like a plant that once you dry it out, it won’t come back to life. These guys are inter-tidal. They’re adapted to drying and wetting and drying and wetting. The cells are still alive.” To mask any unpleasant sea odours, Rønningen adds dried ground Hornby Island-grown lavender. “Lavender covers the fishy smell.”

“Oh, here we go,” she calls out excitedly, as the group begins to comb across the beach for still usable seaweed. “Remember I told you about Mastocarpus? The one I use to thicken my macaroni and cheese? Here it is! You rinse out the saltiness in some fresh water. Then break it into little bits and put it in a cloth bag and cook it slowly. It thickens your sauces instead of using flour. When it’s the thickness you want, take it off the heat. It’s got a slightly spicy flavour. I love it.”

In winter months, Rønningen collects nori (used for sushi) and toasts it and eats it. Nori grows abundantly in blades on the rocks just 15 m ahead. “Nori can keep for decades and not lose its nutritional value if you dry it and store it and light doesn’t get to it. It could probably come back to life. It’s amazing. It lowers cholesterol and blood sugars. It’s full of phytonutrients and antioxidants. I don’t think you can overeat it.”

Emma Hutchinson is thrilled with the knowledge she’s acquiring on this rare day away from her two young sons. Her oldest boy loves to snack on nori. “It’s so expensive to buy and you get it in such little bags, and there’s all this plastic wrap,” she says. “I’m going to try to harvest my own now that I’ve learned a few distinguishing features between the toxic seaweeds and the ones that look alike.” Rønningen’s picture book of Hornby Island’s 64 different seaweed varieties tells readers E is for edible, M is medicinal, T is toxic.