The sushi of the future is insects

Fancy a cube of crickets? Maybe a meal worm? Or a locust? 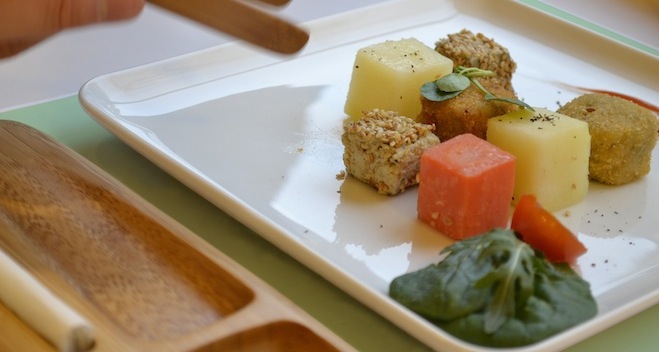 My family went out for sushi most Friday nights when I was growing up. Though my six-year-old palate was not sophisticated enough for nigiri (it was always chicken yakitori for me), my yuppie parents wielded chopsticks frequently. In the late ’70s, sushi in North America was rare and eaten only by the very open-minded (because raw fish = ick) but by the ’80s, celebrities and city-slickers made sushi synonymous with being chic and healthy. That’s quite a branding leap.

The sushi of the future is insects. By 2050, 9 billion people will inhabit the planet and meat will be like caviar; expensive and hard to get. With a protein gap on the horizon, insects are being touted as a realistic and sustainable food choice. It’s been on the menu around the world for centuries but Westerners have never warmed to the thought of a creepy-crawly on the tongue. Sure, we’re willing to chomp on lobsters and shrimp (the insects of the ocean) but ask someone if they’d eat a bug and most will make the ick face. So what’s the secret to getting Westerners to eat insects? Like sushi, it’ll be good branding and good design.

Ento is a self-described roadmap for introducing edible insects to the western diet. Created by four London-based design students, they plan to move bugs from the fork of the adventurous foodie to the suburban dinner table in less than 10 years, aiming to hit UK grocery stores by 2020. But to get started they tried out a range of recipes on their fellow students and noted that the most popular dishes were those where bugs were least conspicuous. The locust pâté went quickly but there were plenty of leftover whole fried crickets.

“That was an important lesson,” says Jacky Chung, one of Ento’s principals, “We understood that knowing one was eating insects wasn’t a problem. It was the visual.” 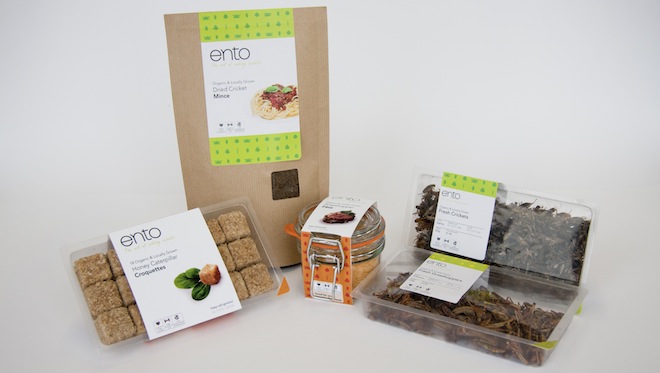 Much like Jessica Seinfeld’s allegedly plagiarized cookbook, Ento opts to purée crickets, locusts and meal worms and sneak them into your lunch. Pairing with a Cordon Bleu culinary student, they’ve created a range of prototype recipes, including the Ento box, where insects are blended with complimentary flavours and shaped into cubes. The end product, packaged like a Japanese Bento Box (complete with dipping sauce and chopsticks), has a futuristic, clean look: an important aspect in the hard sell of bug-eating.

“A lot of people think insects are unclean,” says Chung. “ But they’re very safe to eat. Their genetic makeup is so different from our own that it’s unlikely we could contract any diseases they might have, unlike the way we could with the mammals we eat now: think of swine flu. But consumers needs a visual signifier,” he says, adding that like ground beef at the grocery store, the cube shape shows that the “meat” has been processed and this human intervention suggests the product is safe to eat.

Ento’s slick design and potential positive environmental impact recently won them an award at Amsterdam’s Green Design Competition and they plan on plugging the €15,000 prize money into their project to help turn it into a company.

If Ento’s minimalist design appeals to the neo-yuppie market,  then Chapul bars are hoping to attract hippie hipsters and their insatiable quest for a fusion of organic ingredients and old-timey reverence. Inspired by Marcel Dicke’s TED Talk, these all-natural bars from Salt Lake City have flavours like peanut butter and chocolate, and coconut, ginger and lime. They’re dairy-free and include plenty of organic ingredients (like nuts and agave nectar) – and cricket flour, inspired by the Aztecs who used it in a lot of their cooking. 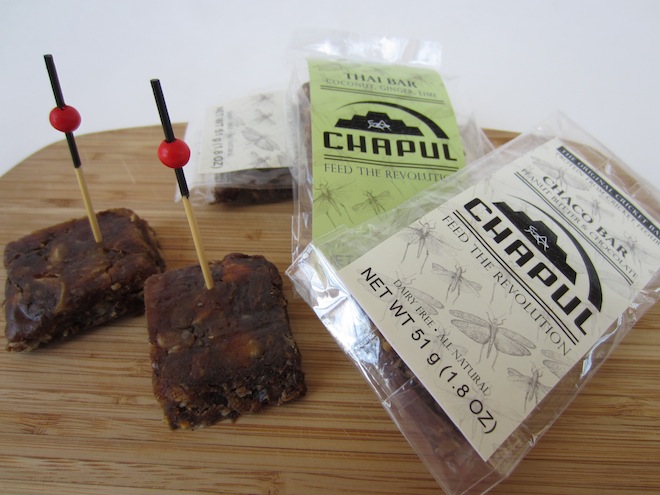 A quick taste-test around the Maclean’s office revealed that most were willing to give the bars a try: an assistant editor said, “Sweet…and gritty. Is that because of the crickets?” Another editor thought they were OK, but “if it was between these and a normal bar, I’d pick the normal bar. Not because the cricket ones taste badly, only because I know there’s crickets in them.” Three staff members compared the bar’s taste to Larabars and one intern said, “I’ll eat anything.”

The reality is that steak and pork chops as primary protein sources are on the way out for most of the next generation. And although there are many that may still make the ick face at the thought of eating bugs, starting to at least consider incorporating insects in our diet is a good start–good design will make that easier to swallow.