A week in the life of Aerosmith and GM gives back 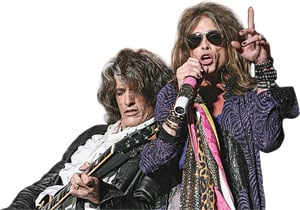 A week in the life of Aerosmith
Rock stars can be an indecisive bunch. Last week, rumours swirled that lead singer Steven Tyler had quit his band, Aerosmith, after more than 30 years together and countless hits, and Joe Perry, the band’s guitarist, said he and the rest of the group would be looking for a singer to replace Tyler. Happily, the boys managed to overcome their differences—Tyler and Perry appeared onstage together in New York City and Aerosmith is reportedly back together.

Best foot forward
The Canadian ski team revealed this week it has been using a top-secret high-tech gadget called “Stealth” in training for the Vancouver Games. The device allows the latest edition of the Crazy Canucks to track their every move down the slopes—and then evaluate where to find more speed on course. Stealth was developed at the University of Calgary three years ago, but our skiers were sworn to secrecy so that other teams wouldn’t get their hands on it. Hey, all’s fair when it comes to the Olympics (except, ahem, certain illegal things). Too bad women ski jumpers won’t be finding their way downslope as well­—the B.C. Court of Appeal rejected female jumpers’ claim of discrimination last week.

GM gives back
When the Canadian and Ontario governments handed General Motors Canada a $10.6-billion loan in June, many cynically suggested we’d never see the money again. They were wrong: on Monday, GM announced it would begin to pay back the loans earlier than expected—an initial $200 million will be returned to Canada in December, and the company expects to repay the rest ahead of the July 2015 maturity date. GM is also considering an IPO in 2010—which could actually make money for Canada and Ontario.

Befriending China
China isn’t so bad after all—that’s the message Barack Obama is trying to impress on his first visit to China as U.S. President. Obama and Chinese President Hu Jintao met in Beijing on Tuesday to discuss climate change and economic policy; the two later released a joint statement to the press, the first time the leaders of the U.S. and China have done so in more than a decade. Obama also held a town hall-style meeting with Chinese university students (though some reports suggested Chinese authorities meticulously chose participants from the ranks of the Communist Youth League). The next step is engaging Beijing on its less-than-stellar human rights record, something Obama has thus far proven reluctant to do.

Ready to e-read
The Kindle is finally coming to Canada. After years of waiting patiently, Canadians will be able to get their hands on Amazon.com’s e-book reader, which has been a big hit in the United States. There is a catch—you’ll have to buy the device through the U.S. online Kindle store (for US$259) and pay extra for shipping and duties. But the good news is that the Kindle will be here in time for Christmas. Now, if only we could get the online TV service Hulu.com and the Google Voice phone service, we’d be a truly high-tech nation.

We’re giving less
After giving a record $8.6 billion to charities in 2007, Canadians scaled back their generosity in 2008. Job losses and a global recession contributed to a five per cent drop in charitable donations—to $8.2 billion—according to figures released this week by Statistics Canada. Despite the tough times, however, relative generosity hasn’t changed much across the country. As was the case in 2007, Prince Edward Island and Alberta are still the most big-hearted provinces, with median annual donations of $370 and $360 respectively. And Quebec is still the stingiest, with a median annual donation of $130.

Parizeau speaks
He’s back! In a new book, La souveraineté du Québec hier, aujourd’hui et demain (Quebec Sovereignty Yesterday, Today and Tomorrow), former Quebec premier and separatist movement champion Jacques Parizeau argues that Quebecers would be better able to fight the global recession on their own—that is, without the rest of Canada—and suggests that a third referendum will occur in the not-too-distant future. With separatism at an all-time low in Quebec, we wish Parizeau would fade away. He brought us to the brink once before—and that’s once too often.

Don’t trust Iran
“Boring”—that’s how an Iranian official described the International Atomic Energy Agency’s new report, which chastised Iran for being uncommunicative about its nuclear ambitions. After Barack Obama revealed in September knowledge of a second hidden nuclear plant, the Iranians went into defence mode, claiming the site was simply a “backup” if the larger, previously acknowledged, site were to go down. Call us crazy, but we don’t trust the Iranians when it comes to their nuclear ambitions—why all of the secrecy and posturing if this is really about providing power to the country?

Corruption champs
For the second year in a row, Afghanistan and Iraq are at the top of Transparency International’s annual survey of the world’s most corrupt countries (Somalia rounds out the top three). This is sobering news for those who support the West’s efforts to end the rule of terrorists and tyrants. There is no doubt of the widespread corruption in both Afghanistan and Iraq—the former’s recent election embarrassment was a major failure on the road to democracy. Still, we cannot lose our resolve to fight the Taliban and al-Qaeda, who want to install sharia law, strip women of all rights and wage a holy war against our freedoms. This survey should only strengthen our commitment.

FACE OF THE WEEK 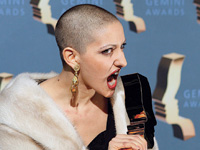 AWARD EATING: Christine Ghawi, who played Céline Dion in a CBC biopic, poses with her Gemini award for Best Actress