The director of The Green Inferno in conversation with Barry Hertz 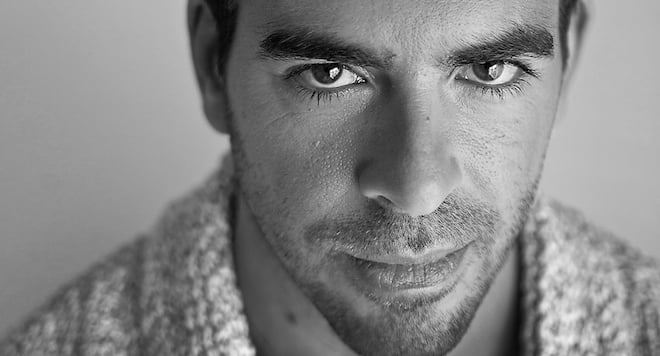 This past Saturday, at about 10 past midnight, Eli Roth made a triumphant return to the festival that kicked off his career. It was 11 years ago that Roth, then a no-name American director hawking an on-the-cheap horror film called Cabin Fever, closed the typically sleepy last night of the Toronto International Film Festival.

At this year’s TIFF, Roth delivered his first directorial effort in five years, The Green Inferno. The film, which follows a group of naive environmental activists who get attacked by the very cannibal tribe they were trying to protect, is everything you would expect of a Roth production: darkly funny, extremely tense and filled with all manner of abhorrent violence. I caught up with the 41-year-old director to talk cannibal films of years past, and the perverse peculiarities of shooting in the wilds of Peru.

Q. I was at the premiere on Saturday, and it felt like a homecoming for you.

A. It was very much a homecoming; I immediately felt right at home and that’s because the people of Toronto have made me feel that way. That Midnight Madness crowd, it’s just one of those nights, I’ll never forget it. You just want those fans at this moment in time who want to see the first thing you’ve done in six years: “Is he a one- or two-hit wonder, or is he a bona fide director?

Q. Did you feel more confident coming in this time around?

A. With Cabin Fever, I wasn’t only unknown, but horror movies didn’t really exist at the box office. There was The Ring and a couple of PG-rated movies, but R-rated horror, those weren’t being released, they were going straight to video. So to me it was helping bring the horror genre as a whole back. Coming in now, it’s a very different experience, directing at age 30 versus directing at age 40.

You’re still nervous and there’s this pressure and it’s intense, but I’m so happy I produced all the films I did, that I went to China for The Man with the Iron Fists, that I gone to Chile for Aftershock, and then worked on Inglourious Basterds. I could not have directed The Green Inferno before doing all of that, because it was such a complicated shoot, shooting in three different countries with three different crews, and people who are living in a village who had no conceptual idea of what a movie was. It was a wild experience.

Q. You shared some pretty intense stories during the premiere, regarding the Peru shoot. What is one of the most extreme situations?

A. There are so many. One day, we’re about to do the first shot of the village when suddenly these two boats filled with Christian missionaries pull up. They were going up and down the Amazon with speakers and stages to sing about Jesus. And when they pull up to our set, they see what the characters see: heads on pikes, skeletons tied up and villagers with spears and red paint. They said, “Oh my god, the devil really is here.” But it wasn’t the devil—it was the Bear Jew, Eli Roth, me. They were so angry that I was there first and stole their thunder, and of course I ran to get my camera to get the footage of the reaction, but the Peruvian officials on set told us to let it go, let them handle it.

Q. Sounds like an idea for a potential sequel.

A. Well, there are a lot of ideas floating around for the sequel.

Q. Is it a little unusual for a sequel to be announced so quickly? How long had that been in the works for? [After The Green Inferno had its world premiere at TIFF, Roth announced that his producing partner Nicholas Lopez would direct a follow-up, Beyond the Green Inferno.]

A. Well, we had been dealing with international financiers, and we had been showing them footage, and everyone said they wanted another one. We’re building a franchise. What I love about The Green Inferno is that—and we didn’t expect this while working on it at first—is that we went into the Amazon and came out with so many stories about local legends, like this devil spirit and stories about people kidnapped and eaten, all sorts of crazy things. There’s so many different stories that could be turned into movies, and we called it Beyond the Green Inferno because we want to continue the stories, but make each one different, like Planet of the Apes. We could call it Beneath the Green Inferno, etc.

Q. And what about your relationship with Lopez? That’s been developing for a few years now within the South American film community.

A. Lopez has become a great close friend and collaborator. Two years ago, Nicholas was talking about shooting in Peru,  and was saying we could reinvent things down there, start a whole new movie-making system, and we’ve really done it. Lopez really has South America figured out. In Hollywood, things move so slow, and Nicholas moves very, very fast. Very few people are 30 years old and made seven movies that were all widely released.

Q. Just before the premiere, you said you didn’t want the audience thinking of Cannibal Holocaust or other classic horror movies before watching your film, to just enjoy it as it is. Are you looking to honour that genre, or is The Green Inferno something totally new?

A. Well, there is a cannibal sub-genre, and this is certainly made in that tradition, but I wanted to do what Tarantino did with Kung Fu and Kill Bill. He’s obviously paying respect to the masters, but this is his version of it. Or what RZA did with The Man with the Iron Fists: take what you love of that era, and do a modern version of it.

But for me, I wanted to add what I saw as the relevant social commentary of what’s happening in the world right now. You see all these kids, with this new form of activism that I call “slacktivism,” which is just retweeting whatever the latest trend is. It’s much more about appearing to be a good person than actually making a difference.

Your Facebook views and retweets do nothing. They raise awareness, but unless you actually go to a place and work on that one specific issue, nothing is going to happen. The kids [in The Green Inferno] think, “Oh, we’re smarter than that, we can just head down there, stream something and go home.” And it seems to work for a moment, until their plane crashes and they realize how truly in over their heads they are.