TIFF 2014: Adam Sandler loses his sole in The Cobbler

Highlights from the seventh day of the festival, including Adam Sandler's latest attempt at career rehab and John Cusack's thoughts on America's path to war (really)

As the festival entered its seventh day, Toronto seemed a bit emptier. No longer were copies of The Hollywood Reporter or Variety being handed out at the Scotiabank multiplex, nor were journalists threatening each other with death (OK, more the threat of raised eyebrows) at the line for the free sandwiches in the press room. As is typically the case, the last stretch of TIFF resembled a ghost town, with most of the international press having flown the coop, and the buzziest films come and gone.

The festival’s sense of malaise, exhaustion and emptiness carried itself into the early Wednesday morning screening schedule. This was doubly unfortunate for Adam Sandler’s new movie, The Cobbler, which already has so much going against it that adding a grumpy and diminished press corps seems cruel. Still, the comedy is an unmitigated disaster on all fronts, and it’s hard to imagine that anything—even a Friday night premiere—could save it.

The Cobbler‘s failure is disappointing on two fronts. First, the film is directed by Thomas McCarthy, the sometime-actor who helmed the wonderful dramas The Visitor and The Station Agent. McCarthy is usually an expert at illustrating the countless tiny relationships that build our lives, and has an ear for crisp and smart dialogue. Not so much here, as McCarthy struggles mightily to establish a tone of quirky magical realism in a tale of a cobbler who can literally walk in someone else’s shoes (did I mention this was an Adam Sandler film?). Things start off promising enough—a Yiddish-language opening is particularly effective, almost Coen-brothers-like in its efficiency—but McCarthy ends up resorting back to big-studio comedy tropes and slipshod plotting.

The film’s other disappointment is star Adam Sandler, who was supposed to emerge from this year’s TIFF a newly made man in the vein of Punch-Drunk Love or Funny People. Unfortunately, his first act of reinvention, the Jason Reitman drama Men, Women & Children, was pilloried so thoroughly it’s a wonder critics didn’t burn Ivan Reitman’s Montecito restaurant to the ground. If Sandler was pinning a career reinvention on Reitman and McCarthy, perhaps he should just give Paul Thomas Anderson another call.

Although most of the international press had fled (too many press conferences to ruin elsewhere in the world, I suppose), there were still tantalizing interviews on offer for whoever remained. First up was John Cusack, at TIFF to promote both David Cronenberg’s Maps to the Stars and Bill Pohlad’s Love & Mercy. The erstwhile Say Anything heartthrob has enjoyed a dispiriting career arc over the past few years, having left big-budget studio fare like 2012 for more low-rent genre flicks that disappeared from theatres soon after making their debuts (if they debuted at all).

Hopefully his dual performances at TIFF will turn things around, as both are Cusack’s best in years. While I was eager to discuss his collaborations with Cronenberg and Pohlad, though, I made the mistake (perhaps subconsciously) of bringing up Barack Obama’s war against ISIS, which led the politically active Cusack and I down a rabbit hole of geopolitical discussion.

“We just don’t realize our relevance in an ongoing crisis that we started by bombing these countries,” Cusack said, going on to name-check the “war crimes” of Dick Cheney, Henry Kissinger and the like. “This thing is so beyond us, what’s been unleashed. Whatever is going to play out, we’re going to be spectators as more and more people will be killed.”

So … cheery stuff! But despite the seriousness of the conversation—and the fact that we didn’t touch on either of his films during our 10-minute window—it was genuinely fulfilling to have an honest-to-goodness conversation with the actor, not an extended rehash of a studio’s press notes.

Things were back to a more typical bent later in the day, as I sat down with the director and star of the action film ’71, which tells the harrowing story of one rookie soldier’s night in IRA-controlled territory during the Troubles. The thrilling film, directed by British TV veteran Yann Demange, is easily one of the best entries at this year’s festival—fast, controlled and taut—and features a standout performance from Jack O’Connell, who has already been tipped for bigger things thanks to his lead role in Angelina Jolie’s upcoming war drama Unbroken.

O’Connell, who I’m not afraid to say has the most piercing eyes I’ve ever seen, was laid-back and relaxed during our brief discussion, which touched on everything from his accidental career (“I just wanted to impress the girls in class, you know?”) to Jolie’s devotion to her actors (“She really fought for me against the studio”).

Demange, on the other hand, was intensely serious about his craft and the challenge it was to jump from TV to film. “I didn’t just want to make a movie for the sake of it—there’s so many films out there that are anonymous, I want to go into it thinking that it has to be done, that I’m the person who can do it,” he said. “Every minute of film has to earn its place—it’s haiku. Every frame has to earn its place, it has to be an event in some way.” 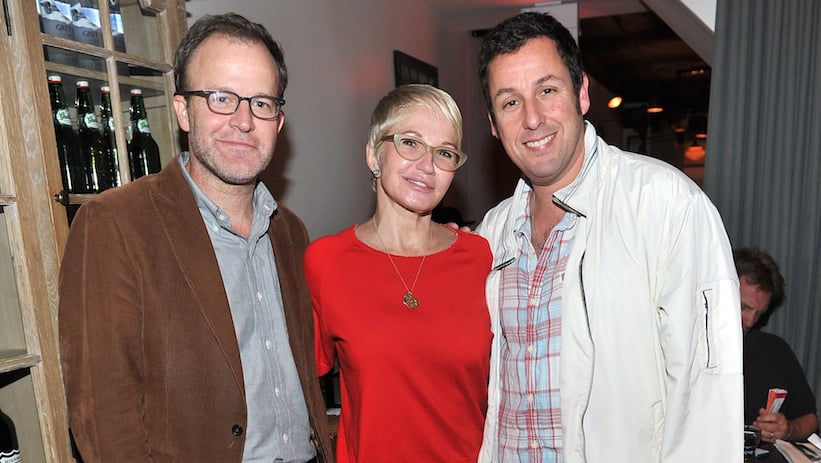 To paraphrase T.S. Eliot (yes, I’m the jerk who is now doing that), this is the way TIFF ends: not with a bang, but a whimper. With most of the splashier films having already enjoyed their premiere parties earlier this week, the bold-face bashes were few and far between Wednesday night. Perhaps the biggest event, relatively speaking, was an intimate dinner at Hudson Kitchen for the cast and creatives behind Adam Sandler’s The Cobbler.

Even though I found the film, er, questionable, the opportunity to meet the one-time idol of my adolescence was too good an opportunity to pass up, even if Sandler only briefly popped out of the dining area to say hello to the plebes. (Yes, his shirt was untucked.) Still, the restaurant’s stellar kitchen was churning out enough fried-chicken sliders and mini grilled-cheese sandwiches (unofficially the party snack of the season) to satisfy the crowd.

Plus, with Sandler still filming his next film, Pixels, in town, we’re bound to run into each other at some point. Adam, I promise to avoid any soul/sole puns, which is more than can be said of McCarthy’s film.