Highlights from the fourth day of the festival, including Reese Witherspoon's latest drama (not that one) and Michael Douglas's sartorial take on Satan 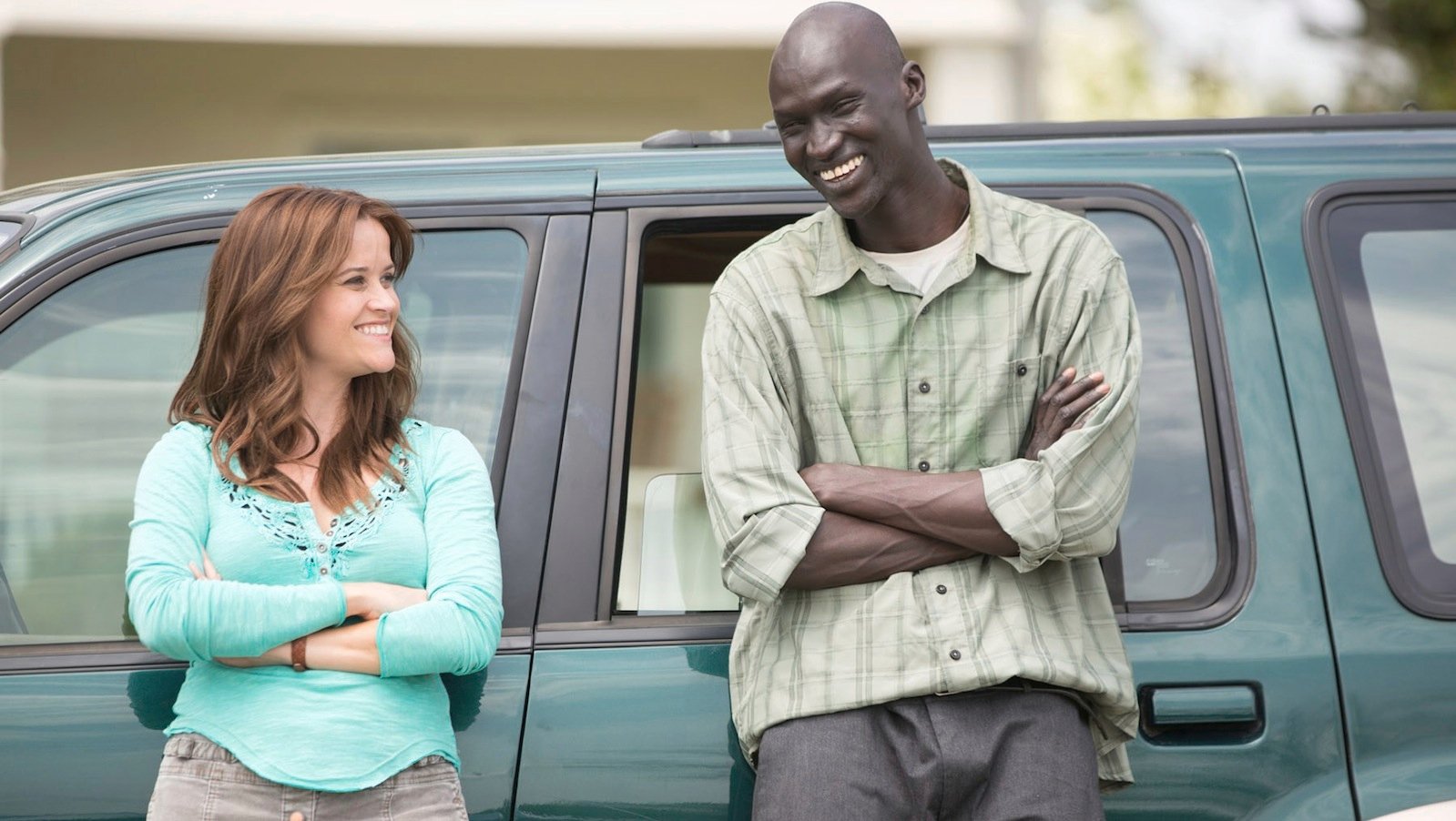 Reese Witherspoon and Ger Duany in The Good Lie (TIFF)

With Sunday morning and afternoon devoted to conducting almost half a dozen interviews (OK, I had five, but writing “almost half a dozen” sounds much more impressive), there was little time to see films at this so-called film festival. Still, I managed to make time for two screenings, while the embargo was finally lifted for one I saw in the days leading up to the festival.

Let’s get the worst out of the way first, as Kevin Smith’s Tusk is perhaps the most infuriating film to play the Midnight Madness program in recent memory. Half an indictment of boys-will-be-boys humour—one that, you know, Smith helped pioneer—and half homage to The Human Centipede, Smith’s latest is insulting and generally despicable. It’s not as if I’m a prude, either: in theory, I have little trouble with the concept of Justin Long being turned into a half-man/half-walrus monser. But to go about it in Smith’s haphazard way is just bad filmmaking. I won’t get into the picture’s depiction of Canadians, because Smith is clearly aware of the grotesqueness he’s created and still doesn’t give a damn. Still, at least someone showed the erstwhile Silent Bob how to finally use a camera. It’s the most compellingly shot and edited of Smith’s films, but that’s about as good as a pair of sneakers on a walrus, which … you know, let’s just leave it be. You, too, Walrus magazine. Don’t even think about partnering with this film, as tempting and obvious as the opportunity may be.

Fortunately, redemption from Tusk was around the corner, with Michel Hazanavicius’s The Search devastating the crowd. While Hazanavicius will forever be known as the guy who won an Oscar for making a silent picture in 2012, The Search is as far away from The Artist‘s whimsy as a good film is from Tusk. Set in war-torn Chechnya in 1999, the director uses two semi-connected tales to examine trauma and the nature of consequence. That may not sound like an easy sell—and perhaps I was just exhausted and more emotionally susceptible than usual—but the drama reaches such an emotional high that I turned into a blubbering (no walrus pun intended, really!) mess.

Speaking of which, I found myself in a similar emotional state while watching The Good Lie, Philippe Falardeau’s drama about Sudanese refugees and the one woman (Reese Witherspoon) who blindsided them all with kindness … I mean, helped them find jobs and a new life in America. Yes, the comparisons have already been made to Sandra Bullock’s massive inspirational hit from a few years back, but Falardeau has a far more deft hand than John Lee Hancock, and it helps immensely that Witherspoon is simply a supporting presence. With the Sudanese characters played by real-life refugees and former child soldiers, the film already had the upper hand in the oh-here-come-the-tears department, and by the end there were few dry eyes. If I had any money, I would bet it all on The Good Lie taking this year’s people’s choice award. (Then again, I lost all my money to poor gambling decisions, so…)

As I was mentioning/moaning about above, the first half of today was rich in interviews, both of the embargoed and free-for-all variety. Up first was a quick roundtable chat with The Good Lie‘s Falardeau, who offered a few thoughts on what it’s like being that other Quebecois director with a Reese Witherspoon movie at TIFF (“I think it’s just a coincidence, guys”) and why he may or may not be unhappy with how Warner Bros. is marketing the film with a big, smiling picture of Witherspoon rather than the film’s true Sudanese stars (“I’ve told Warner my thoughts on that already—don’t get me in trouble!”). As usual, though, the director of Monsieur Lazhar was witty, passionate and generous with his time.

It was then a quick shuffle up a few floors of the Shangri-La Hotel for a one-on-one (rare these days!) interview with Shaun Levy, director of the star-packed family drama This Is Where I Leave You. A native Montrealer, Levy talked briefly about visiting family, but mostly about his transition from the world of kid-friendly franchises (Night at the Museum parts one to 13, I believe) to the more adult drama of This Is Where I Leave You. “I’m a fan of this kind of more authentic, human-scale story,” said the director. “I can still comfortably make those bigger kinds of movies, but if I don’t push myself into an area of slight discomfort, I’ll be missing an opportunity to challenge myself and grow.” The subject of Robin Williams also popped up, as the actor filmed one of his final roles in Night at the Museum 3. “I was shattered by the news,” Levy said. “It’s been extra weird and sad because I’m still crafting the movie and his performance is very central. But conversely, it’s the last piece in a body of work that will live in all of us, so I feel honoured to be a part of that, and in service of that legacy.”

A few blocks south, I joined a roundtable conversation with Michael Douglas, star of the thriller The Reach. While not a great film—hell, it’s not even very good—Douglas still gives excellent villain as a corporate snake who’s read The Most Dangerous Game one too many times. Douglas was appropriately attired, at least, sporting a Mephistopheles-like goatee and wearing a slick black shirt that stood in stark, and assuredly unintentional, contrast to co-star Jeremy Irvine’s white tee. “I enjoy the challenge of playing the psychopath,” Douglas said a bit too matter-of-factly for my liking. “When in life can you just be bad?”

With terror in my heart and sweat on my brow, I left Douglas to talk to Laura Dern, in town to promote her co-starring role in Wild. While I mostly wanted to discuss her great-but-cancelled HBO show Enlightened, Dern did offer a wealth of legitimately interesting thoughts on the status of women in film, and why Wild—a mother-daughter story, at its heart—was such a difficult sell in today’s marketplace. “You can find ways to balance commerce and art,” she said. “This film, for instance, goes beyond feminism: it’s humanism.” Dare I say it was an, ahem, Enlightening discussion? I dare. Oh, I dare.

With transcribing and eating and just a little bit of sleeping to do, Sunday night was light on the social circuit. Still, I did stop by Michael’s on Simcoe for the post-premiere party of Hector and the Search for Happiness. While star Simon Pegg showed up and shared his very own secret for happiness (sparkling water, that rascal), the rest of the room filled up with heavy industry hitters, including producer Robert Lantos. There was enough Moet & Chandon flowing to keep the conversation lively, though, and trays of lobster sushi and chicken tacos in case anyone felt the need to pursue happiness at the gym later this week.